Ramblings of an Idiot: Happy and Busy Days Are Here Again!

Share All sharing options for: Ramblings of an Idiot: Happy and Busy Days Are Here Again!

To steal a line or two from Hank Williams Jr.: Are you ready for some FOOTBALL?!! A [Tuesday] night PARTY! With Chris and Joel and Tex here to get things started.

Our nightmare is finally over, the lock out has ended; Football is safe for another 10 years. Six months of worry, anger, and restlessness came to an end just 2 days ago. We can all settle in with the knowledge that come September there will be real games to watch on Sundays. However, if you name is Scott Pioli or Clark Hunt now is not the time to relax.

Today is the first day that teams can sign undrafted players, and the action has been fast and furious across the league. Friday the free agent lottery begins, with teams like the Chiefs scrambling to spend all of that money they have left over from last season just to make it to the salary floor. Kicking back in an easy chair with the remote and a cold beer won’t be in the cards for our GM or front office executives for another month. To sit back now and take a collective breather would be akin to throwing in the towel on our chance to add quality veterans and promising young rookies.

Let’s start out with a short review of a lot of the information that has been coming fast and furious since Monday:

Whew! That’s a lot going on in a hurry for the club. Keep in mind that free agents won’t be around for Thursday, and probably not on Friday. The process of wooing, signing, and getting whoever the Chiefs sign into camp could take up to a month. Some teams might not be bringing together their full squads until the last 2 preseason games. Those extra camp bodies are going to have to act as stand ins just to have enough players around to run a meaningful practice. As of the writing of this post the Chiefs have added the following undrafted free agents:

There's plenty of information available right here on AP about each of our draft picks. Just choose a post and try to read the comments as fast as they are flying in. Even the bloggers and members of AP are buried in information, speculation, conjecture, and statistics. Man-oh-man is it ever awesome to have football back. By this time next week my head will have exploded from information overload, but then, did anyone really want to read another post that attempts to cover the lock out from an original perspective?

Too many rumors are flying about which free agent stars are going to end up with which ball clubs. I don't have enough solid information to tell you who goes where, but that's not stopping me from reading 15 different football sites and watching the NFL network on the TV with ESPN streaming to a computer monitor.

The obsession with the NFL runs deep and solid all across the USA and other parts of the world. I hear even the state of Canada watches a few games after the snow shoveling is finished. The country practically shuts down for Super Bowl Sunday (except for pizza delivery and 12 pack sales) and the game grows a little more every year. NFL football is long past due to receive a nationally recognized holiday.

No longer should we have to scheme and sneak to try and get our Super Bowl request off's in to the boss before everyone else. Super Bowl Sunday should be declared a National Holiday on the scale of Christmas and Thanksgiving. Every NFL fan deserves to spend the entire day watching 10 straight hours of pregame shows, stuff themselves with nachos, pizza, sausages, potato chips, cold beer, strong whiskey, and cheap cigars. Like Thanksgiving, the traditional foods should be piled high on platters for guilt free consumption in quantities guaranteed to send us running for antacid tablets.

Christmas is for children, but Super Sunday would be a holiday for adults. All day care centers could charge double their normal rates, and no one would bat an eyelash. Super Sunday could have a gift giving aspect to it, where-in each guest would bring presents for the host of the party: 12 Packs, and square boards, and burnt ends...ohh my! We could replace that tired old Santa at the mall with a bevy of large chested cheerleaders. Fans would get to stand in line for the privilege of having the cheerleaders sit on their laps and whisper into their ears [with maybe a little lobe nibbling], "What do you want for Super Sunday, you big strong man?" and "Have you been a good boy this year?" in a breathy seductive voice. 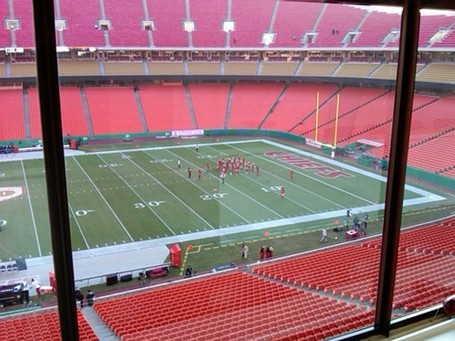 Right here, right now I think we should start the online petition to declare Super Sunday a national holiday. Your vote in the poll will be your signature in favor of the proposal. The comment section below is the perfect vehicle for each and every football fan to give us their idea of exactly what 'traditions' should be attached to our new and joyous holiday. This new holiday can bring country, nay, the WORLD together like no other holiday ever before. Football can span religions, cultures, and maybe even the sexes. Should official team jerseys and skimpy cheerleader outfits become the standard clothing choice for Super Sunday? Is it okay for Asian families to replace nachos with egg rolls?