Can The Chiefs Overcome The Work Stoppage Disaster?

Share All sharing options for: Can The Chiefs Overcome The Work Stoppage Disaster?

From the get go this work stoppage has really torqued my gibs (that's a sailing term that has something to do with the sails. I'm no sailor but I have made the acquaintance of a few so I'll take their word that this means you are annoyed).  Back in March, I sat there and watched the players (with careless abandon I might add) pull the switch that changed a labor disagreement into a modern rendition of the Vietnam conflict (complete with fans wasting away in front of the computer on a daily basis as if watching the war footage, waiting for word that their beloved team had not abandoned hope--just to catch a glimpse of a Chief actually working out) and could think of nothing other than one casualty--the rebuilding of a championship caliber football team in Kansas City.

Will this fan hated conflict hinder or even reverse the Chiefs progress on their trek to a Lombardi Trophy? Just the fact that this possibility exists fuels my anger for the inability of millionaires and billionaires to coexist and play nice.  If the Chiefs stumble this year and jeopardize the World Championship seedling that has been planted and cared for in the Arrowhead soil over the last two years, I just may have to burn a life size Mr. Football doll in effigy.  If you share my angst about the possibility that this lockout could slow down the Chiefs pilgrimage to shangri-la, I would be honored if you helped light the blow torch.

The Pioli/Haley version of the Kansas City Chiefs were well provisioned and well into their journey to greatness when disaster struck.  The lockout has done it's damnedest to suck the life right out of our advance.  We lost an entire off season (and maybe some of the preseason--that is yet to be determined) of 'normalcy' during which the rookies get to acclimate and the vets get in shape.  Some may feel that this is insignificant in the greater picture (particularly the players who currently 'think' they have kept themselves in shape--let's wait and see how many pulled groins and hamstrings happen in preseason), in truth only time will tell.  It may well be something that can be overcome, but the work stoppage is the reason that our team has had to suffer this consequence.  As a result, how much longer than normal will those rookies stumble about in the dark instead of help provide the light to illuminate the road ahead?  How many veterans will suffer debilitating injuries during the preseason that will affect our ability to compete in 2011?

Even Todd Haley has hinted at the difficulties ahead for this season because of the work stoppage.  From Joel's post on Tuesday about the Chiefs training camp start date:

Let's talk through scenarios and decide what's most important when we get back at it and do the best possible coaching job we can, maybe the best we've ever done because that's what it will take."

Haley is admitting that the climb ahead is going to be much more difficult than it otherwise had to be simply because of the work stoppage.  Once again, the Chiefs are left holding the short end of the stick.

The rookies are just the first issue.  What about the free agents?  With a shortened free agency period, Pioli is going to have to move forward with player signings at mach speed because so much has been compressed into such a short time frame.  Alex Marvez of Fox Sports writes:

Initially, a three-day widow is expected to open for teams to sign undrafted college rookies and exclusively negotiate contract extensions with their own veterans set to become unrestricted free agents. The opening of the free-agent market would then follow. Trades would be permitted again, as well.

"It is about to get crazy," one NFL head coach told FOXSports.com on Monday.

How will this affect the Chiefs?  Right now, the Chiefs have 14 UFAs to deal with, 8 RFAs that have (or will have) tenders to deal with, 9 draft picks that need to sign contracts and then the need to fill out the balance of the training camp roster with other teams free agents and undrafted rookies to the tune of around 15 players.  Sound like a lot?  Josh Looney at the mothership thinks so too.

Just how heavy is the total workload ahead? The Chiefs announced a total of 64 personnel moves between February 1st and the beginning of training camp last season.

Because of the stinking work stoppage, Pioli and staff will have to do this in about one sixth of the time it took to do it last year.  I have a lot of faith in Pioli, but there is a limit to what anyone can do.

And in the adding insult to injury department, we now have four players who were named plaintiffs in the Brady vs. NFL anti-trust lawsuit that are (or were, as it now seems that the NFLPA will not support them in this) using what was supposed to be (by the players own admission) a class action suit to wangle their own private deals with the league.  Some want money, others want franchise tag exemptions--for life no less.  Either way, if this little display of self centered greed throws the lockout into another week, the Chiefs problems just continue to grow.

For the last two seasons I have been encouraged and excited by what I have witnessed on the field from the Chiefs.  Much progress has been made and new Hall of Fame careers have been launched.  Coaches both old and new have come together to provide the product that fans dreams are made of.  Twists and turns have been common place but the Chiefs have managed to navigate the passage and give us hope like few squads in the last forty years have done.  Now we find ourselves on the precipice of yet another level of achievement and instead of aggressively staring into the abyss, some are beginning to question our ability to cope.  This year was set to test our mettle long before nuclear winter began.  With the season becoming all the more arduous because of a sand lot fight, the participants in Chiefs red(coaches and players alike) may find themselves tested as never before.  The owners and players had best return to their turf a bit humbled and with hat in hand because this is the time that the team needs it's fans.  All 32 teams have some work to do, to prove that they care about the fans as they said they did during this stoppage.  Until they prove otherwise with their actions, they will most likely get the benefit of the doubt.

Show up, be loud, wear red and never let them forget that they are Kansas City Chiefs.  On July 28th (or a reasonable facsimile thereof) the effort to build a Chiefs dynasty begins--again. 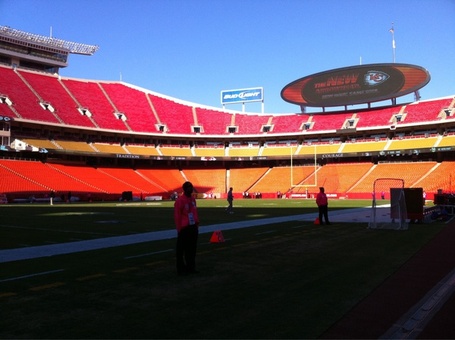