Share All sharing options for: The Matt Cassel Highlight Video

I'm a couple of days late with this but Mr. Wendler of Chiefs Planet and Red Tribe Cinema fame has come out with a highlight video of Kansas City Chiefs QB Matt Cassel. If you don't know by now, Mr. Wendler is Mr. Highlight Video. He's the best at these things.

So check out the latest highlight video of Cassel after the jump. It's well worth the five minutes and 36 seconds.

My favorite part is how it starts -- Cris Collinsworth doubting Cassel. If you remember, Collinsworth said this about Cassel before the season: "When they absolutely have to throw the ball he can throw it out there and complete a pass every once in a while. They're not winning games with the passing game."

And then Cassel goes on to make the Pro Bowl which prompted this image of Collinsworth eating crow: 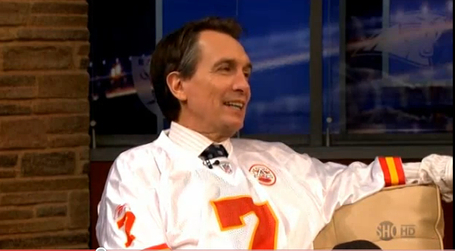 Check out the full video after the jump. There's some bonus footage at the end.