We've talked quite a few times about Kansas City Chiefs rookie WR Jonathan Baldwin so I know what most of us think about him.

The annual video game rates each player in the league and this year they've added some more in-depth rankings that I thought were pretty interesting. Here's what Baldwin's player-profile looks like on the game, via pastapadre: 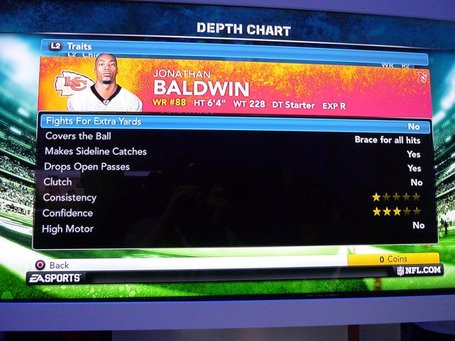 We haven't seen Baldwin in the NFL yet so we have no idea if these rankings will end up being accurate. I, for one, would like to see the clutch and high motor rankings changed by the end of the season. As for consistency, I think that's going to be a major issue for any rookie receiver.

By the way, check out this awesome video of the Chiefs playing the Chargers in the game.