Ramblings of an Idiot: End of the Experiment

Share All sharing options for: Ramblings of an Idiot: End of the Experiment

Step back inside the mind of the idiot for another Tuesday edition. I have been assured by my doctor that my condition is neither contagious nor particularly harmful, unless my ramblings are spouted directly into the face of a hostile fan. Here, on the internet, you are perfectly safe from all but the written beatings of delusional Chiefs followers. Those that know my commenting history will quickly recognize the return to one of my favorite topics. This time I intend to lay out the facts first in a nice neat row before launching into my rant of the week.

The year was 2006, 3rd round of the NFL draft, and the Chiefs pick was an Alabama quarterback named Brodie Croyle. Mr. Croyle lit up the stage at Alabama. He broke records, and won the hearts of fans. He had a chance to be drafted in the first round, except for one tiny problem: injuries. The Chiefs took a chance on him with their 3rd round pick, and the experiment began. Before I get too far ahead of myself I think we should visit that one tiny problem in more detail.

In the first game of Brodie Croyle’s senior high school playing career at Westbrook Christian School he tore the anterior cruciate ligament in his knee. Even missing his entire senior season, Croyle still set state records for career passing (9,323) and touchdowns (105). He once threw for over 500 yards and seven touchdowns in a single game. As a junior he led his team to the state championship game, losing by a field goal. Croyle’s high school career set the stage for his entire football career: good numbers, but losing when it really counts and folding in injury far too often.

Moving on to red shirt at Alabama and starting two games in his second season his coaches voted him as the most improved freshman. In the 5th game of the 2003 season Croyle separated his shoulder. He came back to start the very next game and aggravated that injury. He only sat out 1 game for the season, despite hiding 2 cracked ribs from the public. In somewhat related Chiefs news, Croyle was awarded the Derrick Thomas Community Award that same season. The team finished 4-9 on the year. 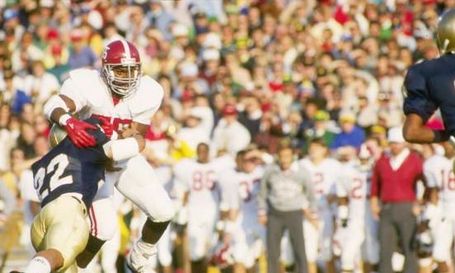 Every post is made better with Derrick Thomas pictures

Croyle started out the 2004 season 44 for 66 (that's an amazing 66.6% completion rate), and then tore the anterior cruciate ligament in his other knee and missed the rest of the season. Brodie went on to lead the 2005 Crimson Tide to a victory in the Cotton Bowl and shared MVP honors, as well as breaking Alabama school records for his 2,499 passing yards and 202 for 349 completions. His most impressive statistic was a 190 pass streak without an interception. He started every game at quarterback in 2005. It's nice that he set those records, but obviously Alabama wasn't known for its passing prowess. And these are the college statistics that the Brodie apologists enjoy pointing to as a way to convince the rest of us that Croyle is a superior quarterback.

Now let's get back to Croyle’s pro career. The Chiefs drafted Croyle 85th overall in the 3rd round. He didn't play much his rookie year, attempting only 7 passes. In 2007 Trent Green expressed frustration that the cards were stacked in Croyle’s favor to win the starting job and Green was traded to Miami upon request. After disappointing pre-season performances Croyle lost the starting job to Damon Huard. In November, Croyle subbed for an injured Huard and was named the starter the following day. In his first NFL start Croyle lost a fumble that led to a game winning field goal by Adam Vinitieri. The following week, in his first home start, Croyle suffered a back injury and missed the next game as well.

Croyle was re-named the starter in early December, and bruised his hand trying to tackle a defender after throwing an interception. In the final game of the season Croyle put forth his best effort yet as a Chief: a 10-10 tie against the Jets. The Chiefs lost the game in overtime by a field goal. In total, the Chiefs with Brodie Croyle as the starter went 0-6 in 2007.

Croyle began the 2008 season as the undisputed starter, and promptly left the season opener with a bruised shoulder after a sack. The Chiefs had so much confidence in Croyle coming back from injury that they went out and signed Ingle Martin to back up Huard and Thigpen. The following week Huard went down with a neck injury and Thigpen became the starter. Croyle was out for 4 more games.

In week 7 of the season Brodie returned to start against the Titans, and left again injured on the 14th play of the game. He limped down the tunnel after slamming his helmet to the turf on the sideline. He would miss the rest of the season with a torn MCL in his left knee. Obviously Croyle was just as upset about his string of injuries as the Chiefs fans continued to be. 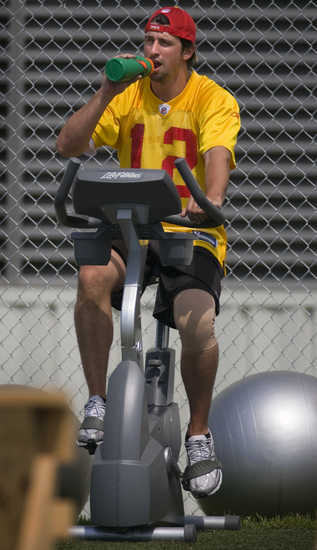 The 2009 season saw Croyle start the final pre-season game and then put on a good showing in the season opener verses the Ravens. The Chiefs lost the opener 38-24, but Croyle went 16 for 24 for 177 yards and 2 TD’s. This is the game that all the Croyle supporters point to every time they try to convince us about his potential. Brodie looked decent in that game, but mainly because he managed to last the entire game without being helped off the field or carted away on a gurney. For all the praise Brodie received, the Chiefs still lost the game by 2 touchdowns. In his professional career Brodie Croyle has won 0 games in which he was the starting quarterback. All his supposed potential has been piled up and managed to produce a sum total of nothing in the NFL.

The 2010 season finally put Brodie in his place, on the sidelines, as opposed to the trainer's table or the exercise bike that Chiefs fans are so accustomed to. Croyle played in 2 games in 2010. Verses San Diego he went 7 for 17 for 40 yards and 2 sacks. Against Tennessee Brodie stepped in for little more than a series. He went 1 for 2 for -2 yards, 1 INT, and 2 sacks before he was pulled out of the game.

My disdain for Brodie Croyle is well known among regular readers to Arrowhead Pride, but it’s certainly not unfounded. Mr. Croyle certainly had some great games as a quarterback in high school and college. He was a star on the rise, if not for his injury troubles. He has played behind a shoddy offensive line for most of his NFL career, and really cannot be blamed for all of his losses.

To be fair, Brodie earned every bit of his reputation as a player with a big upside. The Chiefs were right to take him in the 3rd round, even with his high school and college injury history. The Chiefs took a gamble on Croyle in hopes that it would pay off big. They made every attempt to force feed him the starting job twice in as many years, both times ending in injury and failure. The former Alabama quarterback was an experiment for the ball club. They were ready once again, after a long break from trying to groom their own quarterback, to take a young man in the draft with potential and attempt to turn him into a star. Brodie has had every opportunity the Chiefs could give him to prove his naysayers wrong.

Croyle fell in the draft because of injury concerns. He's trashed both knees and one of them twice. He's had repeated shoulder problems as well as freak hand and back issues. He's not done well as a starter aside from one game in which the team lost by two touchdowns. After a four year contract Croyle was retained for $1.759 million in 2010 as a restricted free agent. Croyle is not worth $1.7 million to the Chiefs. Our beloved ball club has just selected Ricky Stanzi in the draft. We have a new project to work with as a future starter for the team. Matt Cassel is the current undisputed starter that needs to display his ability to continue to improve. Ricky Stanzi completed 221 of 345 passes for 3,004 yards in 2010, making him yet another quarterback to exceed Croyle’s Alabama record for passing yards.

The Chiefs need a veteran back up to Matt Cassel, and a young man to groom. Croyle doesn’t qualify for either of those positions in my opinion. The experiment is over. It’s time to move on from Brodie and look to the future of the team. As a Chiefs fanatic I thank Brodie Croyle for all his effort and wish him the best wherever he may go, but I don’t think he’s one of the right 53 to move forward with the team. Brodie's injury history, coupled with his inability to win a game with the Chiefs, has made him obsolete.