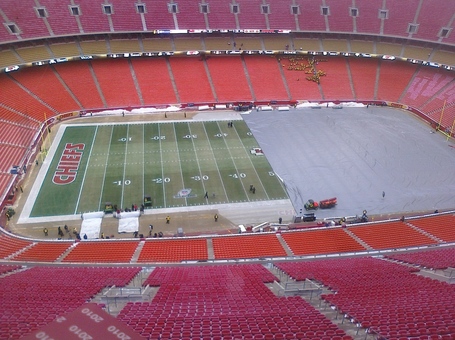 This is my first front page article so you have to take it easy on me.  I just can't believe the Thorman Brothers trust me enough. There might be something wrong with them.

Joking aside this weekly column will be pretty much a recap of the weekly events on Arrowhead Pride.  It will differ every week but always contain some of the biggest stories and I then will give my opinion on the subject.  Hopefully, these will bring up more discussion on the topics.  I also wanted to do this for the busy Chiefs fans that might have missed something.

I am tired of meetings and I want some production.  I set my mind to miss football this season but it feels so horrible.  I honestly see where both sides are coming from but there has to be a happy medium. Every year there is money to be made and fans to make happy.  This could go down as the worst year in NFL History.  I hope in a few weeks the lockout stops and we can all get into football mode again.

It seems like every year we are gaining ground in this area.  If football happens this year then we will have 4 games in primetime.  Yes, 4 games where a wider audience can see how improved we are as a team and organization.  The players might be in the main spotlight but the front office and coaches will receive some attention as well.  Just think what we will rank if we make the playoffs again with the schedule we have this year.  It will be amazing to see how our organization can adjust.

I can't say enough about how much a leader Cassel is.  I also can't say enough about how we made the right pick-Jonathan Baldwin.  Not only did they work out together but also went to Joplin to help out.  This is a part of the reason why these guys will stay Chiefs.  They step up to help those in need and work to become better football players.  There are quite a bit of players out there that just collect the paycheck and that's it.  I am hoping that Pioli and company weed out all those types that might be on our team.

I would not want to be a coach in the NFL right now.  I think they are in the toughest position and are being pulled multiple directions.  On one hand you have the management and organization to worry about.  Then on the other hand you have the players.  If a coach stays out of it then some might think he doesn't care about the players or organization.  If a coach gets too involved then he might look to be more on one side than the other.  It isn't a game and should be handled delicately.  So far I think Haley is doing a great job.

5. Jamaal Charles: Incredible 2010
This is one of my favorite articles and breakdowns this past year.  Jamaal Charles continues to amazing yet still has so many critics.  I'm not sure what more he could do besides fly that would get people to believe that he is indeed the man.  These stats are mind-blowing and truly show how great Charles is.  I honestly think he should be in the top 5 at the running back position and certainly above Arian Foster.  I'm not being a homer I'm being realistic.

In Case You Missed It...

Thanks to bfett81 for a nice post in regards to a PFF article.  It just goes to show you that even without a good deep ball somehow Dwayne Bowe is still targeted.  I'm wondering what is going to happen now that we have an actual #2 WR?

A good post by dubld about our defense.  There are a lot of good comments and discussion that goes along with this post.  In my opinion there are a couple major holes in our defense that will be filled as our younger players develop. We still have another year before our defense can be considered elite.  Our offense might be there with some quality free agents this year-especially on our o-line.

Fanshot Of The Week

This is a great thing for a rookie to do early on their career.  He is letting the fans know that he cares and is going to help the organization.  Also, he is a towering monster in the picture.

Quote Of The Week

"OK, this obviously isn't an actual revenue replacement during the lockout but, for some reason, I find these KC Wolf visits pretty hilarious. I asked Ms. Primetime if I could send KC Wolf to her office for Valentine's Day and she declined while I also asked my Mother if she would like one for Mother's Day but she opted to pass, too.

Someone has to get this and secretly film it. I can't imagine KC Wolf walking into someone's office or busting into a family party to surprise your dad on Father's Day." -Joel Thorman (Source)