Players aren't allowed to talk to the coaching staff during the NFL lockout but the Kansas City Chiefs and the league made an exception as a large group from the organization including players, coaching staff and front office employees made the trip down to Joplin to lend a hand in the tornado relief efforts.

The only time they have been allowed contact after the lockout began in March was a short window on the Friday after the NFL draft in April. On that morning, the NFL lockout was lifted only to be instituted again later that afternoon.

Chiefs QB Matt Cassel was one of the players that went into the facility to meet with the coaching staff while the lockout was lifted. Since then, he hasn't been able to see or speak with the Chiefs coaching staff.

Here's a photo, courtesy of Nima Shaffe of KCTV5, of Cassel sitting only a few feet from Chiefs new offensive coordinator Bill Muir. 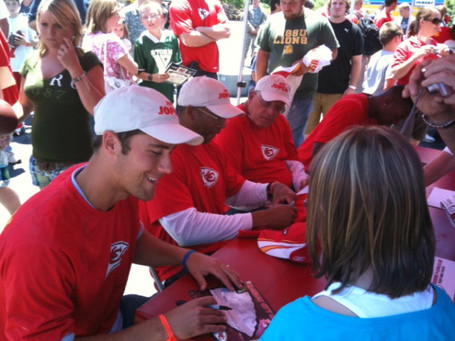 Gotta be hard not to talk shop when these guys are together.

That's WR Jonathan Baldwin at the end there. Here's a closer shot of him, courtesy of the Chiefs official Twitter account.