Scott Pioli's Big Adventure: Dynasty In The Making Or Flash In The Pan?

Share All sharing options for: Scott Pioli's Big Adventure: Dynasty In The Making Or Flash In The Pan?

It's too early to definitively say what Scott Pioli's influence on player personnel will do for the Kansas City Chiefs. With only about two and a half years and three drafts under his belt, Mr. Pioli has definitely made an impact in terms of changing that personnel. Most fans (based on Pioli's approval ratings anyway) seem to think that he is making good changes and that he has improved our team.

Now that the initial (and very successful -- AFC Champs in year two) chaos of beginning a new regime has been overcome in KC, I wonder where in the spectrum the fans think Pioli falls. To date, has he performed above expectations, met expectations, or fallen below expectations? Do we have the nucleus of a Super Bowl winner or are some of us just letting the love of our team blind us to a very average football team that is currently in the spotlight due to the external factors of a weak (last season's) schedule and even weaker division?

As I say, the jury is still out but we can discuss the facts of the case as they are not in dispute. 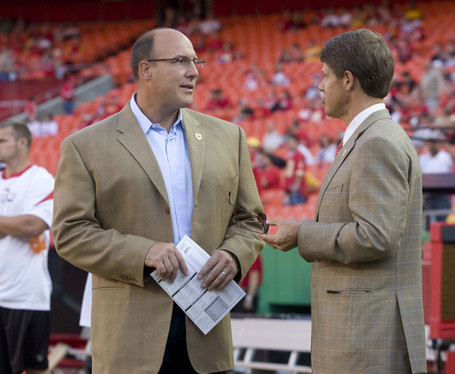 Way back in the dark ages (2008 to be exact) the Kansas City Chiefs were the kick dog of the NFL. We were teetering on the brink of becoming the new Detroit Lions or Tampa Bay Bucs of the 1970's. The Chiefs were down and nearly out by virtue of winning only two games that season. The reasons are many for that putrid season, but we are not here to rehash and bash what has gone before. Instead, let's look at how we are different now and whether or not the new state of the Chiefs is continuing to improve or is stalling out.

First off, it's important to note what was here when Mr. Pioli walked in the building. That 2008 draft produced seven players that are still very important parts of the team today. Say what you want about Herm's coaching ability, but some small amount of credit for today's Chiefs must go to him for a portion of today's squad. Five of them (DE Glenn Dorsey, LT Brandon Albert, RB Jamaal Charles, CB Brandon Flowers and CB Brandon Carr) are every day starters, while Barry Richardson and Brad Cottam have both started with Barry getting more playing time due to Brad's injury. That means that six relatively regular starting players were on board when Pioli stepped in the building. That's actually 27% of the 22 starters (offense and defense) that we needed. Since then, the additions have been often surprising and yet, crowd pleasing.

The following chart shows all the starting players each year from 2008-2010.

In addition to the above six mentioned players already in house when the 'Don' arrived, we have to also add in those players that were here but have changed position. LB Tamba Hali, DT Ron Edwards and LB Derrick Johnson all moved into new spots when we changed to the 3-4 defense, but they were all on the squad when Pioli took over. G Brian Waters and WR Dwayne Bowe are still playing the same slots today that they were in 2008, and Mike Cox is still hanging around at FB. That brings the total up to 12. Twelve starting players of the 2010 Chiefs were on the team back in 2008. Thats over half! Thinking about it that way is somewhat surprising considering that it seems like all we have done the last two years is add new players via the draft and free agency.

So who were those 10 new faces Pioli brought in? QB Matt Cassel and LB Mike Vrabel came from a trade with Hoodie. G Ryan Lilja, RB Thomas Jones and WR Chris Chambers all came through free agency (and, for Chambers, initially through the waiver wire). The other five came through the draft -- TE Tony Moeaki, DE Tyson Jackson, LB Jovan Belcher, S Eric Berry and S Kendrick Lewis.

That's basically one trade, one and one half free agent pickup and two and a half draft additions per year. How's Pioli's track record? I think you have to say he's batting well over .500, wouldn't you? In fact, I'd say that the worst performer on this list is Chambers. Even he helped out quite a bit in '09 when he was playing to extend his contract, but after that he sort of disappeared. Maybe his injury had something to do with that, but it sure looks like there was more to it when the player becomes a healthy scratch in a regular season game on a team that is so thin at receiver that some fans were considering calling Eddie Kennison out of retirement.

Mike Vrabel wasn't brought here to do anything but train the future and I think our defense has benefited from his leadership in teaching these guys how a 3-4 is suposed to run. Ryan Lilja should be able to hold down his position for another couple of years and his experience with some zone blocking schemes should also be helping the o-line gel. Thomas Jones comes in and has nearly a 1,000 yard performance at they ripe old age of 32, in the same backfield as Charles, which is really pretty incredible no matter his age.

Berry, Lewis and Moeaki look like homeruns so far. Jackson appears to be coming along OK as well. Some are not too happy with Mr. Belcher right now, but who knows what a healthy Cam Sheffield will turn in and how that will affect the rest of the linebacking group? None of this discussion even begins to take into consideration the Shaun Smiths and Wallace Gilberrys of the world. Those guys and others like Studie give us depth and potential unlike any we have had in recent memory.

At this point, I think at the very least you have to give Pioli the nod toward the Dynasty side of things. It puts the old days under King Carl to shame. You listen to Pioli and you get the feeling that he's got it covered. You can tell that he is managing today's squad, but more than that, he's always looking to the future and running scenarios of how to not only get to the Super Bowl, but to continue to compete at that level once the Chiefs have arrived there.

Just look how this years draft crop falls into place with the past two years. Chris Chambers can't cut it? Jon Baldwin to the rescue. We already have G Jon Asamoah waiting to take over somewhere (remember Ndukwe and Guiciauc? It hurts to think about that!) on the offensive line, but the 'Don' also added Mr. Rodney Hudson to take up Casey Wiegmann's slack. Jerrell Powe is our first ligitimate shot at building our own nose tackle. Then, just in case, Pioli picked up an outside linebacker (Justin Houston) , another defensive end (Allen Bailey) , and a cornerback (Jalil Brown) to cover the worry warts that think Belcher, T-Jack and Carr won't make the grade. He's laying the foundation for home grown talent that will sustain the Chiefs far into the future. And the beat goes on.

Last but not least is Pioli's motivation itself. Pioli is a hard worker by nature and believes in what he can achieve by the sweat of his brow. That alone should be enough, but I can't help thinking there's more.

Scott Pioli should be aware of a perception by some out in the ether that he owes his success to Hoodie. That Scott was merely the pupil in that relationship and his input was minimal. Whether or not that was true, Pioli now has the opportunity to produce his own play on his own stage and his burning desire is to recreate Shakespeare with his own twist.

In my book, Pioli has already succeeded. He stepped in and took the reins of a team that was in dire straits and in a scant two years helped make that team division champions again. That is no small feat. Two more of those years under his direction and the Lombardi should sit behind the glass at One Arrowhead Drive. If you doubt that, consider the following.

In Pioli and Todd Haley's first season they doubled the win total of the previous season with A) a first year head coach calling his own plays, B) a new defensive coordinator who installed a defense that nearly all of the players had never played in, C) a seven year backup QB who had just transferred in, and D) the angst of an entire squad of football players who were pissed off because they had been forced to collectively shed over 800 pounds just to make the lousy team they were on.

In their second year, with a few very precise coaching and player changes, they engineered the biggest one year turn around in Chiefs history and took the AFC west crown. Now, the doubters want to cast aspersions because our schedule toughened up? What exactly were the last two years spent doing? Creating a football team or a sewing circle? My money is on the former.

Dynasty in the making or flash in the pan? Let's just say that the only flash you'll see around Pioli is from the photographers taking pictures of the trophies he helped bring to KC.