Share All sharing options for: Ramblings of an Idiot: Chiefs Success Story

Abhorrent, bad, careless, disastrous, easy out, flawed, ghastly, horrendous, idiotic, just dreadful, killing themselves, loathsome, mockery, nauseating, odious, poor, quizzical, revolting, shockingly awful, terrible, unwatchable, vile, wretched, xenopus, yahoos, and of course Zzzzzz: These were the ABC's of the Kansas City Chiefs in recent memory. These are the kinds of words that were used to describe my favorite NFL team's play and it's players over the last several seasons. (OK, maybe I'm stretching it with the African clawed frog; but I really needed an "X").

Change is inevitable for all walks of life, and sometimes changes are for the better. Change came once again to the Chiefs with the hiring of Scott Pioli and Todd Haley, but this time change is smiling down on the team rather than giving us false hope and broken promises. A little over a year ago I wrote a post for Arrowhead Pride to try and identify exactly what our Chiefs needed to do in order to right the sinking ship of the franchise. Today I'm happy to look back at that post and stare into the future with a grin on my lips. Go ahead......click that link and check out the reasoning behind the items that I've identified as team needs. Really......go read it. We can't move forward without understanding our past.

OK, good......you're back. Now we can put that debauchery of a team behind us and see how we've done at fulfilling some of those needs.

The Chiefs have never made the playoffs in a season where they gave up more than 332 total points on the year, and only one time did they ever have a winning season when they gave up that many points. Focusing on the last 3 seasons alone will really keep our collective spirits up concerning the direction our team is headed. The 2008 Chiefs gave up 440 points and finished the year (2-14). A season later the defense allowed 424 points and the Chiefs ended at (4-12). My first listed need was for the Chiefs to hold the opponents to 332 or under. The 2010 division winning KC team managed to hold up their end of the need. We allowed our opponents 326 total points. In fact, the Chiefs held their opponents to 2 touchdowns or less an amazing 8 times in 2010. If Romeo Crennel never does anything more than hold the line on our points allowed stat the Chiefs have a chance to become perennial playoff team.

Our second need on the list is a target number for running yards allowed. If you read that linked post you know all you need to know about how important the 1800 yard target has been for the Chiefs in the last 20 years. The 2008 (2-14) version of the Chiefs let opponents run roughshod over them to the tune of 2,543 yards. One year later we didn't fair much better at 2,504 rushing yards. But, in 2010 the newest rendition of the our team made themselves stout against the run. The beginning of the season had the best results in run stopping and even though we let a few more yards pile up at the end of the regular season we still finished below the target. 2010 gave us a Chiefs team that held every other team in the league to a combined 1,764 yards on the ground. With the addition of another nose tackle to spell the aging Edwards, I have complete confidence that in 2011 we can hold true to fielding a defense that can stop the run. I'd still love to have a gold plated inside linebacker to focus on crushing backs at the point of attack, but even our hodgepodge run stuffers were up to the task last season. (Seattle needs to move Curry to the middle or trade him to a team that will stop wasting his talents by trying to use him as a pass rusher).

The turnover ratio was the bread and butter of the Schottenheimer era. Simply put, no one did it better. Marty's Chiefs posted double digit positive results in the turnover category year after year. Vermeil, Cunningham, and Edwards were not up to the task. Haley's group has shown major improvement in 2010. The Chiefs managed a +9 turnover differential last season, just one shy of the double digits. And if Carr would have caught any one of the exaggerated 439 sure interceptions that bounced off his hands, arms, and chest they could have led the league. By comparison the '08 and '09 teams managed to turn in +5, and +1 respectively. This stat has a lot of room for improvement, but the Chiefs still managed to exceed the 'need' of a +5 or better mark in 2010. Most Chiefs fans are counting on Berry to continue to improve on his read ability, and get a few more chances to jump a route for a ball. I also believe that Carr can't possibly have another season where he's in the perfect position that many times and just doesn't hold on. I'll toss this out there today: The Chiefs will finish 2011 with a +15 or better mark in the turnover differential.

That brings us to offensive balance. The Chiefs needed to run for at least as many attempts as they tried to pass the ball. "But TC!", you shout, "All Edwards did was run the ball, and we sucked!" Well, well my fellow Chiefs fans, perhaps you let your eyes lie to you. Herm's 2008 Chiefs threw the ball 541 times. They only completed 310 of those throws, but they still threw it 162 more times than they ran the ball (379 times). In Haley's first season with the Chiefs the team didn't do much better at running a balanced offense. That Chiefs team threw the ball 536 times; almost 100 more times than the 438 run attempts. All that extra throwing resulted in six wins over two full seasons. I think Haley must had read my post last off season because the 2010 playoff version of the Chiefs flipped those numbers with 556 runs to 475 passes. Am I suggesting that we run even more? Not at all. The Chiefs need to have a balanced attack, with a tiny nod toward the run if there is going to be a nod at all. Lop sided teams are too predictable, and predictability leads to losses. Last season the Chiefs did a good job of balancing their attack on the field. They were within 70 plays of completely balanced. They can afford to toss an additional 45 balls to Baldwin and 25 to McCluster and still maintain the balance.

We're headed right back to the running game. The Chiefs next need was to run for more yards than they allowed other teams to run on them. Again, looking at 2008 and 2009 we peer into the stats to see that the Chiefs ran for 1,810 and allowed 2,543 in '08 and then followed that up running for 1929 and letting 2504 yards get past them in '09. We were terribly lop sided for two years in a row at over 500 yards out of balance. Once again, the 2010 Chiefs have fulfilled the need. 2010 brought an epic run game back to Missouri. The Chiefs completely dominated their opponents in the running game; grinding out 2,627 hard fought yards while giving up only 1,764. That's almost 900 yards of lopsidedness! There's no way to call yourself a Chiefs fanatic and not be impressed as well as pleased with that statistic. Not only did the Chiefs meet this need, they obliterated it. It's going to be a hard act to follow in 2011, but with the additional weapons in the passing game, the continued improvement of Moeaki and McCluster, and some youth at center and guard on the offensive line the sky appears to be the limit. 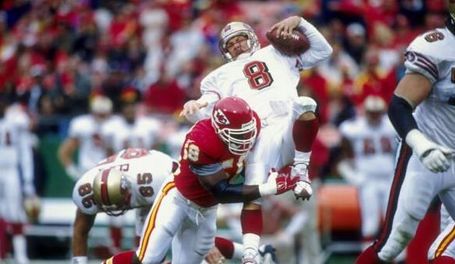 The final need that I identified before the Superbowl kicked off over a year ago was this: The Chiefs need to finish the season with more sacks than they allow. If you weren't counting, that was a list of six needs to make the playoffs and end with a winning season. The Chiefs not only made the playoffs, but they also won the division. It shouldn't be too hard to guess if the Chiefs achieved this last need. Indulge me first while we look at the previous two seasons before I spoon feed you the answer. The end of the 2008 season displayed a defensive unit that managed to sack the QB ten times. Yes, you read that right.... ten, for the entire season, for the entire team. The offensive protection team allowed our QB to eat turf 37 times during the same season. It was an abysmal year for rushing the passer. For a defense lover, such as myself, disgust was not a strong enough word to describe what I felt about a defensive unit that allowed 2,500 rushing yards and only got to the QB ten times.

In 2009 the red and gold more than doubled their sack total, up to 22. Unfortunately, doubling the worst mark in the league doesn't mean much. It means especially less when the same team allows their own QB to be slammed into the dirt 45 times. If 2008 was disgusting then 2009 was putrefying. Which leads us back to 2010. The Chiefs woke up and gave the fans the biggest turnaround of the season. Our KC beloved turned in a positive sack ratio. The 2010 team chalked up 38 sacks while holding the other guys to 32. That's not the best part. Houston and Hudson, two of our top 3 picks, are in a perfect position to continue to build on that improvement. Youth at the center position should aid in keeping the older Weigmann fresh. And a situational pass rusher to compliment Hali and expand Crennel's creativity in fire zone blitz packages gives our team the potential to do something really special in 2011.

Awesome, brutal, commanding, dominant, extravagant, famous, glorious, highly regarded, impressive, jumbo, kingpins, lofty, mammoth, noteworthy, outstanding, prodigious, quote generating, renowned, superlative, transcendent, unstoppable, vastly talented, wonderful, xenolith, youth fulled, and zyphyr: These are the ABC's of the Chiefs future. The wind of change has blown into Arrowhead stadium. Even without the African clawed frogs on their side the Chiefs are have turned the corner on hopelessness and have an eye on greatness. The road ahead is paved with golden bricks.