How awesome does it feel to see a headline around here with the words: Chiefs Practice Report. It's been quite a while since we've had one of these so I'll see if I remember how to do it. I'll have some more quotes and other stories coming throughout the day.

This was definitely Matt Cassel's show. Every player we talked to noted that Cassel set the whole thing up from arranging the location to getting the guys together. Lots of leadership talk from the players when it came to Cassel.

Cassel does his best Todd Haley impersonation. Cassel was on the field directing traffic as QB Ricky Stanzi and QB Tyler Palko took snaps in 7-on-7 and 11-on-11 drills. Cassel took some snaps himself but when he wasn't leading the charge at quarterback he was barking out plays and telling guys to line up in certain places. He was clearly the coach of this practice. He even had the defense doing push-ups at the end. Haley would be proud.

Attendance was very good. It was hard to get an accurate count but 44-45 guys showed up according to mine and other media members' numbers. Notables missing included OT Barry Richardson, OT Brandon Albert, LB Tamba Hali, LB Mike Vrabel and G Brian Waters. I would guess Vrabel and Waters are involved in labor stuff. I wish I could give more details on the rookies but I just don't know their faces and don't want to incorrectly call someone out for not showing up who was actually there. Blame me. That's my bad on not recognizing these guys when I should. 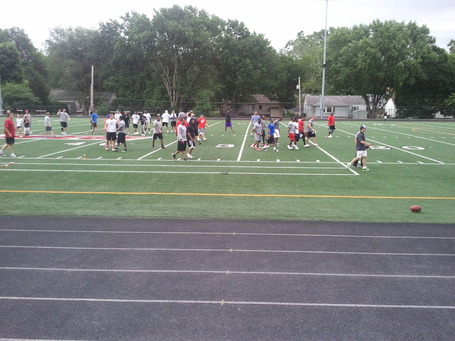 Jonathan Baldwin looks like the total package. Big, strong fast...the dude looks like a legit receiver. Without pads, it was hard to get an accurate gauge on how he did but he caught most balls thrown his way and showed some speed.

Cassel reminds guys to be careful. I was standing near the corner of one end zone and Cassel hit Baldwin in the corner with very tight coverage. The defensive back was right in Baldwin's face but he still outmuscled him and caught the ball, got his feet in bounds and fell out of bounds tumbling to the ground. Cassel came running up the field and said, "Guys, I know it's competitive but be careful."

Shaun Smith is still the man. It's so much fun being in a position where you can hear what he says on the field. He was talking after every play, getting the defense fired up and talking some (friendly) trash talk to the offense. Besides seeing Baldwin, Smith's talking was the highlight of practice for me.

Practice attire was shorts and a shirt. The players didn't wear helmets and most of them wore shorts and a t-shirt. A couple of the running backs, Jamaal Charles and Thomas Jones, took their shirts off and, yes, Jones appears to still have the biggest biceps on the team.