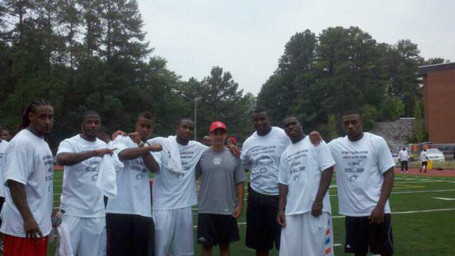 Over the past few weeks and months, Kansas City Chiefs players, including QB Matt Cassel, have been working out at a local high school. Cassel has apparently been spear-heading these practices, according to reports from the KC Star, and several receivers have showed up to work with him.

As for the defense, we've heard of only loose plans of them getting together. Last month, Chiefs S Eric Berry, who has been working out in Florida with CB Brandon Flowers, told 810 WHB that more players were expected to get together the following month (June).

"I feel like we'll be getting together pretty soon," Berry said in the interview on May 20. "Probably early next month and probably come up here with Matt [Cassel] and do some one-on-ones and things like that. "

Well, it's now early into the next month and Flowers wrote on Twitter this morning that he's headed back to KC for the first time in six months.

So I wonder if that's for a series of workouts with other Chiefs players.  In a normal offseason, OTAs would be wrapping up about now and players would be going back to their offseason waiting for training camp in late July. Maybe in this not-so-normal offseason, the team workouts are just starting for some.

It's also possible that Flowers' trip to KC is completely unrelated and this is yet another example of me grasping for some semblance of Chiefs news during the NFL lockout.

[Update: Chiefs NT Anthony Toribio, and others, also say they're on the way to KC. Hmm...]