Should Chiefs RB Jamaal Charles Be In The Discussion?

Share All sharing options for: Should Chiefs RB Jamaal Charles Be In The Discussion? 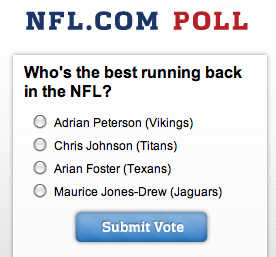 Even though I don't hide the fact that I'm a Kansas City Chiefs fan, I try not to be a total homer when I write about them. I recognize Dwayne Bowe has flaws despite the fact he lead the league in touchdowns. I know Brandon Flowers isn't the fastest player in the world even though he's one of the league's best cornerbacks. It's important to make sure that, when you're talking about your team, you're being realistic.

With that said, I'd like to look at the latest poll at NFL.com, which you can view on your right. As AP user Chiefsfan85 points out, there's a familiar name missing from the list.

Yes, we're talking about Jamaal Charles. It seems a little odd that a player who's in the discussion for the league's best back isn't included in a poll asking who's the best. I'm trying to be realistic but I can't figure it out. The argument that he's a part-time back doesn't hold much weight with me because at the end of the day it's all about production and Charles produces like he's getting 300-plus carries.

It almost seems blasphemous to consider Charles a better back than Adrian Peterson and guys like Maurice Jones-Drew do so much for their team but the stats clearly say he's been the better back.

Maybe Charles needs to turn in another nearly-record-breaking season to be mentioned consistently as the league's best back. Frankly, I thought we were past the point of him being ignored. He had that strong finish to the 2009 season, which some wondered whether it was a fluke, and then he played even better for a longer period of time in 2010 so it's not like the evidence isn't there.

Or it's also possible I just need to tell myself: It's just one freakin' poll. Calm down, Joel.