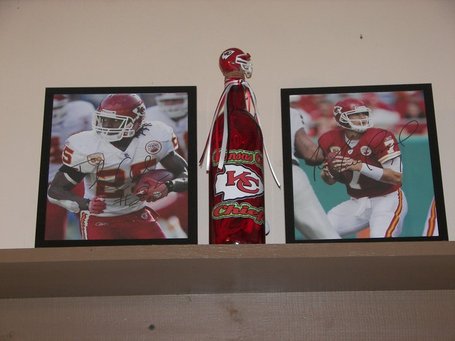 Wow, another Friday is here along with another weekly update.  There was not a whole lot out there this week but as always some interesting posts by you guys.  I promised you guys a picture of that useless bottle that I bought that I'll never use.  Yes, I am that cool everyone.

I am highlighting three great fanposts this week in case you missed a few days of internet or actually had to work. If you feel like re-reading about Bowe, Charles, and the lockout then please continue along.

I think we waited all season last year for it to be confirmed that Charles would see more carries.  I'm not saying that the season was a waste or that the workload ratio didn't work.  I'm just saying that Charles is a beast and needs up to 50 more carries.  Jones is great especially in goal line situations and I love that he is on the team.  I also am wanting to see more of McCluster.  A couple of his runs were so exciting last year although I remember the long ones that were called back the most.

I think that 45 is perfect for Bowe in all honesty.  I also think that Kirwan had him ranked accordingly in group B out of all the WR's in the league.  Haley was his usual self while presenting and some great footage was shown.  I think that this season Bowe will take the next step in becoming elite.

As we as fans struggle with more lockout Hunt's approval continues to struggle.  His rating is the lowest it has ever been sitting at 42%.  Do you think that it will ever climb back up to the 90's where Hunt usually is?

Another positive coming from the Chief's organization.  There are a lot of things that the organization can do or choose not to do.  It is great for us that they are helping out the people who give them so much support.  I think this is just amazing.

I'm just wondering when I'll be invited to such "secret" talks?  It is great that both sides are trying to talk it out.  I just wish like most of you an agreement is made fast.  I'm really not sure what I'll do without football.  My father-in-law says there is always Arena Football.  No thanks.

In Case You Missed It...

1. Ramblings of an Idiot: End of the Experiment

This is a great front page post by Texas Chief.  I am one of those people that like Croyle and want him to be successful.  However, I am also running out of patience.  He has had plenty of time to prove to us in a starter and backup role that he is the man.  I'm on the fence about keeping him or getting rid of him.

2. The Case For Charles

I really like this fanpost by wustl_chiefs_fan.  I left a pretty lenghty comment already in the post about why people aren't exactly sold on Charles all the way.  I'm pretty sure with a bigger carry load this season that some doubters will finally rest.

Fanpost Of The Week

There is nothing better than some history mixed in with how it relates to our current situation in football.  There are already over 100 comments and some great discussion.  I know you want to add to it!

Fanshot Of The Week

I love Cassel and how passionate he is about the game.  This video shows just that talking to his old team.  It is finds like this that make Arrowhead Pride so great.  Keep posting guys!