Ramblings of an Idiot: Influence or Influenza

Share All sharing options for: Ramblings of an Idiot: Influence or Influenza

It's Tuesday again, and time for Chris to let the idiot out his cage for another edition. At least this week Joel forced Chris to provide me with water and a beard trimmer. Today I'll be burying you in QB statistics directly related to Jim Zorn's NFL coaching career. It has been proposed by many an APer that Jim Zorn joining the Chiefs as QB coach has the strong potential to shine the light of greatness onto Matt Cassel's NFL starting QB career. Before we talk about Matt Cassel, I think it's important to look at the past as an indicator of the possible future.

Jim Zorn is a well respected QB in his own right. He was the second player inducted into the Seattle Seahawk's ring of honor. Zorn was a starting QB in the NFL from '76-'83, and a back up for another 4 years. He also played as a replacement player, limited to 1 game, for the Buccaneers during the strike of '87. Chief's fans over the age of 30 will remember the scrambling Zorn from the division rivalry games before the league restructure.

Jim Zorn is considered, in many circles, to be a phenomenal QB coach. A lot of people that know a lot more than I do have credited him with the development of Matt Hasselbeck. Let's take a more complete look at the QB's that played under Zorn as a QB coach and some of their statistics before, during, and after Zorn's coaching. Although Zorn was a QB coach for Warren Moon, I won't be including him. Moon had been in the league for 13 years by the time Zorn worked with him, and Moon was on the downside of a fantastic career spanning 4 teams. In fact, after Seattle, Moon went on to his final NFL team in what I consider one of the dumbest QB moves in the history of the NFL. In case you haven't guessed yet, Moon became a Chief in 1999.

Charlie Batch was a rookie with Zorn, so there are no 'before' statistics to refer to. Matt Hasselbeck was a back up QB in Green Bay with no real usable numbers to look back upon. I've already eliminated Moon. This leaves us with 3 players (Campbell, Flacco, and Cassel) that have statistics the year before the influence of Zorn. Statistically speaking, none of the 3 were terrible QB's before Jim Zorn arrived to mold them. Flacco stands out as the only one with a completion percentage above 60%, but neither Cassel nor Campbell were very far under that mark.

Personally, I tend to throw out attempts and completions when looking at a QB, unless they had so few attempts as to skew the numbers. For instance, Matt Cassel was a 71% passer in final year as USC, and a 75% passer 2 years before that (Of course, he was a 75% passer who completed a total of 3 out of 4 passes). Attempts and yards have a lot more to do with the style of offense the team runs, and what their run/pass ratio is for the season. The following table is a look at the first year for QB's with Zorn as a coach. All but Campbell had Zorn as a QB coach; Zorn was the head coach over Jason Campbell.

*note: all statistics for this post are taken from http://www.pro-football-reference.com/

We're looking at 2 passers in their first partial starting campaigns (12 games each), and 2 players that had started before. Hasselbeck is the dog of the bunch with an upside down TD/INT ratio and a sub 55% completion rate. Both the 'rookies' have taken an inordinate number of sacks for a 12 game period. In fact, Campbell and Flacco took almost the same number of total sacks in 25% more starts. Batch earned accolades for his rookie campaign based on his completion rate and TD/INT ratio, but as you can see, both Campbell and Flacco were better in both categories.

The interesting thing to look at is the comparison between the year before Zorn and the year after with Campbell and Flacco. Campbell's completion % jumped, but he threw for the same number of TD's in 4 more games as a starter. While Flacco's % seems to have dropped (all be it only slightly) while he takes more sacks, but throws less INT's. In my view, Flacco is a statistical wash with Zorn as a QB coach; while Campbell appears to have benefited from a west coast offensive style that inflates completion percentages with short range passes. 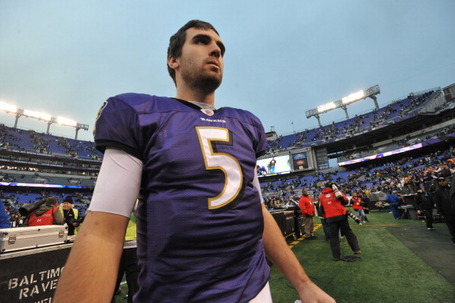 The year after Zorn leaves a team is another place we can look for some information about the influence that Zorn has on his QB's. Let me say up front that their isn't a lot of data in the pool, and for Hasselbeck we'll be looking at 2009 rather than 2008, because Hasselbeck started less than 1/2 of the 2008 season. Also, there is no 'year after' for Flacco to compare to anything. Still, I think it's a worth while exercise to look and see what the numbers tell us.

Charlie Batch doesn't seem to suffer much from the loss of Zorn. He throws a few more INT's, but his completion percentages in '99 and '00 were 55.9 and 53.6 with Zorn at the helm. In '01 he ramps up to the highest completion % of his career thus far without Zorn coaching him. Jason Campbell moves on to Oakland and changes offenses once again. Now out of the west coast system his completion % drops back down to what we saw the year before Zorn with exactly the same number of TD's/INT's and sacks taken. Zorn does seem to have an effect on Campbell. His completion percentages under Zorn are the highest of his career, and top 62% both seasons. But, keep in mind that Zorn was the head coach and offensive play caller and had hired Chris Meidt as an assistant coach who worked mostly with the QB's.

with quarterback Jason Campbell over the past two years, and he helped devise the intricate play-calling system - which involved a color-coded system on Campbell's wrist - when Zorn lost his play-calling duties in October and was replaced by consultant Sherman Lewis

When I watch practice, I tend to see you working most closely with the quarterbacks. Can you run through those guys -- Jason Campbell, Todd Collins, Colt Brennan, and even Chase Daniel, who you helped to scout

Matt Hasselbeck, coming back from an injury year posts a 60% completion rate. It's the 3rd lowest of his career, but at this point he's 9 years into starting games in the NFL and his 2 lowest percentages were posted while Zorn was the QB coach. I'd attribute his drop in 2009 more to injury, and a non existent offensive line than to Coach Zorn leaving 1.5 seasons earlier. Hasselbeck has had a steller career as an NFL QB. I'm not trying to nullify what Hasselbeck has done; and Zorn has been a part of that. The question is : How big of a part?

Now we'll take a look at one final table of statistics. The following are the career statistics of QB's who were coached by Jim Zorn. It's not a complete list of all the QB's Zorn ever coached, but I have included the players whose names I think you will recognize. For reference I'll also add Matt Cassel's career stats to the table.

When I look at this table I see a line up of barely 60% passers, some who's TD/INT ratios are way too low, most that seem to eat too many sacks, a few with a too small sample size of attempts to really get a clear picture of, 2 sub 60% passers (not including Cassel), and only 1 that has made a real name for himself in the NFL. For sure, Hasselbeck has had a nice career. Hasselbeck's career was directly tied to Zorn from the first time he played as a starter for an NFL club. Zorn surely groomed Hasselbeck into what he has become as of today. But looking at the rest of the list, I have to wonder if Zorn is really the QB guru that so many Chiefs fans are giving him the credit to be; or is he merely a decent QB coach that joined up with the Seahawks at just the time to get paired with Matt Hasselbeck? Did Zorn make Hasselbeck, or did Hasselbeck make Zorn? No one else on that list besides Hasselbeck would lead me to believe that Zorn is as good of a QB coach as we Chiefs fans want him to be.

Another thing on that table jumps out and slaps me in the face as a Chiefs fan. Matt Cassel throws less interceptions and gets sacked less times than Charlie Batch. However, when you take away those statistics, it seems we are left with somewhat equal QB's. I'm having trouble believing that Zorn is the 'Mr. Miyagi' of NFL QB's. I'm also hoping that he is just that. How many of us Chiefs fans want to think of Charlie Batch's career as Matt Cassel's ceiling?

Food for thought: Maybe, just maybe, the real guru of QB's isn't Jim Zorn. It might be that we should be looking to the man that brought Matt Hasselbeck over from Green Bay in the first place. Mike Holmgren started his career in San Fransisco before moving on to Green Bay, and then Seattle. Mike Holmgren started out as a QB coach before moving on to offensive coordinator, and then to head coach. Holmgren not only worked with Hasselbeck, but also with Joe Montana, Steve Young, Steve Bono, Brett Favre, Ty Detmer, Mark Brunell, Jim McMahon, John Kitna, Trent Dilfer, Seneca Wallace, and Charlie Frye.

What do you think Chiefs fans?