Not Everybody Is Hoping That The NFL Lockout Ends Quickly

Share All sharing options for: Not Everybody Is Hoping That The NFL Lockout Ends Quickly

Have we missed something here?  Could it be that there are actually some folks out there who will gain something by having the NFL lockout drag on?  Apparently it's true.

Free Agents, particularly unrestricted FA's look to gain both financially and from extending careers that might otherwise have ended without the lockout.

Here is another faction of the player group that is hoping to see the lockout last just long enough for them to hit the jackpot.

Former Chief and Super Bowl XXXVII participant for the Raiders has been hearing talk that would seem to support this idea.  He was recently quoted here:

"I’ve talked to some coordinators and they all say the same thing — this (offseason) is a joke," said Rich Gannon, former NFL quarterback who is now an analyst for SIRIUS satellite radio. "When we don’t have these guys in May, June, and possibly July, how in the world are we going to get these young guys ready to play? This first year could be a wasted year for a lot of rookies."

Think about it.  With the announcement yesterday that the Rookie Symposium is cancelled, reality is beginning to set in for even the most stubborn of fans clinging to the "there is too much at stake so they have to get a deal done" mantra.  The symposium isn't much in the way of preperation for on field football, being more of a "this is how to live your life now that you are an NFL player" type meeting, but it is significant in that we are beginning to see events that were supposed to happen (sans the lockout), beginning to pass us by as road signs on the journey to a doomed season.
Conventional Wisdom is that an agreement must be reached in early July in order for the season to be played as close to "normal" as we can get.  Jim Irsay of the Colts said as much recently in an Indystar interview:

That "normal" now excludes the rookies to a degree because they have already missed some of the most important time that they could have spent learning the ins and outs of what is expected of them.  Indeed, our own Eric Berry confirms that in a recent AP post:

"It was really like a Chiefs football one-on-one class where you could get the basics of what's the procedure, how we get ready for practice, the basic schedule and what we need to do. I think it was a big help. It was a small thing but I think it really helped so I could get ready for training camp."

Granted, this is a relatively small thing, but how long before there are so many of these small things compressed into a shrinking window of opportunity that it becomes unmanageable and affects the season?  This is exactly what those FA's, and probably some RFA's and are praying for right now.
Imagine how this would affect Carson Palmer's ability to negotiate with the Bengals.  Carson was already on the "I wanna play somewhere else" bandwaggon prior to the lockout occuring.  Was that a stroke of genius considering what has happened?  Without a normal free agency period and a chance to find a replacement for him, the Bengals might just find themselves making a crazy deal to keep his services, albeit for just one more year.
What about guys like Marc Bulger, Matt Hasselbeck, Kevin Kolb, Donovan McNabb, and Vince Young?  The closer we get to basically throwing teams on the field, the more likely that these guys stock is on the rise.  Players who might otherwise have had difficulty finding a home at all, may now be the best option as a starter.  Talk about rags to riches.  You have to believe there will be a lot of one year deals made this year right before the shotgun blast signals the beginning of the season (if indeed there is a season).
More specifically for the Chiefs, how does this affect Brodie Croyle's future?  Do the Chiefs opt to keep him around and jettison Tyler Palko instead because of Brodie's game experience?  Maybe that was the plan anyway when Stanzi was drafted but many here conjectured that Brodie had played his last game as a Chief once the season ended.  A lockout shortened season could cause many post season predictions like these to vaporize.
What about guys like Shaun Smith?  How many teams will be looking for the services he could render?  I've already written about the fact that I think that Scott Pioli has a plan of action for a FA period that has been stood on it's head.  Let's hope my assumption is correct and Pioli can score us that player of need that we have been looking for.
How will this affect Chiefs like Mike Cox, Leonard Pope, Ryan O'Callaghan, Ron Edwards, Corey Mays and Travis Daniels?  It's going to be a free for all compressed in a closet.  Mistakes will be made and I am hopeful the Chiefs can take advantage. 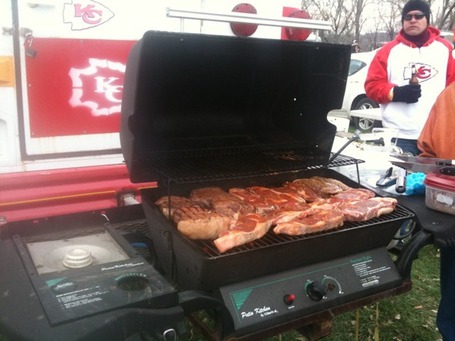 It's nice to know that this stupid lockout will potentially benefit somebody.  C'mon NFL, let's get some football on the grill.  The fans are as hungry as ever.