This Is What The NFL Lockout Is Doing To Us

Share All sharing options for: This Is What The NFL Lockout Is Doing To Us

We've noticed there hasn't been nearly as much buzz around the NFL this year thanks to the lockout. Without free agency, a major part of our offseason is gone so it makes sense that some folks would tune out as we await to determine whether there will be a 2011 season.

This has led to some silly stories among the NFL media. We'd include ourself in there as well -- remember the talking Chiefs parrot? The point is, there isn't much to talk about these days.

ESPN is clearly dying for some football content as well because they are now power ranking...helmets? 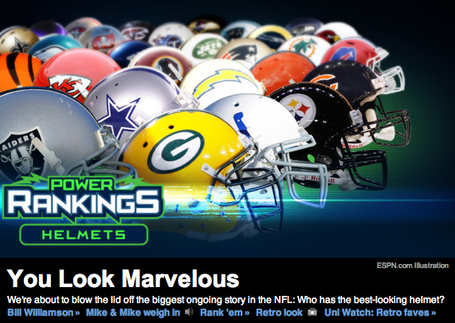