Good morning, Kansas City Chiefs fans! Today's news includes updates on Brady vs. the NFL, rumors of who the Chiefs are looking at for the draft, and the newest Chiefs play on Madden. Enjoy!

As she wrapped up a five-hour hearing, U.S. District Judge Susan Richard Nelson said she'd take "a couple of weeks" to rule on the players' request to return to work.

She then pleaded with the parties to resume negotiations in an effort to resolve the suit.

"It seems to me both sides are at risk, and now is a good time to come back to the table," Nelson said, noting her willingness to facilitate the resumption of talks toward a new collective-bargaining agreement.

But the two sides don't agree on much these days.

While it's difficult to interpret the questions and comments of any judge, Nelson's queries seemed to have most people believing that the players were winning this round. At one point, she called it "ironic that a wealthy, multi-employer group would choose to invoke" the Norris-LaGuardia Act in this fashion.

She also continually pushed Boies to explain how it is that the NFL could argue it's legal to lock out players if the union successfully decertified. On at least three occasions, Nelson went so far as to say she had "trouble" understanding the league's interpretation. She also referred to Doty's decisions in other NFL-related cases in a positive fashion at least six times.

At another point, Nelson, speaking in a polite-yet-assertive Minnesota drawl, pointed at the players and said to Boies, "These folks, they can decertify if they want to."

Rookie Judge in Control During Lockout Hearing from Yahoo! Sports

Virginia Tech running back Ryan Williams has been invited to Radio City Music Hall to attend the NFL draft and has accepted the invitation.

Williams is one of the top players at his position.

He conducted a private workout for the New England Patriots last week, according to a source close to the Hokies' program.

Williams has upcoming visits with the Washington Redskins and the Kansas City Chiefs and conducted a private workout for the Baltimore Ravens.

Eastern Washington junior running back Taiwan Jones has met with the Philadelphia Eagles and has meetings with the Arizona Cardinals, Miami Dolphins and the Kansas City Chiefs, according to a league source with knowledge of the situation...

...Jones has rare athleticism as one of the faster players in the draft and has emerged as an potential draft target between the second round and the fourth round. He's expected to run the 40-yard dash in the 4.35 range.

RB Taiwan Jones in Demand, to Visit Dolphins, Has Met With Eagles from Yahoo! Sports

The three men on stage are all warriors, men who have stared adversity in the eye and then found a way to triumph over it.

Two men, Kurt Coleman and Donald Washington, are safeties in the NFL, and the third man, Ron Coleman, was a long-time football and basketball coach.

But it's not sports nor the thrill of victory that brought them out to the auditorium of Stebbins High School. Instead, they came to discuss with dozens of audience members what they do when the going gets tough off the field, and they can't rely on their physical strength or coaching skills for victory.

NFL Stars Speak at Stebbins from The Dayton Daily News

The 2011 Texas Relays will welcome Olympians Tyson Gay and Jeremy Wariner. Wariner and Gay will compete on a 4x400 relay team.

While Gay and Wariner will command plenty of attention, Kansas City Chiefs running back Jamaal Charles, Tennessee Titans running back Chris Johnson, Philadelphia Eagles wide receiver Desean Jackson and Minnesota Vikings running back Adrian Peterson may join the two stars at this year's relays according to a Yahoo sports release.

Track Team Does Texas Two-Step from The Kansas State Collegian

Jake K. from Bolivar, Mo., wants to know what top prospects from the SEC the Chiefs could look at.

BW: It's a great question, Jake, because Kansas City and general manager Scott Pioli have a history of taking players from the SEC early in the draft. Pioli figures if players can produce at the highest collegiate level, they'll be equipped to compete in the NFL.

UNLV offensive tackle Matt Murphy is visiting the Indianapolis Colts tonight, according to a source close to the program...

...His Pro Day workout was attended by the San Diego Chargers, New York Giants and the Kansas City Chiefs.

Steps taken by Solder after college include going to the CU pro day, where players show agents how well they can do.

He hired an agent, Mark Humenik of Athletes First, and trained for combine. Nate was invited to visit with several pro teams including the Dallas Cowboys, Kansas City Chiefs and Baltimore Colts.

He also visited with the Denver Broncos and the New England Patriots. Other teams could still call him, Peri said.

EA Sports is continuing the gradual reveal of 25 new plays for Madden NFL 12 and here are the latest five. Brief descriptions accompany the play art for each... 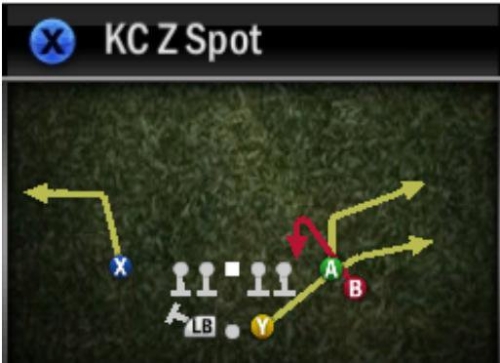 ...Chiefs- Gun-Split Close- KC Z SpotThis play is a very common play from a variety of formations throughout Madden NFL 12. In this particular case, however, the Chiefs like to use the Z Spot concept from the Gun Split Close formation to utilize the speed of HB Jamaal Charles coming out of the backfield. This play was used in a week 10 game at Denver.

Second Set of New Plays in Madden 12 from Pastapadre