As Scott Pioli and Company continue to build the Kansas City Chiefs into a champion I think it's important to step back and look at the big picture in what they are creating.

After taking Justin Houston and Allen Bailey in day two of the draft you kind of get the feeling that there is just that one piece that is missing on defense.

Sure, we could use some more secondary depth at corner and safety but who couldn't? We have another few rounds left anyways. But there is a very strong core group of players on this defense right now and it is very close to being considered, in my opinion, elite. I don't want to put too much stock into players that haven't even stepped on the field yet but damn....we have some talent right now.

I think that our defense would have gotten better had we not added any players to it for the simple fact that we were very young. Glenn Dorsey had a good year as he progressed into a solid 3/4 Defensive End and he is only going to get better. Tyson Jackson in my opinion is going to continue to get better and he is going to have a great season next year. He had some dominant performances that seemed to have gone unnoticed by the majority of Chiefs fans. And for the record, I couldn't care less how good BJ Ragi is playing for the Packers. He is in Green Bay and Tyson Jackson is in Kansas City. The only thing I want to compare is Tyson Jackson from one game to the next, and from one year to the next. 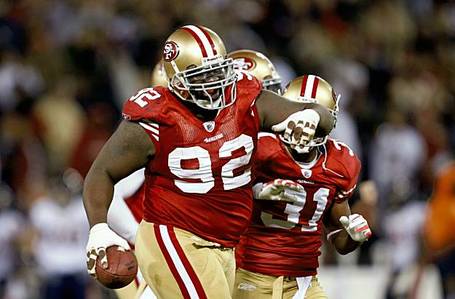 This man is going to be a Kansas City Chief. I know what some people may be thinking and I will debunk those myths right here and now.

Oh contraire mon frere. In 2007 with the New England Patriots Pioli and Hoodie went out and signed Free Agent Linebacker Adalius Thomas to a 5-year $35 Million dollar contract with $20 million guaranteed. He was considered one of the, if not thee top free agent on the market at that time. When they feel as if they are just one key player away from a dominant side of the ball, they will make the move to get that player. Don't forget that we did try and make a move for Darren Sproles, Anquan Boldin, and Shaun Rogers. With Aubrayo Franklin playing Nose Tackle for the Kansas City Chiefs, we are the favorite in the division and a sleeper team in the AFC. 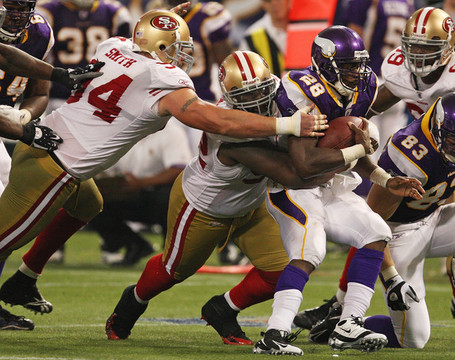 Aubrayo Franklin will want too much money.

Vince Wilfork signed a deal for 5 years worth $40 million dollars and $25 million guaranteed. He is 29 years old and is considered a better player than Franklin. Franklin is 31 years old and made $7.1 million last season as a franchised player. Is a 4-year deal for $26 million dollars out of the question? We have one of the lowest payrolls in the league and still managed to have the biggest turnaround in team history with a 10-6 record last year and an AFC West championship. We were not one player away when we were wanting Karlos Dansby or Julius Peppers. We are now one player away on defense and history has shown that we will make a move when the time is right and the player will make an impact. Signing Franklin fits both of the criteria and leaves plenty of money to extend Hali and Flowers contracts. The extensions that JC and DJ signed last year were very telling in that neither of them broke the bank in order to stay here. They signed very reasonable contracts which tells me one very important thing, they want to be here. 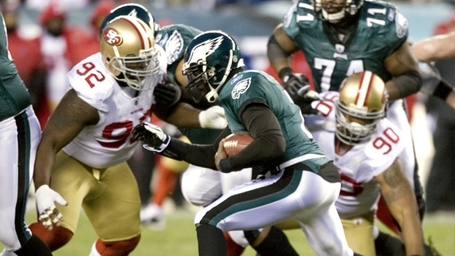 Why not just trade up and take Powe?

I don't consider myself much of a football expert but even I know the importance that a solid NT has on a 3/4 defense. So it would be a little insulting to Pioli for me to think he didn't know what he was doing when he traded away from getting Phil Taylor (So we got Baldwin and Houston instead), or passed on Kenrick Ellis (for a solid DE that was rated as a 2nd round pick). It seems as if we were solidifying everything except the NT position. If Pioli knows how important the position is to the defense then why is he blatantly ignoring filling that need? One of two reasons, He doesn't like the players that are available and has another plan, or he likes the players that are available and goes in another direction because he has another plan. See where this is going? I still think it's very possible that we draft a NT but that doesn't change anything in my mind in regards to going after Aubrayo Franklin. We'll need depth and a guy to groom for when Aubrayo gets older and it's the new guys turn to take over. But getting a dominant NT is key and Pioli knows that. He has this set up perfectly to take Franklin and push this team to a whole new level. 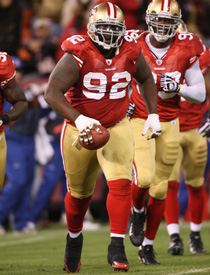 The Washington Redskins are going to offer him all of the money he could handle.

Despite the fact that Washington spent the #41 pick on Jarvis Jenkins I think this is a pretty easy one to handle. Aubrayo is going to want to get paid and he'll want to be on a winning team. We can offer him a similar contract in a division that doesn't have the Giants, Eagles, and Cowboys. He is the missing piece to a strong defense to where he could step in and see Pro-Bowlers all-around him and be the defacto "missing piece" that would no doubt make him a beloved fan favorite. There isn't another team out there that could offer the same amount of money and put the pieces around him that the Chiefs can next year. 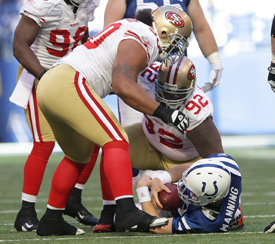 Who wants to see this from Franklin in a Chiefs Jersey? We need to finally take this guy down. We have proven that we can run the ball. Once we prove that we can stop other teams from running the ball we will be a force to be reckoned with for every team in the NFL. Maybe it's the Kool-Aid flowing right now but before I see an AP explosion if we don't draft Powe, or anyone else that plays the NT position for that matter. We need to understand that there will be a dominant NT available in FA (whenever that happens) and Pioli has shown in the past that when they need that one player to piece the puzzle together, they go and get him.

Aubrayo Franklin will be a Chief....and he will be revered for what he will do for this defense.