The 2011 Arrowhead Pride Mock Draft continues with OnlyKCFanNVA choosing for the Philadelphia Eagles at No. 22...

The league's longest tendered coach Andy Reid enters his 13th season as the Philadelphia Eagles head coach with what might be his best team to date. They have already made two great hires this off-season, one on each side of the ball. Jim Washburn was brought in to coach the defensive line. Washburn has an impressive resume having lead the Tennessee Titans to the 7th most sacks in the league since 1999. He has an uncanny ability to turn lesser known players like Kyle Vanden Basch and Jason Babin (remember him Chiefs' fans?) into serviceable/pro bowl caliber contributors.

He will bring his wide-nine technique to Philadelphia but will he get a new toy to play with via the 23rd pick of the 2011 NFL Draft?

Not if new offensive line coach Howard Mudd has anything to say about it. The Philadelphia Eagles had major concerns along the o-line at the end of the 2010 season. Even with video-game Vick doing what only he can to escape pressure, the Ealges still managed to surrender 50 sacks, the highest total of the Andy Reid era. Winston Justice, the Eagles starting right tackle had to be replaced in the season ending playoff loss to Green Bay. The Eagles need to find a way to better protect their franchise player and you can't do that without more pass-blocking tackles. Jason Peters is great on the left side but the right side is all the more critical when your QB is a lefty.

I believe Washburn is asked to turn last years number one pick into a solid contributor. Brandon Graham could become a huge piece to the puzzle in Philly if he continues to rehab his injury and comes back motivated and ready to learn from Washburn. The new D-line coach also gets to work with Trent Cole and Juqua Parker, not a bad combination in the wide-nine. The defensive tackles are solid and deep with Bunkley, Patterson and Dixon all in the rotation and making plays.

With an improved pass rush the Eagles secondary will perform much better. Also, if we have a free agency period look for the Eagles to make a move for Raiders CB Nnamdi Asomugha or New York Jets CB Antonio Cromartie. Some Eagles fans are wanting to draft Jimmy Smith CB, Colorado and I didn't eliminate him based on his so-called character issues. It was only after finding this list that I was able to feel 100% confident in my pick. 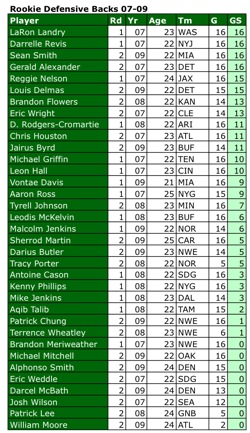 As you can see from the table, less than half of the defensive backs taken in the first or second round of the NFL draft start even the majority of their team's games.

Eagles GM Howie Roseman when discussing the possibility of drafting a tackle said, "We like to throw the ball in Philadelphia, and for that they've got to have good feet, good athletic ability, be able to move."

I don't think you could have described Colorado OT Nate Solder any better. Nate stands at 6-foot-8 and he was measured with an 81-inch wingspan. Solder also fits the Andy Reid mold. Much like star Jason Peters, Nate Solder is a converted blocking tight end.

Some might argue that Nate Solder wont contribute right away for the Eagles and they may be correct. However, I don't think he will be asked to contribute day one. This team rarely drafts players to fill an immediate need. For example, in 2007 (Kolb), 2008 (DeSean Jackson) and 2009 (Jeremy Maclin) players were drafted with long-term goals in mind. Even last year, the Eagles moved up in the draft to select Brandon Graham when most thought the biggest needs were in the secondary. They simply placed a higher value on finding a pass rusher to play opposite Trent Cole in the years to come and got their help in the secondary in round two (Nate Allen).

Nate Solder will provide stability to an Eagles offensive line that should be much improved in 2011.