The 2011 Arrowhead Pride NFL Mock Draft rolls on with craig in calgary picking for the Denver Broncos at No. 2...

Picture it will you.

It's the Broncos war room and the 3 most powerful men in the Bronco's organization are huddled around the table; Pat Bowlen, John Elway and Tim Tebow now realize that they are on the clock. Blaine Gabbert has just been reached for taken by the Panthers and now they have a big decision to make. Do they address the 32nd ranked defense, or do they give another toy for Tebow to play with? Do they build from the trenches, or are they looking for speed on the outside?

Let's listen in on their conversation shall we? 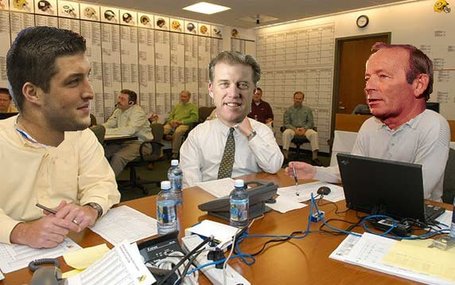 Pat: Where the hell is Brian Xanders?
John: I dunno, I assumed you invited him?
Tim: Umm, I actually fired him. God Bless.
Pat: Ahh good thinking. He wasn't actually a real GM anyways.
John: So what you guys thinking?
Pat: I think we need to take one of those big DT's, Dareus or Fairley. We can't stop the run and all the AFC West does is run the ball, so I'd like to get a stout run stopper in the middle.
Tim: I disagree. AJ Green is a monster and can you imagine how unstoppable our passing offense would be with Green, Thomas, and Lloyd? God Bless.
John: I agree with Tim, the Broncos will be unstoppable.
Pat: Ummmmmmm. Seriously? What about our defense? We were so shitty on defense last year, Matt Freaking Cassel through for over 400 yards and 4 TDs
Tim and John: Ah, good point.
Pat: I'm looking at that Clemson DE, Da'Quan Bowers. We had a league low 23 sacks last year and none of us are sure that Dumerville will be able to recreate his 2009 season from a DE position.
John: I like your thinking. Bowers would be great cornerstone to Foxies new 4-3.
Tim: God Bless. Buy Hanes. John 3:16. GO GATORS!
Pat: Should we vote on it?
John: Bowers
Pat: Bowers
Tim: Mike Pouncey
Pat: That solves it 2-1. Who wants to make the phonecall?
Tim: I do

(Tim takes out his phone)

Da'Quan: Oh Christ (rolls eyes): Hello?
Tim: Hi Da'Quan, are you ready to be a Denver Bronco?
Da'Quan: Do I have a choice?
Tim: No
Da'Quan: Ok, I guess I'll see you in camp
Tim: God Bless

Ladies and Gentlemen, the 2nd pick in the Arrowhead Pride Community Mock draft is Da'Quan Bowers!