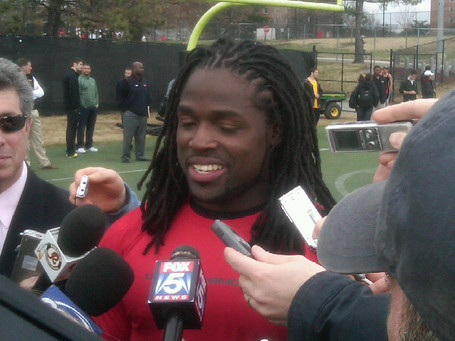 The Kansas City Chiefs were at the Maryland pro day on Wednesday, according to Mike Duffy of the Baltimore Ravens official website. We have no clue who the Chiefs were looking at but the biggest name at the pro day is WR Torrey Smith who could slip into the first round.

Smith is a 6'0" and 204 pound receiver out of Maryland who put up over 1,000 yards and 12 touchdowns last year. He has the school record for career all-purpose yardage.

Here's what Mocking The Draft says about him: "It seems like Smith makes a lot of catches with his arms and not his fingertips. While he's done a better job on his routes in 2010, he doesn't run an especially complex route tree. Smith may never be a true No. 1 receiver on an NFL team. What he will be is a good No. 2 and a standout special teams performer."

Another possible player is Da'Rel Scott who is a 5'11" and 211 pound running back that's expected to go in the mid-to-late rounds.