Jamaal Charles On Receiving FedEx Ground Player Of The Year

Share All sharing options for: Jamaal Charles On Receiving FedEx Ground Player Of The Year

Kansas City Chiefs RB Jamaal Charles didn't win the Super Bowl or even a playoff game -- but he did win something. At a press conference Wednesday afternoon, Jamaal Charles was announced as the FedEx Ground Player of the Year.

"I'd like to thank God for the talent he gave me," Charles said upon receiving the award. "I also want to recognize Arian Foster. He's a great person on and off the field. I'd like to thank the fans who voted for me. I'd also like to thank FedEx. Without my teammates and my offensive line I wouldn't be able to do this. "

Charles was one of three nominees including Houston Texans RB Arian Foster and Atlanta Falcons RB Michael Turner. On stage for the press conference was Foster, Charles and Bart Starr, who was accepting the FedEx Air Player of the Year award for Green Bay Packers QB Aaron Rodgers.

Phil Simms, who was the presenter at the press conference, said he attended Chiefs practice the Friday before the Baltimore Ravens playoff game and that the TV lies -- Charles is actually faster in person.

Charles says he's already started his preparation for next year and understands the work that's involved. I'll have more on what he had to say shortly.

Here we are at Super Bowl week, the epicenter of the media and football world, and Charles is front and center. This is pretty cool.

Here's a shot of the hardware Charles is going home with: 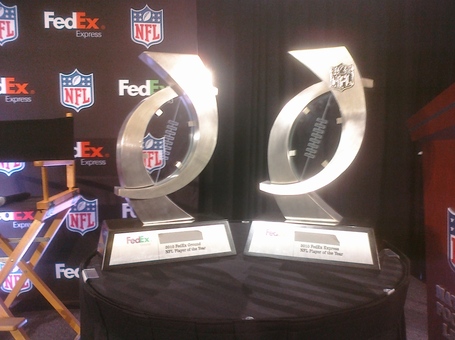