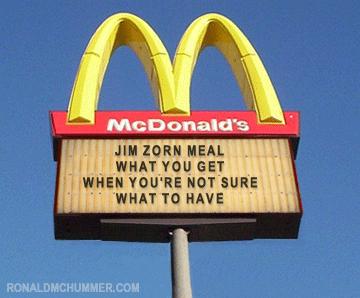 That's the way the conversation goes when I tell friends and Chiefs fans that don't have the NFL sickness that we APer's have (staying tuned in to NFL football 24/7/365), about the Chiefs new QB coach. It is usually followed by silence while the person I am telling reaches back in the memory banks for some tidbit that will help them remember the guy and then justify this move by Todd Haley.

Jim Zorn is no stranger to Arrowhead. For 8 years of his career in Seattle, his Seahawks were in the same AFC West Divison as the KC Chiefs. It looks like he played in seven games in Arrowhead during those 8 years (the teams did not meet in 1982 in the strike shortened year, and his last year of '84 he did not play--Dave Krieg had taken the starters job during the '83 season). From what I can find his record in those six starts was 3-3. It appears that you didn't know what to expect from him back then either.

Here's a little video of one of those wins to make you wince.

On that day, Zorn threw the ball 23 times, completing 14 for 142 yards in an ugly win. He had no TDs and no INTs. He was in his third year in the league having started with the expansion team Seahawks in '76, and had few if any, reliable targets to throw to on a regular basis. The Chiefs would fininsh 2-10 that season and the Seahawks 6-6.

Yes indeed my friends, those were dark days for the Chiefs (similar in nature to the Herm years **SHIVER**). Did you notice how few fans were in the stands in a one year old stadium on Arrowhead drive? Losing 10 games in one season will cause that I guess. But, I digress.

Didn't Zorn's numbers and situation sound similar to Matt Cassel's back in '09? Wouldn't you say that Zorn, having entered the NFL on an expansion team that struggled during his tenure there, would understand exactly what Matt Cassel's experiences with the Chiefs have been like so far? I'm sure that these two will have similar stories to share that will bond them in a commonality that few of us could possibly share. An NFL QB on a struggling team wanting desperately to win.

Actually, Cassel has moved into playoff football a bit quicker than Zorn, getting a start in a playoff game in his sixth season. Zorn didn't see playoff action until 1983 (and never got the start), eight seasons after his career began. Zorn's struggles as a player are well documented and being part of an expansion team made the hill a bit higher to climb.

His coaching exploits are just as well documented and mirror his playing years in terms of struggle. In this, I would think that Zorn could find a common bond with Bill Muir. Both men have labored for years in a sport that they love, both have coached in a Super Bowl contest, and with the exception of Muir's win vs. Zorn's loss, success has been elusive for them both. 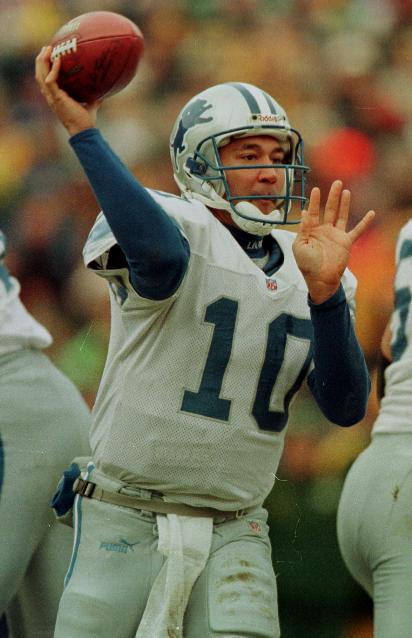 Batch, Hasselbeck and Flacco. These are the protege's of Jim Zorn. Batch was hampered by the fact of playing in Detroit as a rookie. Somethings just can't be overcome. His numbers during the Zorn years are really nothing to wake up the cows for. In some ways, he got worse over those three years. He never completed 60% of his passes, never threw for more than 13 TDs and saw his interceptions increase each year from 6 in '98, to 7 in '99 to 15 in '00. His rating dropped from 83.5 his rookie season to 67.3 in 2000. That doesn't sound like much of a success story, but you have to remember that we are talking about the Lions. That is a very difficult place to succeed. 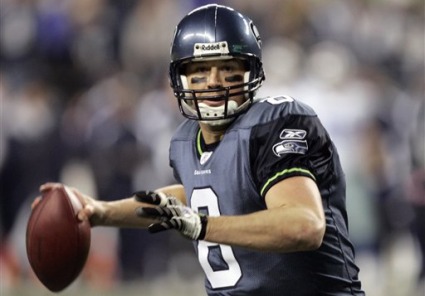 Hasselbeck is the deepest pool of information concerning Zorn's coaching prowess. These were the Holmgren years in Seattle and Hasselbeck was originally a rookie in Green Bay before Mike left the land of Favre. During Hasselbeck's seven seasons of "Zorn-Star" status in Seattle, the 'Hawks would play in 9 playoff games, win the conference once and participate in and lose a Super Bowl. During that time, Hasselbeck was about as consistent as you could want a QB to be. He averaged 3200 yds passing, 20 TDS and 12 INTS, and a 85.2 passer rating. Not bad. Would you be happy with that from Matt Cassel? I think many fans certainly would be. 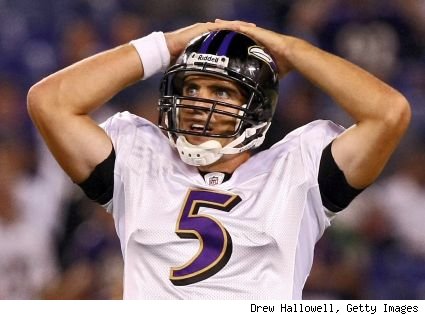 Then in his most recent QB coaching gig, he presides over Joe Flacco posting...what? If you look at his stats, his 2010 season was almost a carbon copy of his 2009 season. He threw the ball 10 less times (or less than one time per game) in '10, for a total of 8 more yards, 4 more TDs and 2 less interceptions. He also was sacked 4 more times than in '09 but gave up nearly 80 more yards to the defense on those sacks. I would argue that Ravens fans who are complaining that Joe is holding the ball longer are correct. Is that good or bad? Only time will tell. Will this influence make Cassel hold the ball even longer than he currently does?

His rating went from 88.9 to 93.6, but in the overall scheme, going from 9 wins to 12 wins is what made Flacco look greatly improved. Statistically speaking, he was virtually the same QB in '10 as he was in '09. The difference was that he liked Zorn. Whether or not that had an influence on winning is very hard to measure. I know that there are many in Chiefs fandom that absolutely swear by the QB coach position as part of a winning philosophy in the NFL. It is a job of hand holding, educating, and being a sounding board that gives that QB somewhere to go with pent up frustrations that come from a host of any given Sundays.

Whether or not it made Flacco better remains to be seen. One thing is for certain, Zorn's influence on Flacco was welcomed by the Quarterback. His outbursts about Zorn's firing certainly show that. At least we know that Zorn connects with his QB protege's. In the bigger scheme of things, isn't that exactly what we want? Confidence building 101. Could Matt Cassel become the next "Zorn-Star"? 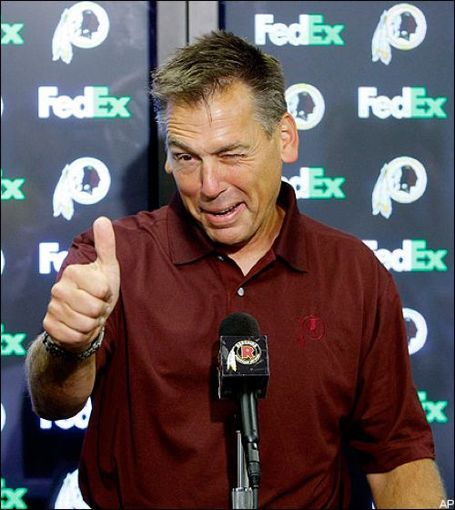 Examples of backhanded compliments include:

"That dress is lovely; it does wonders for your figure."

"You're smarter than you look."

"You drive very well, for a woman."

"Your son is more handsome than I would have expected."

"You are attractive, for your age."

In each instance, there is an initial compliment: praising a piece of clothing, a person's intellect, a person's driving ability, or a person's looks. However, each instance also includes an implied criticism: the person is rotund and needs camouflage to hide her weight; the person appears unintelligent on the surface; women don't drive well, and therefore any skill at driving is noteworthy; the son's parents are unattractive.

Ok, so why would I say this about Zorn? Zorn is a south paw it is true, but that is only part of why I chose this term (though i do love the irony). No, this has more to do with Todd Haley than anything else. See if you think there is anything here.

Jim Zorn became the Redskins HC in 2008 almost by default. Joe Gibbs had retired (again) in January after Zorn had been hired to be the new OC. Snyder, who is in the running for the worst NFL owner (currently tied with Al Davis), makes another one of his knee jerk decisions and promotes Zorn to HC. Zorn had been around the NFL and certainly had some credentials but I don't think he was quite ready for the job. I know damn well he wasn't ready for Daniel Snyder.

I think that most fans would agree that Zorn kind of got the short end of the stick in D.C. and I think that makes him a bit of an underdog. Remember, the Chiefs are the perinnel underdog in the NFL. Why not bring on another one?

All reports about Zorn are that he is a man of faith, an adreline junky and the following shows that he doesn't give a flip about what the media or his detractors think about what he does.

Kind of remind you of a favorite KC coaches attitude about going for fourth down conversions and unconventional on-sides kicks? This guy is as off the rails as Haley is about thinking out of the box. These two absolutely must agree about risk taking. Zorn's friends talked about his mountain biking prowess.

"Jim will bike off a rock ledge with a 3-foot drop," says Jim Trezise, Zorn’s close friend and former kayaking partner. "Normal people would just walk their bikes around something like that, but Jim goes airborne. He likes living on the edge."

The review, above, of Zorn's experience shows that he is qualified, but he is more of a West Coast offense type than an EP purist (albeit, he did add elements to the '08 'Skins from a West Coast perspective that were very interesting considering that their offense was 4th in the league in rushing behind Clinton Portis et al that season). He has no connections whatever to the Parcells tree which nearly every other coach on staff with any experience does have and he is the first rendering of a QB coach in KC since Haley took over two years ago. If Haley thought the QB coach was so important, why wait until Matt's third season to get one in here to help?

I think Haley has a lot in common with Zorn. Both are risk takers, outside the box thinkers, and adrenaline nuts. Buddies under ths skin as it were. If Haley felt compelled to hire a QB coach becaause of his 'forced' choice of a backup at OC, this is the perfect left handed compliment to the powers that be (Pioli/Hunt/Media/Fans). Could this be Haley's way of saying, "OK fine, you wanted a QB coach and I got you one. Guess what? He's just like me."?

Who knows? I don't subscribe to this view, but it sure is an interesting question. Haley has already shown the propensity to do things that others would be afraid or embarassed to try. Remember the port-a-potty passing drill? That didn't do much for our public profile in NFL circles, but Haley didn't care. Zorn is known for being a bit quirky like this as well. He has players do unusual things with the intended consequence of somehow improving their performance. Maybe it will work and maybe it won't, but the desire to be a fly on the wall in meeting rooms where Haley and Zorn will be cloistered just went up a notch.

As for me, I am happy to have Zorn on staff--until he gives me a reason not to be. I like the idea of Matt getting some intensive 1 on 1 instruction and an ear to confide in. Will it make a difference? It didn't seem to make a statistical difference for Flacco, but he did win 3 more games. If Zorn can coax three more wins out of Cassel, I don't care what his stats look like. Trent Dilfers ring still says Super Bowl champs after all these years.

This is what I like about Pioli and Haley. No matter what you think you know about these guys, they just keep doing things to keep the interest at a high level. Let's hope that the CBA gets worked out and we have a 2011 season. It would severly suck to miss a season during this critical time for the chiefs.

Welcome to the party Jim Zorn. I hope you and the Chiefs gain from the association.