2011 Super Bowl: Thanks For Coming With Me, Snow

Share All sharing options for: 2011 Super Bowl: Thanks For Coming With Me, Snow

I said to you all yesterday that I was leaving Kansas City last night for Dallas to cover the 2011 Super Bowl between the Pittsburgh Steelers and Green Bay Packers. Let's just say that making that trip is easier said than done.

Let's start at the beginning. I was originally scheduled to leave Kansas City on Tuesday morning but I saw this snowstorm coming so I called an audible and changed my flight to Monday afternoon.

With the snowstorm coming to Kansas City, Monday afternoon turned to Monday evening and I sat in Kansas City's airport wondering if I would be making it down to Dallas. If I didn't make it last night, the storm coming would have supposedly made it near impossible to leave Kansas City on Tuesday.

So I eventually end up leaving Kansas City around 8:00 p.m. and make it to Dallas late -- but I still made it. I was glad to be away from the snow and into a little warmer weather.

And of course this is the scene outside my hotel this morning.... 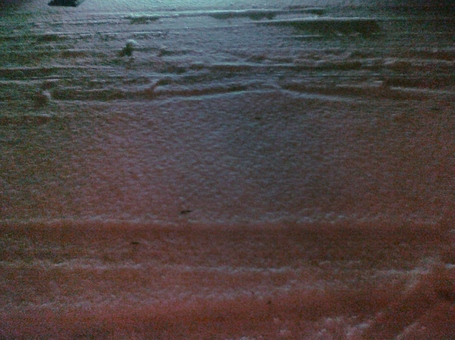 The freakin' snow followed me from Kansas City to Dallas. Our hotel clerk tells us the last time it snowed was about a year ago.

Next thing you're going to tell me, I came all the way down here and the Chiefs aren't even playing. Sheesh.