Ramblings Of An Idiot: Playoff Pictures

Share All sharing options for: Ramblings Of An Idiot: Playoff Pictures

Too bad, I'm going to talk about playoffs. If you're a football fan (and not JUST a Chiefs fan) then you're probably doing what I'm doing as we move into December. You're looking ahead to the playoff picture and wondering who's going to make the tournament. So let me clear this up for you the best that I can with 4 games to play.

AFC Out: Dolphins, Browns, Colts, Jaguars (no one is earning a wild card spot at 8-8)

The Bills, Chiefs, and Chargers have almost no prayer of getting to the playoffs without winning their respective divisions, and the Bills would have to win the remaining four games, while the Patriots lose the next four games AND have no one else in the division win two of the remaining four for that to happen. The Chargers and the Chiefs are slightly better off, but just slightly. They are each behind by four games, but Denver has the better conference record and the better division record, so a tie won't help. Both these teams need to have a one game lead in the division, or an equal record without losing any more division OR conference games.... while Denver and Oakland not only lose the rest of their division games, but also at least one conference game outside the division.The Bengals are racing for a wildcard spot barring a miracle where both the Steelers and Ravens lose three of the next four and the Bengals win three of four.

The only reason I'm not ruling out the Cards and Seahawks is that they have at least a snowballs chance in hell to take the final wild card spot. Either of them would have to go on a four game win streak WHILE four other teams in the conference lose at least 3 of their remaining four games for that to happen.

For all the insane people looking at the draft four weeks before the playoffs have even started, that means the Dolphins, Browns, Colts, Jags, Rams, Vikings, Buccaneers, Panthers, Bills, Bengals, Redskins, Eagles, Cardinals, Chargers and Seahawks are your main competition for higher draft spots. Among those teams I seriously doubt the Rams, Vikings, Buccaneers, Panthers, Bills, Bengals, Jaguars or Chargers are going to be spending a first round pick on a QB.

That leaves the Dolphins, Browns, Colts, Redskins, Cardinals, Seahawks, and Eagles as teams that could draft in front of the Chiefs looking for a first round quarterback. (Sorry Michael Vick fans. I've never believed in his ability to throw from the pocket or remain healthy while taking off running all the time... and I still don't. Vick may be exciting to watch, but he's a college QB in an NFL uniform). We can't forget about Denver. At the moment, they look to draft after the Chiefs, but I believe they will most certainly be in the QB business come draft time. John Elway isn't sold on Tim Tebow at a pocket passer any more than half the NFL fans of the world are. Including the Chiefs, that makes nine teams in the market for a new passer. NINE!

Concentrating on the Chiefs' playoffs hopes is a little disheartening, but let's do it anyway. The Chiefs (or the Chargers for that matter) need to win at least three of their four remaining games while the Broncos and Raiders lose three of four in order to win the division outright. Or the Chiefs could win all four of their remaining games while Denver and Oakland finish out two and two. If we want to explore tie breakers then we have to start talking about conference and division records, as well as head to head match-ups. Without going into too much detail I'll just say that the Chiefs would need to have a one game lead over the Broncos, but if the Broncos drop and the Raiders are tied for the division lead with the Chiefs, than the Chiefs could win the tiebreaker as long as they sweep the Raiders in the division.

It's not impossible for Haley's team to squeak into the tournament this season, but it would be a 2006-07 Herm Edwards-esque playoff berth where several different games' results hang in the balance all having to happen in just the right way in the last two weeks of the season in the Chiefs favor. Call me a homer, but I still hold out hope! Considering there are eight teams looking for a quarterback if the Chiefs don't finish worse than the Broncos, and nine teams if they do, I don't really see a point in hoping to lose games for a better draft position. There are going to be a bunch of teams trying to make draft day trades to get in position for whatever quarterback they covet. At this point, it's down to who's willing to give up the most to improve their draft position. That's on Clark Hunt and Scott Pioli to decide, the team's final weeks of the regular season have little to do with it. We may as well just go ahead and win out the season, division, and Super Bowl for all the difference it makes in the draft. 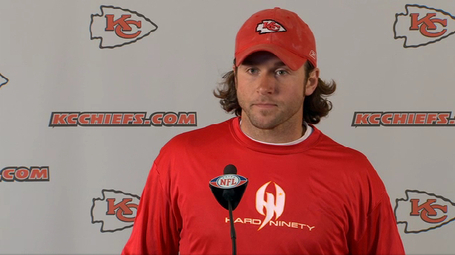 On a completely unrelated note: Does anyone else think immediately of Keanu Reeves' quarterback role in "The Replacements" any time they say or think "Go Palko!" (Falco in the movie) or is it just me?