Chiefs Beat Bears And 34 Things To Remember About The Game

Share All sharing options for: Chiefs Beat Bears And 34 Things To Remember About The Game

Finally. The Kansas City Chiefs have ended their four-game winning losing streak with an ugly 10-3 victory over the Chicago Bears. The Chiefs offense only put up 10 points, their first touchdown in 12 quarters thanks to a Tyler Palko hail mary to Dexter McCluster, and that was enough to seal it.

The story lines from this game are the short-lived Kyle Orton era, a Tyler Palko hail mary and another impressive performance from the Chiefs defense holding the Bears to three points.

I took notes throughout the game, sort of a running diary, so check out 34 things to remember about the Chiefs fifth victory of the season.

Your starting quarterback is....Tyler Palko. After wondering throughout the week who would start, it is indeed Palko. Chiefs head coach Todd Haley was coy during the week when asked specifically who will start on Sunday. He always said "Tyler's our starter" and that's the case against the Bears.

Here's the first look at the Chiefs backup quarterback, Kyle Orton, in a Chiefs uniform (via @JoshLooney): 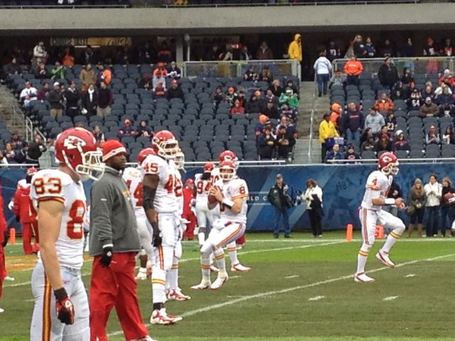 The faith in Tyler Palko. It's 3rd and 10 on the Chiefs first drive, and they throw a quick out to Steve Breaston That shows you the type of faith they have in Palko -- 3rd and long and they throw a pass at the line of scrimmage. Later in the game you could see part of their strategy on third and long was to play it safe.

First punt to Devin Hester: Hester called for the fair catch and let it drop. There was one Chief in the area with a Bears special teamer trying to block him so Hester had some room if he caught the ball.

First problem for the Chiefs comes early. The Chiefs defense held strong on the Bears first offensive drive so Chicago punted the ball. It was a horrible punt and the ball bounced near two Chiefs players -- Sabby Piscitelli and Jalil Brown -- and apparently hit one of them. If the ball is touched by a member of the receiving team, the opposition can pick it up, which the Bears did. It looked like Haley was going to challenge the call -- he threw the flag -- but after consultation with the refs he decided not to. It really should be an easy decision -- Brown and/or Piscitelli should know whether the ball hit them. Plus, the Chiefs coaching staff has the ability to watch the replays in the coaching booth so they apparently decided this was not a challenge KC would win.

Second punt to Devin Hester: Ball lands inside the 10-yard line and Hester doesn't touch it. The Chiefs have the punt well covered.

Derrick Johnson goes beastmode on Matt Forte. Forte took a handoff inside the Bears own 10-yard line and hit a hole along the left side of the line but DJ side-stepped a blocker and drilled Forte right in the legs bringing him down. Unfortunately for Chicago, Forte went down with an injury and he looked to be in pain.

Mike Pereira, former NFL officiating czar, chimes in on the holding call: "The hold started at the 1yd line so penalty is enforced from there, no safety, great call."

Bears know how it feels to be the Chiefs now. The Bears are now missing their starting quarterback and star running back after Matt Forte was ruled out for the game. Hmm...doesn't this sound familiar?

The Kyle Orton era starts at the start of the second quarter. And now he's hurt. Orton's first play was a flea-flicker and his hand/arm was drilled as he through it. He got up, signaled to the sideline for Palko and walked off the field. Are you kidding me?

Fourth punt to Devin Hester: And that's why you don't want to kick to him. Hester was finally able to field a punt and he returned it 44 yards to midfield before Dustin Colquitt was able to trip him up.

Wacky fourth down works out in the Chiefs favor. The Bears offense had a fourth and one with about 10 minutes left in the second quarter and, for some reason, decided to go for it. With the play clock winding down, the Bears offense rushed to the line as the Chiefs defense tried to substitute. KC called a time out because they couldn't get their guys in position and then the Bears followed it up with a timeout. The Bears offense came back out, lined up and snapped the ball to find Marion Barber WIDE open -- a blown assignment by the Chiefs. Luckily, Barber wasn't on the line of scrimmage when the ball was snapped, which was a penalty. The Bears then decided to kick the field goal, which they made, making it 3-0.

Fifth punt to Devin Hester: Out of bounds and no return.

Justin Houston gets his first career sack. He's been playing much better lately and he picked up his first sack against the Bears when he was able to get to Caleb Hanie. The play was huge because it came on third down and pushed the Bears out of field goal range. Essentially, a three-point sack.

Down goes Kendrick Lewis. A knee injury. He returned in the second half.

The first touchdown of the Tyler Palko era! Wow! The Chiefs had the ball at the 39-yard line with two seconds left and decided to go with a hail mary. Palko took the snap, stepped up in the pocket and flinged it to the end zone. Brian Urlacher and Chris Conte both jumped up to grab the ball and, as Urlacher was trying to catch the pass, Conte knocked it forward...right into the hands of Dexter McCluster. The catch was ruled a touchdown and the Chiefs have their first touchdown in the Tyler Palko era. It was a 17-play drive that went 87 yards and included four third down conversions (including the touchdown) and one fourth down conversion.

The Tyler Palko era, so far. Sam Mellinger of the KC Star has been tracking Palko's drives through his three career starts: "26 drives, 13 punts, six interceptions, four field goals, one fumble, one turnover on downs, and one glorious TD."

Five first half thoughts: 1.) The Chiefs offense is really bad. There's really no sugar-coating it. There's nothing they do well. 2.) The Chiefs defense continues to play at a high level. If the offense wasn't so bad, the defense would be the story right now. 3.) The Kyle Orton era (so far) has lasted....one play. 4.) That hail mary was huuuge for the Chiefs. I'm not sure the Bears can score much on the Chiefs defense.

First kickoff to Devin Hester: He fields the kickoff and returns it 23 yards.

Chiefs get a big play from Dexter McCluster. A career long run, actually. The Bears defense quickly started to collapse on the Chiefs offensive line but Palko handed it off to McCluster, who scampered for 32 yards, a career long.

Second kickoff to Devin Hester: Kicked out of bounds, which is a penalty.

Sixth punt to Devin Hester: Out of bounds.

Chiefs defense with a huge red zone stop. The Bears had a first and goal in the red zone but KC stopped them thanks to back-to-back sacks from Tyson Jackson and Justin Houston. Those two sacks were basically three points as the Bears missed the field goal attempt.

Seventh punt to Devin Hester: Fair catch and a fumble but Hester recovers.

Why all the low-risk plays on third and long? The Chiefs have had a number of plays on third and long that were quick outs to the receiver, shallow crossing patterns or even draws to McCluster. I can see why they're doing that in the second half -- KC is holding a seven point lead and simply can not turn it over. The defense is playing well enough that you don't have to risk a turnover on a third and long.

Chiefs defense comes up huge in the red zone, again. Gotta give the Chiefs defense credit. The Bears offense was moving down the field under four minutes in the fourth quarter and entered the red zone. Caleb Hanie tried to hit Roy Williams at the goal line but the ball was tipped out of his hands, bouncing in the air. Chiefs S Jon McGraw was right behind the group of defenders and picked up the tipped pass for an interception.

10th punt to Devin Hester: Dustin Colquitt had a 69-yard punt that would've put the Bears at their own 11-yard line but a penalty called it back. Luckily, the re-do was still successful as Hester was able to field it and went nowhere. The Chiefs gave up about 19 yards from the first punt to the second one.

11th and final punt to Devin Hester: It's a touchback. This one came with 13 seconds remaining so it was by far the biggest punt of the game.

Chiefs win the game with a turnover. Finally, the four-game losing streak is over! Javier Arenas picked off Caleb Hanie's final hail mary to seal the win.

The best defensive performance of the season for the Chiefs. They hold the Bears to three points, created three turnovers and ended with a whopping seven sacks. including three from the rookie Justin Houston.