What does Santa Claus have in his sleigh for the Chiefs this Christmas Eve? Well, I don't know about the rest of you, but I'm hoping that it's going to be a whole lot of winning starting this afternoon with at Arrowhead Stadium over "Da Raidaaas!"

That's right, today the Chiefs need a few gifts if they want to remain in contention for the only gift that really matters in the National Football League...the Super Bowl. This season, the Todd Haley-led Chiefs cornholed themselves out of the ability to control their own destiny, as far as the playoffs are concerned, by losing eight reindeer games.

Unless you only come out for Chiefs football around Christmas every season, then you probably know the Kansas City Chiefs fired Todd Haley after a blowout loss to the New York Jets two weeks ago. It was a bittersweet decision made by Clark Hunt and Scott Pioli that left some Chiefs fans scratching their heads. After all, Todd Haley was an NFL coach of the year candidate in 2010 and the Chiefs had been plagued with major injuries to start out the 2011 season.

However, none of that matters at the moment. You see, the Chiefs promoted their defensive coordinator Romeo Crennel to the Interim head coach position and if you let that picture at the top of this article do the talking... Then it might just tell you that our Chiefs beat the undefeated defending world champions last Sunday.

Why doesn't it matter? Because at the moment, all is right in Kansas City. Romeo Crennel and his five Super Bowl rings look like they have a perfect opportunity to become the permanent head coach of this team and the Chiefs still have a snowball's chance at making the playoffs.

What is standing in their way? 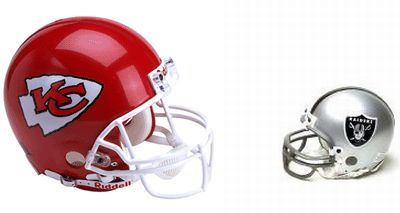 Well their first obstacle is obvious -- the Raiders. A team that the Chiefs haven't beaten at home since November 19th, 2006. To put that in perspective, Lawrence Tynes was still the kicker and Larry Johnson ran for 154 yards and two touchdowns....so it's been a few years.

Look, this is not an impossible win for Kansas City today. The Chiefs have beaten the Raiders 53 times in team history and we all watched them blank the Raiders in the black hole 28-0 back in October. So, it can be done.

However, these games are always unpredictable and you can just never tell when the Raiders are going to decide to play lights out. The Chiefs are going to have to get down and dirty to win this game today. They will need to do everything that they did against Green Bay with a side of actually getting into the end zone more than once in order to have a shot at the "W."

After last week, I am thoroughly convinced that Romeo Crennel will have this team ready to play... but will that be enough? In the October match up, Carson Palmer was thrown to the wolves from his couch, playing well before he was ready to go after that ridiculous trade (in my opinion) that Oakland made with Cincinnati to obtain his rights. That's not going to be the case this time around and even though some of you might not believe that Carson Palmer is that good, he has thrown for 2,099 yards in seven and half games. He can move the ball and today the Chiefs are probably going to see a more fluid offense then before, so they better be on their best game.

Even at the Buffalo Low Down they're predicting that the Broncos will win 31-20, which would not be good news for Kansas City. The Denver Broncos are leading the division at 8-6 and a win today would knock the Chiefs out of the playoff hunt this season. Of course Broncos fans are going to predict a victory for their team, but who do you think is going to win AP....

Go Bills! I hope Tyler Thigpen somehow comes in and throws for four touchdowns and catches one for old times sake on the way to a victory. Where is Mark Bradley when you need him?

This particular game isn't quite as dire as the Broncos game. The Chiefs only need the Chargers to loss one of their next two games in order to get into the playoffs. However, it would be good to see them lose this one, instead of having to cheer for the Oakland Raiders next week... Ugh.

Needing the Chargers to lose in December is asking a lot. Since 2006, the Chargers are 23-2 in the month of December. When you look at those numbers, all that you can really say is maybe they are due for a loss? This might be where we really need some help from Santa Claus.

This game kicks off after the Chiefs play, so we could have some huge Detroit Lions fans around here today if everything starts to fall into place.

It's Christmas time, and for the second year in a row the Chiefs are still in the hunt. Last week was an incredibly thrilling victory over discount double check himself and we got to see the Chiefs offense do some of the things we have been begging for all season.

With Dwayne Bowe, Steve Breaston and Jonathan Baldwin on the outside, Kyle Orton has some Killer B's to throw to and the Chiefs can move the ball. They executed a few screen passes last week and I think we will start to see the running game open up more because of those things. If they can clean up the red zone play...my god.

The defense played incredible last week, Derrick Johnson and Tamba Hali were playing like machines it reminded me of the 1990's when this team could neuter a high powered offense on a weekly basis.