Chris Thorman Is Ready For His Closeup

Share All sharing options for: Chris Thorman Is Ready For His Closeup

A few weeks ago, Chris, my brother and co-founder of Arrowhead Pride, went up to New York to work on a project with Van Heusen that included the original Primetime, Deion Sanders, giving him a makeover.

We saw the pictures of his (badly needed) makeover a few weeks ago but I was surprised when a reader indicated to us that Chris' spread was in ESPN The Magazine.

So I picked up a copy and...yup, there's Chris: 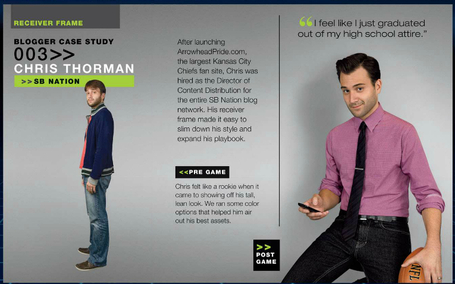 If you can't read the caption it says: "After launching ArrowheadPride.com, the largest Kansas City Chiefs fan site, Chris was hired as the Director of Content Distribution for the entire SB Nation blog network. His receiver frame made it easy to slim down his style and expand his playbook."

And under pregame, it says: "Chris felt like a rookie when it came to showing off his tall, lean look. We ran some color options that helped him air out his best assets."

And Chris' postgame quote: "I feel like I just graduated out of my high school attire." (Note: No joke, many of Chris' clothes are the same style as what he wore in high school and, in some cases, the actual clothes he did wear in high school.)

It's not the New York Times but it's not bad, either, Chris. Well done.