Broncos Beat Chiefs And 18 Things To Remember From The Game

Share All sharing options for: Broncos Beat Chiefs And 18 Things To Remember From The Game

Yeah, this is a bad feeling. Like really bad. The Kansas City Chiefs had a stretch of two games -- Miami Dolphins and Denver Broncos, both at home -- and they lost them both. Tim Tebow's Broncos took care of business against the Chiefs, 17-10, moving KC to 4-5 and in a tie with Denver for second place in the AFC West.
A lot of things happened during the game -- some memorable, some not so memorable. Here are 18 things to remember from the game:
Good way to start the game. A stealth bomber flew over Arrowhead Stadium after the National Anthem. You can see it coming in the distance and it zips right over you. I've been seeing flyovers at Arrowhead for 20 years and it never gets old.
Mistake filled first drive for KC. Jackie Battle up the middle for five yards, Thomas Jones loses four yards and Matt CAssel goes up the middle for nine yards gaining the first down. And then the mistakes started coming. Cassel hit Dwayne Bowe for a first down but it was called back on a holding call on Brandon Albert. They lined up again and it was a false start on Casey Wiegmann before the play started. By that point, it was first and 25 and the Chiefs didn't have much of a shot. The total on that drive -- nine plays, zero yards.
Chiefs touchdown-less streak continues. Via Soren Petro after the first drive: "Chiefs have now gone 103 straight offensive snaps w/out a TD. That is the longest active streak in the NFL!"
Broncos go all run on the first drive. Eight plays, eight rushes, 57 yards and a touchdown. Highlights of the drive include Knowshon Moreno hopping over Brandon Flowers en route to a 24-yard run, Willie McGahee going down with an injury and then Tebow bullying his way through the middle of the Chiefs defense for a touchdown.
Chiefs honor Veterans with this sign: 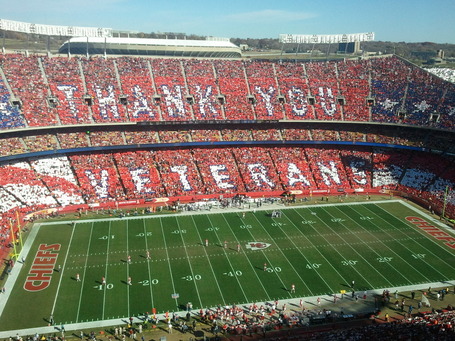 Both Broncos running backs injured in the first quarter. It's a hamstring for Willie McGahee and a knee for Knowshon Moreno. The Broncos say McGahee's return is questionable and Moreno's is doubtful.

Jonathan Baldwin might have had the best catch I've ever seen (but it didn't count). Seriously, one of the best ever. Cassel went deep to him and the Broncos defender was right on top of Baldwin, who turned around and with his hands behind the defender, he pulled in the ball and lodged it against the defender's back. Baldwin turned over and held onto the ball. But....it was all called back due to offsetting penalties.

Broncos have no passing yards in the first half. In fact, they haven't completed a pass since about nine and a half minutes left in the third quarter of last week's game. And they lead by 10 points.

Chiefs first half offense was miserable. 18 yards passing for Cassel and he's also the leading rusher with 16 yards. Punt, punt, punt....you get the idea. KC's offense did nothing in the first half.

Paper airplane all over the place. Someone from the upper level had a big paper airplane they made and threw it off the top. It cruised back and forth, left and right, through the air before finally flying right into a few of the players on the sideline. Incredible path for that paper airplane. Lots of fans are throwing paper airplanes made out of the cards they used to make the "Thank You Veterans" card.

Once again, Chiefs go from lifeless to signs of life. The first half often hasn't been kind to the Chiefs this year and that's been the case today However, as they have before (like the first San Diego game), KC's offense starts to show up in the second half. The Chiefs offense went 67 yards on eight plays to open the second half and get seven points. Here's the touchdown:

Tebow's second completed pass is a big one. His first one was a simple pass into the flat midway through the third quarter and his second one was a 56-yard strike to Eric Decker. That came on third and long, too. What a killer.

4th and five just about ends it for KC. Cassel dropped back to pass in an effort to convert on fourth down and was hit as threw, and the ball fluttered incomplete. Cassel was under pressure today and even when he had time there was never a sense that he and the Chiefs offense were going to march down the field.

Down goes Dorsey. Glenn Dorsey was injured the in the fourth quarter of the game. Trainers helped him as he walked off the field, and then they put him in a motorized cart and took him to the locker room. No word on what's wrong but he had a big leg brace on in the locker room after the game.

Chiefs lose....again. Ugh. What a terrible feeling entering Dolphins and Broncos weeks -- expecting to win -- and then losing. The locker room seemed deflated after the game, like they didn't want to have this feeling again.