Chiefs Beat Chargers And 35 Things To Remember About The Game

Share All sharing options for: Chiefs Beat Chargers And 35 Things To Remember About The Game

The Kansas City Chiefs just had the craziest Monday Night Football game I've ever seen. Maybe even crazier then the Tamarick Vanover overtime return 16 years ago against these San Diego Chargers.

Here's my running diary of the game today that now includes pictures and videos. I'm headed home so we'll have a little more from the locker room later tonight and then tons of stuff in the morning.

Arrowhead is just electric at the start of the game. The fans are going nuts, the Tomahawk Chop is rolling and everyone's waving white towels around. Very intimidating if I'm the opponent. This is awesome.

The first shots of Todd Haley and his beard caused more than a few comments on Twitter. Here's what he looked like to the TV viewer: 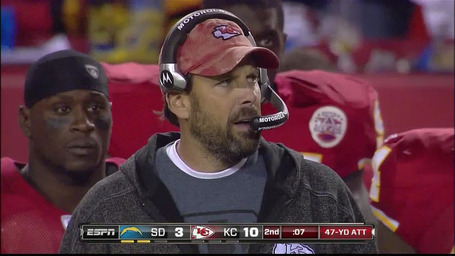 A few players are wearing all red socks which is so freakin' cool. Great touch there. 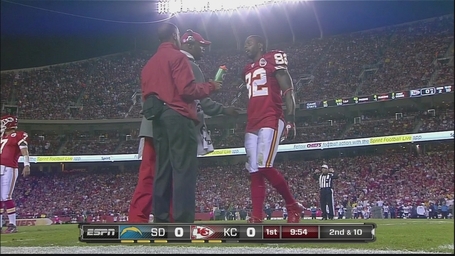 Chargers didn't stand a chance on the first drive. Third and 15 and the crowd is just going absolutely bananas. You just knew the Chargers offense didn't have a shot on that play. Keeping the crowd in the game is a huge part of tonight.

My first prediction is correct. I said the Chiefs would score first, and they did, making it 3-0. Getting off to a fast start is huge for KC. It keeps the crowd in the game and doesn't restrict them offensively.

My second prediction comes true. I said Philip Rivers would throw a pick this game and that's what he did to Kendrick Lewis on their second possession. This is Lewis' third pick of the year. He had one in San Diego and returned it 50 yards, one in Oakland and returned it 59 yards (for a touchdown) and now this one.

The Chiefs give it right back on a Dexter McCluster fumble. That was not a fumble if you ask me. It looked to me like McCluster was down before the ball popped out but, after a review, the officials upheld the call on the field and the Arrowhead faithful gave the officiating crew a piece of their mind.

Chiefs end the first quarter giving up zero points, marking the seventh consecutive quarter they didn't give up a point.

Brandon Flowers nearly has an identical pick off of Philip Rivers. In the Week 3 game against San Diego, Flowers picked off a deep pass and returned it 43 yards. He nearly had the same pick on a deep pass by Rivers but dropped the interception. Oh so close.

Make that two picks so far. We've given Derrick Johnson a hard time in the past for dropping interceptions but after a Rivers pass was tipped in the air, DJ came down with it marking the second turnover for the Chiefs defense. That's eight picks for the Chiefs D in the last four-plus quarters.

Interesting call by the Chiefs to take the pass interference. On a third and 11 from the Chiefs' 25-yard line, a Chargers receiver got called for offensive pass interference on Brandon Flowers. The Chiefs could have pushed the Chargers to fourth down at the 25-yard by declining the play but they decided to push the Chargers back to the 35-yard line and make it 3rd and 21 instead. The result was basically a wash as Rivers hit Ryan Mathews for a nine-yard gain and the Chargers kicked the field goal.

It's Kendrick Lewis day. Now he's recovered a fumble. It was an interesting play because, from where I sat, it certainly appeared that a Chargers defender landed on it first and the ball switched hands. That's now an interception and a fumble recovery for Lewis in the first half. As Kent Babb called him...The Momentum Thief.

Was the Matt Cassel fumble really a fumble? Really tough to tell. Methinks that's too close to overturn but the officials did. Here's a slow-motion look at it.

The Chargers continue to beat themselves. This team is so talented yet they're so flawed. They had the ball down around the 22 yard line with less than three minutes in the half and they were hit with an offensive pass interference and a holding call, knocking them back to a third and 32 as the 44 yard line. This drive ended in a missed field goal for San Diego.

There's a steady flow of smoke rolling across the top of Arrowhead Stadium. I'm guessing it's either from the touchdown fireworks or the tailgaters.

Another weird stretch to end the half. Chiefs coach Todd Haley did this last week, too. It seemed like, as the Chiefs were getting the ball back with about a minute left, Haley was going to run out the clock. And then he decided to throw it deep (and got it). To me, I didn't think the Chiefs had a clear plan right there as they ran the ball and let the clock run before flinging it deep. Whatever happened, it ended up working as Ryan Succop hit another field goal making it 13-3 headed into halftime. 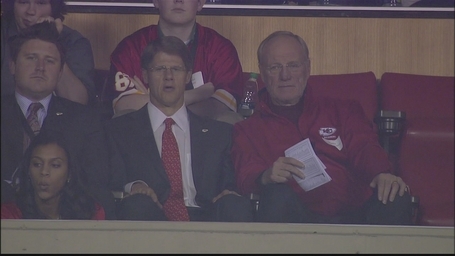 Momentum at halftime. The Chargers have moved the ball well on a couple of drives but turnovers and silly mistakes are killing them. Eventually they gotta figure that out, right? I'm writing this at halftime and, while I predict a Chiefs win, I still think this one goes down to the wire. I'm sticking with my 24-20 prediction.

Rough stretch for Baldwin and Cassel. Cassel went deep to Baldwin down the right sideline and he leaped up to seemingly make the grab. The problem? He couldn't hold onto it, dropping the ball on his way down. On the next play, a pass to Baldwin from Cassel was intercepted.

Whew. The Chargers quickly drove down the field at the end of the third quarter bringing up a first and goal. A touchdown really would've knocked the wind out of the Chiefs and taken all the momentum back to San Diego. However, on the Chargers seventh (!!) trip inside the 34-yard line of the night, KC's defense once again stood strong and forced a field goal.

This is weird: we're actually seeing holding calls against the offensive linemen blocking Tamba Hali. Seems like that never happens. I count three so far tonight.

The Chiefs finally start rushing the ball and it pays off. At the start of the fourth quarter, we had: seven yard Cassel scramble, 11-yard Jackie Battle run, five-yard Battle run and then the big one, an 18-yard run by Battle to the one-yard line, and he punched it in a play later.

Two close calls down by the goal line. The Chargers went 80 yards in 10 plays in less than five minutes to tie this game up but both calls were reviewable. First, Curtis Brinkley jumped over the pile at the goal line and stretched his arms out to move the ball past the plane, making it a touchdown. However, right after it passed the plane the Chiefs knocked the ball out, making it look like a fumble. The refs called it a touchdown and a review upheld that. On the two-point conversion, Brinkley caught a pass down the left sideline and barely got the ball across the plane, making it a successful two-point conversion. The two plays are posted below (via @cjzero) 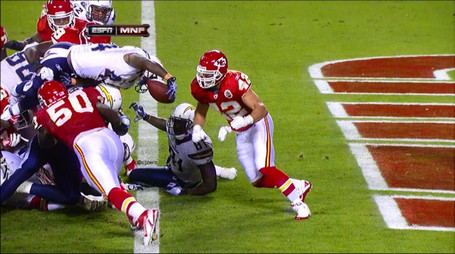 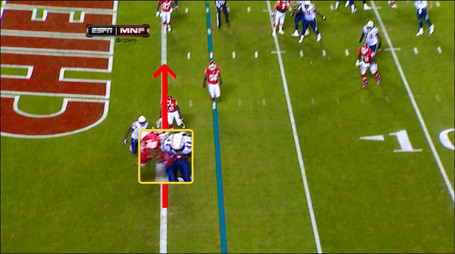 3rd and 18. The Chargers were facing a third and 18 with under four minutes remaining and the Chiefs, for some reason, blitzed on the play allowing Patrick Crayton to get open and make the reception....19 yards down the field. This is your play of the game.

OH MY GOSH! Fumble! Chiefs get the ball back! Wow!

Chiefs lose the toss in OT. Teams losing the coin toss are 2-1 this year and they were 11-8 last year.

3rd and 18 revenge. Remember the Chargers converting on 3rd and 18 to keep their drive alive? KC just converted a 3rd and 13 to bring them into field goal range. Cassel to Breaston for 17 yards. Awesome.