Share All sharing options for: Al Davis And Tomorrow's Chiefs...

Today, October 8, 2011 something happened to distract me from my normal writing cycle.  Legendary Raiders football owner Al Davis passed away.  Before reading that this morning, my mind was brewing on all things Chiefs, trying to determine what exactly I was going to spout off about today.

Now, the man that most Chiefs fans "loved to hate" has truthfully passed on and it is a weird moment in time. Al Davis was a champion, icon, hall of famer and one of the greatest villain owners in the history of sports. All of the Al Davis jokes I have written and read over the years are spinning in my head this afternoon. The creator of the "Just Win Baby" motto is actually gone from this world.

Think about that for an extended moment and let it really sink in.  No more Al Davis.

It really was hard to imagine a world where the outcome wasn't Al Davis living forever and running things his way.  Well, now that strange place is here and it will be interesting to see what happens with the Raiders organization. Right or wrong, it has long been speculated that perhaps the team would be better off without Mr. Davis's extremely focused way of doing business. So watching the Raiders future unfold without him will be a fascinating trek into the unknown.

For this piece, it won't be all Al Davis talk, after the jump we will break down some Chiefs players for tomorrow's game. However, I just wanted to send my regards out to Raiders Nation for their sad loss.  This is a huge loss for the game of football and I couldn't write this, without mentioning it.

RIP Al Davis... Thank you for the rivalry! 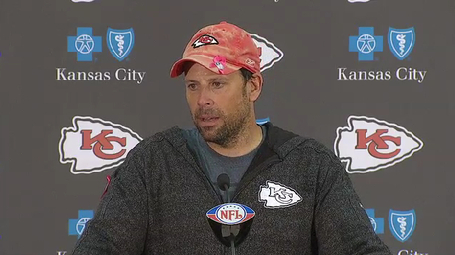 Last week, I suggested that Maybe the Chiefs should let Matt Cassel play football with a shoe. The team of course responded with their best game of the season and a victory to boot.

Now the Chiefs are 1-3 and are going on the road again to an Indianapolis Colts team that is severely missing Peyton Manning and has less wins than the Chiefs do with an 0-4 record. Can a 1-3 football team go into a trap game? Theoretically I guess it is possible, and that is what the Chiefs need to avoid tomorrow.  They need to play better than they did last Sunday if they want to continue straightening out this season.

350 total yards (against the Vikings) is not going to win very many football games.  Though it is a step in the right direction and the Chiefs needs to continue to build on their offensive resurgence from last week.  Let's take a look at a few players I would like to see step up to bring the Chiefs to 2-3 on the season.

While he had a couple decent runs against the Vikings last Sunday.  Going for 37 yards on 11 carries is terrible considering that one of those runs was 12 yards. Quite simply, if the Chiefs are giving Thomas Jones the most touches, then I want to see the most production out of him.

Four games into the season we have not seen any evidence pointing to reasons that Thomas Jones should be the starting tailback for the Chiefs getting the most carries. Jones is averaging 2.8 yards per carry and only has 111 yards on the year.  This simply will not do, if Haley insists on starting the aging team leader, then as fans we should demand to see some results.

The Dex-Factor is an exciting football player, yet I am not sure the Chiefs are using him right.  Take the draw play, the Chiefs love to give Dexter the ball in this manner and it works to a certain extent.  However, if the draw play is your only weapon, then teams are going to look for it the entire game.

This team should get more creative with Dexter and make it there number one goal to get him the ball in space.  When he gets the ball with room to run, he is a serious threat to score and I wish the Chiefs would examine this. Now, there are several ways they can do this, but most notably I would like to see them pitch it to Dexter with LeRon McClain running lead block. Perhaps some end around's with Dwayne Bowe leading the way for McCluster would do the trick, anything that gets him on the outside that isn't a screen pass. This man could be a winning lottery ticket the Chiefs just need to cash in on Sunday's.

The line has been playing well.  With that comes only one problem, the Chiefs have a healthy 6'9" 340 lb potential monster just sitting there not contributing. Continuity is a big thing in offensive line play, but it seems the Chiefs need to figure out a way to get this behemoth involved on Sunday's.

Whether that is subbing him for a tight end on running plays, or having him spell Barry Richardson at times.  They need to get Jared Gaither involved in the process. He is far to good to be warming the bench if he is healthy.

Houston we have a problem (obligatory reference.) Why do the Chiefs have one of college football's top pass rushers last season subbing out when it is surely time for him to do what he does best.  It is obvious that the Chiefs are lacking push outside of Tamba Hali when it comes to the pass rush.

The answer is staring them right in the face.  Unleash this man, he should be getting after the QB, not Cameron Sheffield (no disrespect, he has made an incredible comeback.) In all phases of the defense, Justin Houston has played better than Cameron Sheffield and it is time to reward the guy by letting him go after his first NFL sack.

Since he rookie season, I have not seen Glenn Dorsey struggle as much as he has this year.  He is getting pushed around a lot and isn't helping Tamba Hali make as many plays as he has in the past.  Actually, I think the improved NT play may be hindering Dorsey a bit.  Now that he isn't helping Ron Edwards hold the point, he seems lost out there.

Romeo Crennel needs to help him redefine his position on this defense, because the man is uber talented and can be a force.  Right now though, his wheels are just kind of spinning and he looks like a rookie again.  Once Glenn Dorsey figures out how to work with Kelly Gregg, I think this line will go into pure beast mode.

Sure, I could have went off on another tangent about Matt Cassel, but last week he did his job okay and I want to see what he does tomorrow. Really the fact that Al Davis died just kind of took the wind out of my writing sails, it is a huge blow to the NFL and I was totally shocked to read it from Joel this morning.  It was the last thing that I expected, Al Davis just seemed indestructible to me, and it is a sad day indeed.

Beyond that though, the Chiefs need to get another win tomorrow and this may be the most winnable game they play all season. So here is to the Chiefs going into Indianapolis and playing a tough football game.  The kind of game that Lamar Hunt and Al Davis use to talk about when the were both helping to form this amazing league we now call the NFL.  Go Chiefs!!!