Staring Into A Black Hole.

Share All sharing options for: Staring Into A Black Hole.

It has been a long two weeks here in Kansas City. In the earlier games against Chargers, Vikings and Colts, the Chiefs had built up some solid momentum after an abysmal start where they were outscored 89-10 in their first two games this year.

Then came the bye week and you have to wonder whether or not that momentum can continue against the Oakland Raiders tomorrow in the Black Hole. The Kansas City Chiefs need this victory tomorrow or they risk falling back into the pit of despair they dug for themselves at the beginning of the season.

What does Silver and Black Pride think? carson-a-no-go-seabass-out-trouble-vs-kc

As has been reported here on SB Nation, Carson Palmer has gone from immediate starter to the possibility of starting the game standing on the sideline with a headset and a copy of the Raider playbook.

For the Chiefs it shouldn't matter if Shane Lechler is playing quarterback, the team needs to win this game. Currently the Chiefs are sitting at 2-3 and are in a good spot to rumble back into the divisional race. A season that some considered dead early on, can still be very much alive if the Chiefs can maintain their momentum from before the bye week.

The Chiefs have beaten the Raiders 52 times, can they do it again tomorrow?

On the other side of that coin, the Chiefs have lost to the Raiders 47 times and the teams have ended in a tied ballgame twice. This seems like too heated a rivalry to end in a tie doesn't it? Tomorrow we should see a winner though, and it wouldn't be hard to pick the Chiefs in this game.

Despite the catastrophic injuries the Chiefs suffered early on, this team managed to come together, win a couple games and unearth some potential at running back with Jackie Battle. Though some of that improvement may have been a mirage set in place by the Chiefs playing back-to-back winless teams.

Even if that is the case, the Chiefs have a tougher challenge of keeping that fire going. Mirage or not, something was clicking for the Chiefs against Minnesota and Indianapolis. They need to find a way to keep all of those positive things in place in order to have continued success against a Raiders team that will play them very tough under any circumstances. It is just the way this blood feud works.

What is working against the Chiefs (or perhaps for them) is all of the distractions that have been brought on by the media. Themes such as:

*Todd Haley potentially being fired if the team didn't win in Indy.

*The ongoing saga that is Jonathan Baldwin not playing football.

*Can Scott Pioli and Todd Haley coexist? Or do they hate each other?

*The Chiefs wins were meaningless, because they are 2-0 against winless teams.

* Matt Cassel will never lead this team to a Super Bowl.

You have to wonder what the Chiefs organization is doing behind closed doors to keep this team focused. We know that the players are having rousing games of cornhole in the locker room, but beyond that it is kind of a mystery.

What we do know is that the Chiefs need this victory tomorrow against a tough Raiders team on the road. A team that beat the Chiefs twice last year when it appeared that the Chiefs had the better team. That is thing about this rivalry, it doesn't matter who has the advantage, both teams are going to come to play on Sunday's. With the recent passing of Al Davis the Raiders are going to even more primed and raring to go then ever before. The Chiefs are going to have to be on their A+ game from start to finish. Especially, if they have any dreams of limping out of the Black Hole, blood soaked with a victory in their hand.

After a horrid start, Matt Cassel has looked significantly better. Which Matt Cassel will we see tomorrow? I really have no idea. Every time you think you have this guy pegged as a certain definition of quarterback, he does something that makes you question what you believe about him.

Todd Haley says he doesn't want any yo-yo players on this football team. Well, in my opinion, that is exactly what Matt Cassel is. He is a quarterback that has all of the tools needed to be successful passer, but sometimes forgets where he put his toolbox for games at a time.

It doesn't help the situation when the Chiefs call plays that limit Matt Cassel. He appears to be a guy that needs to throw the ball to get into a rhythm and fails to do that when the Chiefs have him throw several screen passes and shallow outs to start games. So, the Chiefs need to get the ball moving early on against the Raiders, let Matt Cassel find his groove quickly and they will probably have a better shot at success.

Can Jackie battle move the chains against Oakland?

First off, let me say that Jackie Battle really surprised me against the Colts. He ran hard and didn't seem scared of making first downs like in the preseason. Based on that game, I was 100% wrong about Battle needing to be cut before the season. He played a very nice game against the Colts and deserves some recognition and mad props. 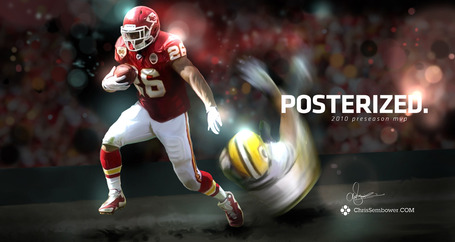 That picture is my current screen saver (isn't Chris amazing.)

According to NFL.com the Colts give up 136.7 yards per game and are ranked 30th in the league. Keeping that in mind, it would be okay to temper your expectations for Jackie Battle tomorrow. Do I want him to be the next super star running back discovered in Kansas City's rich history? Of course I do, at least to keep the seat warm for Jamaal Charles.

However, I have seen several players flash greatness before, only to find their way back to obscurity soon after. Mike Cloud, Kolby Smith and Derrick Blaylock all come to mind, bless their hearts.

With the Raiders tomorrow, they are better than the Colts rush defense wise. They have only give up 113.2 yards per game and are closer to the average NFL team against the run ranked at 16th. If you accompany that knowledge with how the Chiefs performed against the Raiders in the final game last regular season, than it may be hard to envision Jackie Battle having much success.

Their defense matches up very well against the Chiefs, the smaller lineman Casey Weigmann and Ryan Lilja struggled against them mightily last season. Will the emerging Jackie Battle pounding the ball up the middle make all the difference? We shall see Chiefs fans.

It is getting to the point that some of our 2011 draft class, may actually be our 2012 draft class. No Ricky Stanzi, Jerrell Powe, Gabe Miller (due to season ending injury) or Jonathan Baldwin on the field this year at all, at any point.

Out of those guys, Jonathan Baldwin is the most likely one to see a spot on the active roster tomorrow, but as a fan don't you want to see all three start to get exposure to an NFL sideline?

It would certainly make my day tomorrow to see anyone of those three guys on the active roster. Especially our first round pick Jonathan Baldwin. I understand the special teams argument and hesitation, but to me, you get your best play makers on the field if they are healthy. Jonathan Baldwin has the potential to be a dynamic play maker in the NFL for the Chiefs. Could it start tomorrow?

There are a lot of things that I would like to see tomorrow. First and foremost of course, is seeing the Chiefs get a "W" against Da Raiders. It was really easy to be proud of this team for what they did in Minnesota and Indianapolis, watching them win is so much easier then being witness to them getting pounded by last seasons bottom dwellers. The Chiefs played rather well and they deserve all of the credit in the world for there mini turn around.

Though now the time for credit is over, they need to go out there tomorrow and prove it even more. Show that this is a team that lost three great players in three weeks, got pummeled early in the season and is still swinging. Perhaps starting to prove that Todd and Scott did build a team with a solid foundation that was built for the long haul.