Ramblings Of An Idiot: 21 Should Be The Chiefs 12

Share All sharing options for: Ramblings Of An Idiot: 21 Should Be The Chiefs 12

Note: This piece was written on Friday, Oct. 7th, before last weekend's game vs. the Colts.

Pats West is the moniker that was incorrectly slapped onto the Chiefs team when Scott Pioli took the job as the new GM in Kansas City. There was a lot of talk about how Pioli would be bringing the New England team building philosophy to the red and gold, and the first major trade of the Pioli era seemed to support that title. Matt Cassel and Mike Vrabel were added to the K.C. team as new leaders on their respective sides of the ball. They brought with them a work ethic and football acumen taught by the very team Pioli helped to build in New England. Since the day Haley was named the coach of the Chiefs, no title has seemed less appropriate than Pats West.

I submit to you (those that grace my article by spending a small portion of your valuable time to read) that the Chiefs look a lot like the Patriots. It's more of a mirror image than a direct comparison, but there's a lot to learn by looking at a mirror image, and the Chiefs should take notice of at least one thing that the Patriots did last season, and will soon be doing again.

Before I type anything else I feel that I should point out one thing: I am a defense lover. I only know as much about offense as I had to learn in order to play defense. I've tried to open my eyes to a lot more of what happens on the over hyped side of the field, but I am by no means a student of offensive football. The NFL game has been changing with the addition or tweaking of rule after rule that pigeon hole the defenses and set the passing game up for success. I don't really like the direction the game is headed in, but as an obsessed fanatic I'm also hell bent on understanding it on a nuts and bolts level.

It's this nuts and bolts thought process that has lead me to what I hope will be an interesting thought completely centered around the 2 minute drill.

The two minute offense, the no huddle offense, and the muddle huddle offense all have very similar characteristics and goals. As the passing game has become more and more relevant in recent seasons defenders have switched from a 4-3 base (strongest against the run) to a 3-4 base front (stronger against the pass with more athletes on the field), but that gradual change was just the tip of the iceberg in terms of defensive scheming against the pass. The Ryan brothers, among others, have been pushing the envelope of complexity for defensive play callers.

Even with all the advantages of the new NFL passing game defenses have still stood atop the pile come playoff season. And the biggest reason for that has to do with the on field misdirection perpetrated by defensive coordinators. Weather it be zone blitzes, nickel and dime zone packages, line stunts, varied personal packages, "dirty" alignments at the snap, scheming, overloading, or any other of the many forms of trickery .... the result has been positive for NFL defenses. The schematic has been written, and the buzz word is confusion. Confuse the offense so they never know what's coming and revel in the basking glow of sacks, picks, and negative plays. 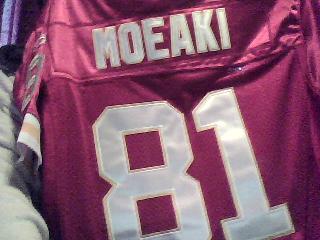 However, like 2 boxers circling the ring, eventually one will find a hole in the others defenses and exploit it. That hole in late 2010 and 2011 has been the hurry-up offense. It might be a no huddle in the middle of a quarter or the 2 minute drill at the end of the game. The only thing that really matters is coupling the offenses ability to do multiple things with a single personnel package, while eliminating a defenses ability to substitute players.

For more specifics lets take a look at the New England Patriots 12 personnel package. The (12) translates easily enough into 1 RB and 2 TE's. At any one time there are 5 eligible receivers on the field for the offense. In the case of the 12 package (1+2=3) there are 2 spots left for WR's (Let's say Welker and Branch). The Patriots have 2 talented TE's in Gronkowski and Hernandez, which leaves Green-Ellis as the RB. Added to those 5 are the 5 linemen, and the QB.

This package for the Patriots is a killer in no huddle mode. Both TE's can catch the ball well or block. They can play out wide as receivers, stacked on either side of the line as blockers and slot players, or one can line up in the backfield as a FB in order to morph the 12 into a make shift 21. Welker can play the slot or out wide. Branch plays as a dedicated WR, and Green-Ellis can shift up to the slot kicking Welker out wide to form a 0 (Zero) or 'empty' set with 5 WR's and no backs.

From the defensive perspective, the Patriots come out in 12 personnel on 1st and 10. Crennel decides to play down and distance, and so sticks with his base defense. The Chiefs line up in a 3-4 base and New England runs the ball for a 4yard gain. It's now 2nd and 6 and the Pat's go into a no huddle (hurry up) offense.

The Chiefs have no time to make any substitutions. They cannot switch into nickel. They are stuck playing a 3-4 base against whatever NE throws at them. They have the option to blitz as often as they would like, but no chance to swap out players to get fresh legs on the field. The Chiefs are going to have to play a more conservative version of their base zone. Eventually, if the drive goes on for multiple 1st downs, the Chiefs are going to have to spend a time out to get fresh pass rushers on the field or to put in a nickel or dime package. Worst of all, if NE can keep the tempo up, the Chiefs down linemen are going to be sucking wind and become much less effective at pushing the pocket. The Chiefs will be forced to blitz to get any pressure at all on the QB.

The Patriots come to the line of scrimmage and go with a 5 wide set. Both TE's are out wide. Welker is in the slot, and Green-Ellis joins Branch and Hernandez all on one side of the field. The Patriots have just set up a 5 WR formation vs. a 3-4 base defense that doesn't have enough corners/safeties to defend them. Justin Houston is now lined up on Wes Welker and McGraw will have to cover Gronkowski in the deep middle. It's a horrible mismatch in the Patriots favor, and there's nothing the Chiefs can do about it.

The ball is snapped and Hali somehow plows through the blocker and gets in Brady's face almost immediately. Green-Ellis runs a quick curl in, now occupying the spot on the field that Hali vacated as he moved into the backfield. DJ makes an incredible open field tackle and holds Green-Ellis to a 5 yard gain. Even with everything going right for the Chiefs on that play, the mismatch is too much to overcome. They needed their nickel package on the field. It's now 3rd and 1.

New England quickly moves to the line and stacks both OT's on the right side of the offensive line in an 'unbalanced' formation. Welker lines up in the slot on the opposite side and Branch goes out wide to Welker's side of the field. Hernandez goes in motion and sets up as a FB to the heavy side of Green-Ellis while Gronkowski fills the line as the TE. The offense has created an unbalanced line to run behind and shifted it's receivers to the opposite side, forcing the Chiefs to defend them. The Chiefs are now stuck playing base defense against the Patriots 'big' package trying to stop a short run for a first down with 2 OT and a lead blocker opening a hole against Tyson Jackson and Kendrick Lewis who has moved up into the box. I'm sure you can guess the most likely result of this play. 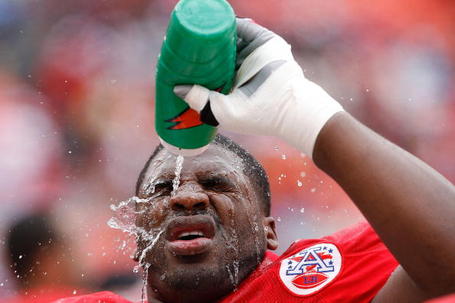 Eventually the Chiefs will be forced to call a time out as their linemen and rushers get gassed. But does that time out really help? Even if the Chiefs run their dime package out on the field to defend the 5 WR shotgun formation on the next play what's to stop NE from just lining up in a 21 with Gronkowski as a FB to give Green-Ellis a lead blocker and running the ball into an undersized defense for the next 4 plays? Hernandez will likely return to the Patriots line up this week, and I bet they can't wait to have him back on the field.

The no huddle offense is the perfect tool to combat the confusion techniques of modern defenses. And if your football team has players with diverse skill sets (like NE's 2 TE's) on the offense, why not run the no huddle as often as your own players' conditioning will allow?

What the heck does all this have to do with the Chiefs? It's a crying shame Moeaki is out for the year, because with Moeaki and Pope as the TE's (both can catch and both can block decently) the Chiefs could employ the same kind of tactics. Jamaal Charles in the backfield with Bowe at WR and Breaston in the slot could do very similar things to keep defenses on the field and mismatched as the offense shifts to multiple sets with the same personnel.

I think the Chiefs STILL have the athletes on the team to play this no huddle game, even without Moeaki and Charles. But, they can't do it out of their base 12 personnel. Instead they would need to use their 21 package. McCluser and McClain (Battle) in the backfield, Pope as the TE, and Bowe and Breaston as the WR's would do the trick. It wouldn't be quite the same as how NE does it, but Pope is capable of playing either TE or a massively oversized slot receiver. McCluster could shift from RB to Slot at will. Battle could shift from FB to RB to TE, and Bowe stays out wide all the time.

We know that McClain can run the ball, and we know that he can block, and I believe he could play TE and run a crossing route if asked. So the question is: