We're ringing in the New Year by looking at possible replacements for...Charlie Weis?

In case New Years Eve started early at your house and you missed the news Friday afternoon, Charlie Weis is reportedly "likely" to leave the Kansas City Chiefs and take a job as offensive coordinator at the University of Florida. We've heard from quite a few major reporters say that this will most likely be happening so there's something to it.

Adam Teicher of the Kansas City Star suggests a couple of possibilities for his replacement: Greg Olson and Nick Sirianni.

Olson is the quarterbacks coach for the Tampa Bay Buccaneers. As Teicher points out, he and Haley worked together in Chicago. I think the key to remember with any offensive coordinator is Matt Cassel. Remember some of Weis' first words in Kansas City? "Fix the quarterback". The National Football Post reportedly shortly after Haley was hired in Kansas City in February 2009 that Olson was a candidate.

Sirianni is the Chiefs offensive assistant coach. He's the guy you see next to Haley: 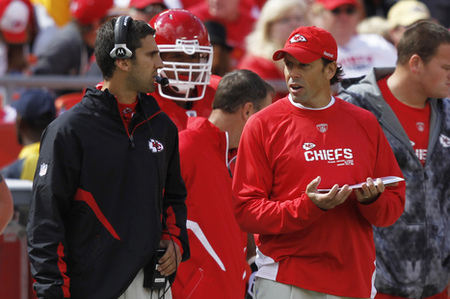 I can't say that I know a lot about him other than that he works with Haley. Teicher has more on him at the Star.

The first thing that needs to happen, though, is Charlie Weis leaving. It sure seems like it's going to happen when the Chiefs season is over. This will be the third offensive coordinator in the Haley era (fourth counting Chan Gailey) so ideally he has a good idea of what and who he wants.