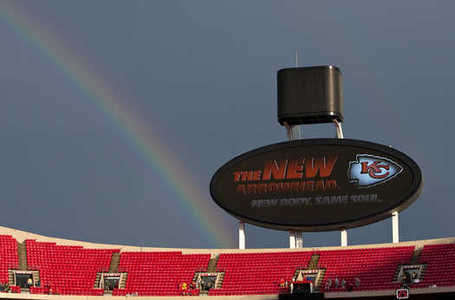 Good morning! We have a good amount of Kansas City Chiefs news for you today. As we head into the long weekend, there will be a lot of roster cuts happening across the league. Be sure to check with Arrowhead Pride for updates on any moves that have an impact on the Chiefs, or follow us on Twitter @ArrowheadPride. Enjoy!

"Meaningless to me," coach Todd Haley said afterward, adding that he was turning his attention toward games that count.

But these four games have, if nothing else, been about self-education for the Chiefs. Kansas City learned what it’ll be, for better or worse, in 2010. They now know what they have, and that includes some strengths and plenty of promise, but there remains a worry that a most important position could be inconsistent.

We don’t know exactly what Cassel is, especially after an uninspiring preseason ended with an uninspired four completions in nine attempts with a touchdown and interception against a watered down Packers defense on Thursday.

Cassel got off to his typically slow start, but wound up hitting 4 of 9 throws for 58 yards, with one interception and a 2-yard TD pass to a wide-open Leonard Pope late in the first quarter. The drive, against many backups, covered 62 yards on 11 plays.

Cassel turned a 7-0 lead over to Croyle and the oft-injured backup engineered an 8-play, 95-yard march in which Jackie Battle broke Jarrett Bush's tackle and went 49 yards On fourth down, Battle plowed across from the 1, making it 14-0.

Chiefs finally get preseason win, 17-13 from The Associated Press

If the Chargers don't win the AFC West, coach Norv Turner might be facing a firing squad. That's how much of a favorite they will be this season.

The Denver Broncos, Oakland Raiders and Kansas City Chiefs might all be improving, but they aren't in the same class with the Chargers. It's hard to imagine San Diego not winning this division, barring an injury that knocked out quarterback Philip Rivers.

As I checked out each player’s locker, David Maxon led his 7-8 year-old Blue Springs Storm football team through the hallowed hall.

You could tell he was the coach because he had a whistle around his neck and the respect of his young charges.

"I’m a longtime Chiefs fan," Maxon said, "and this is a pretty neat part of the stadium."

While the players were too young to remember players like Dawson, Taylor, Mays and Buchanan, they got pretty fired up when they came upon the Super Bowl IV championship trophy.

Preseason bio: After Kansas City's bitter, humiliating 35-10 loss to the Green Bay Packers in Super Bowl I -- a game that reinforced the widespread belief that the AFL was inferior to the NFL -- the Chiefs were looking for payback. They found an opportune target in George Halas and his Chicago Bears. Up 60-24 in the fourth quarter with the ball on the goal line and the clock running down, the Chiefs didn't take a knee -- they called timeout, then scored again when quarterback Pete Beathard tauntingly walked a naked bootleg play into the end zone. Who doesn't like a little good ol' fashioned, gratuitous, by-proxy score settling?

Lokey, listed as the backup nose tackle to Ron Edwards, is not a frustrated fullback pining to carry the ball. But he likes the role as a two-way player.

"I’ll block all day," said Lokey, who also played most of the second quarter and some of the fourth quarter on defense. "I enjoy blocking for other guys just as much as I would enjoy scoring touchdowns. This is definitely something I can do, learning the plays they want me to play on offense and keeping up with my defensive stuff.

"It’s something I had practice with doing it at Texas for three or four years. I try to make sure I know what I’m doing, and if I don’t know exactly who to block, I’ll go block somebody."

That the Chiefs starters can take a long time to subdue a team full of Green Bay reserves. The Chiefs should have had a comfortable lead by the time their starters were finished in the second quarter. It was only 7-0, and Green Bay barely missed a chance to tie at one point when a receiver caught a fourth-down pass just out of bounds.

The blitz | Chiefs vs. Packers from KC Star

The talk has been all about Thomas Jones and Jamaal Charles, but neither of the Chiefs’ two main running backs wound up leading the team in rushing in the preseason.

That honor instead went to Jackie Battle. He clinched the title with 67 yards in Thursday night’s 17-13 victory over Green Bay at Arrowhead Stadium.

Utah Utes football: Home-and-home with Pitt worked out for Utes from The Deseret News