Share All sharing options for: Chiefs vs. 49ers: Todd Haley Has Recent Success Against San Francisco 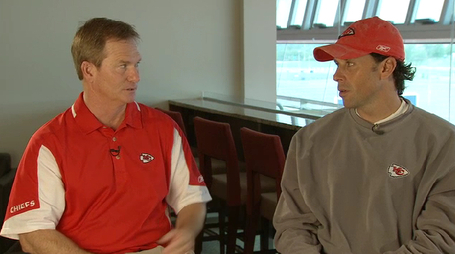 Kansas City Chiefs head coach Todd Haley previously coached with the Arizona Cardinals, the same NFC West as the San Francisco 49ers, Kansas City's opponent in Week 3. He talked to Mitch Holthus on KCChiefs.com about some of that familiarity.

Though the Chiefs and Cardinals are clearly different teams, we'll see if we can glean anything from Haley's past run-ins with San Francisco.

Obviously some differences there so I'm not sure if there's much we can gain from that. They had one poor passing game and one huge passing game each year. Maybe the Chiefs hope it's San Francisco's off day.

Haley said this week that he does remember San Francisco from the NFC West, which could potentially provide an advantage since he says they've been together for a while.

"I'm very aware of this San Francisco 49er team. You can not be fooled by their record right now. That's not coach speak. They're a good, physical, fast football team that has been together a number of years."