Hey everyone, I'm back with this week's Kansas City picture play analysis!  This week, I chose one "bad" play and one "good" play to give the treatment.  I chose these two plays specifically because of the way San Francisco ran their offense Monday night.  The "good" play was the tackle for loss/fumble play in the 1st quarter.  The "bad" play was a long screen pass to start off the Browns first touchdown.  Let's get to it! 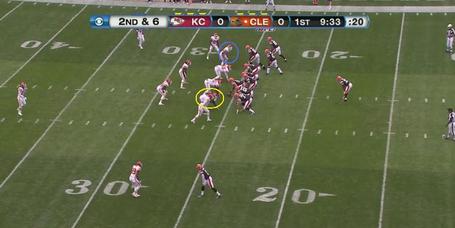 As the reader can see, the Chiefs are in the standard 3-4 defense.  I have highlighted Glenn Dorsey (in yellow) and Mike Vrabel (in blue) to emphasize their actions on this play.  The Browns are in a bunch strong formation with Jerome Harrison being the lone back.  Vrabel looks to be responsible for coverage on one of the receivers in front of him, but the tight end goes in motion, ending up in the backfield. 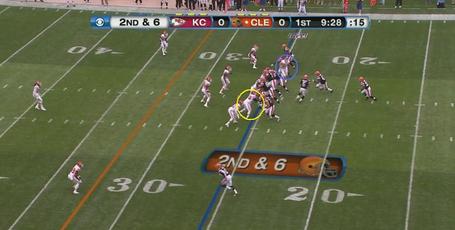 The snap occurs, and because of the pre-snap coverage call, Javon Belcher shifts over to claim Vrabel's pass coverage responsibility.  With Carr and Berry also there for coverage, and with the tight end moving inside as a lead blocker, Vrabel is allowed to get into the backfield.  The Browns were not expecting him to bite as heavy as he does, and the bunched receiver responsible for jamming him at the line fails to get a hand on Mike.  Dorsey gets a good solid base and starts shoving his blocker into the backfield. 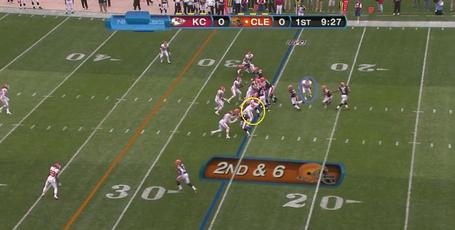 The Browns hand off to Harrison with Vrabel already on top of him.  Their lead blocker fails to recognize where the pressure is coming from and runs right by Vrabel.  Dorsey performs a successful swim maneuver and makes his way into the backfield.  The right side of the offensive line is congested, and both DJ and Belcher are trying to shoot the middle gap that isn't forming. 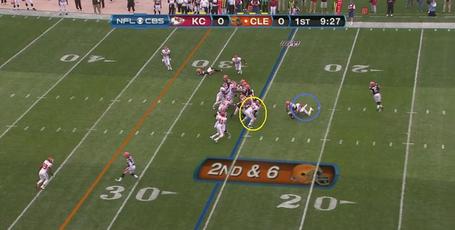 Vrabel lays a hit on Harrison from behind and the ball squirts out when he hits the ground.  Dorsey has successfully gained penetration into the backfield and will scoop up the loose ball for the turnover.  However, look at the right side of Cleveland's line.  They have successfully shoved the defensive end and nose tackle off the line and the inside linebackers are lost in the wash.  If Vrabel isn't there to make the spot and the tackle for loss, Harrison has the cutback and it's up to the Chiefs secondary to make the stop.  In that aspect, the team has to be better because Frank Gore ran all over that side of the field against the Saints.

Play #2:  Dorsey Down Under 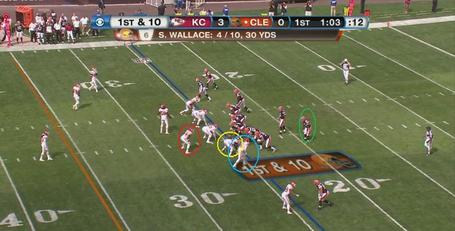 Once again, the Chiefs are in the standard 3-4.  I have circled several players this time:  Dorsey is in yellow again, Tamba is in blue, DJ is in red, and the running back is in green.  The offense has spread out the defense, and the coverage call has Berry helping out Flowers at the top of the picture with Kendrick Lewis in deep center. 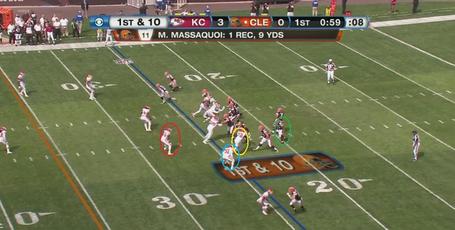 When the ball is snapped, the running back immediately moves to set up the screen.  Both DJ and Tamba start to backpedal into coverage.  Dorsey makes a move inside to try to get to the quarterback.  The Browns left tackle, Joe Thomas, lets Dorsey take the inside path and runs out into the flat to also set up the screen. 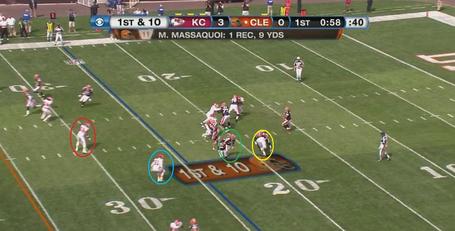 At this point, both Tamba and DJ are looking directly into the backfield to see where the pass is going.  This means Tamba does not see the screen developing in front of him.  Dorsey has tried to get around his man and has been stuffed high and bent over at the waist.  This is preventing him, the best player to make the play, from seeing either the running back or the quarterback as the play sets up right next to him. 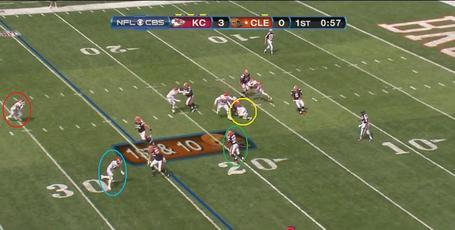 Dorsey, trying to get to the quarterback, gets pancaked in the backfield, causing Shaun Smith to stumble over him.  DJ has moved towards a receiver making a shallow double move and is on the other side of the field from the play.  Tamba, whose responsibility was the flat and any player catching the ball in it, is now staring at an offensive lineman running full speed at him. 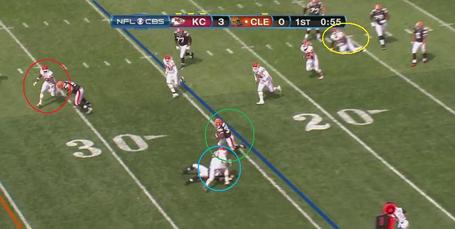 Dorsey is out of the play.  The running back cuts inside to avoid the blocker that has neutralized Tamba.  DJ starts to take the angle from across the field and has to contend with his own blocker.  There's lots of space for the running back to take advantage of in front of him. 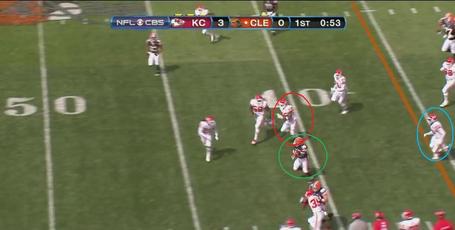 Lewis, DJ, and Belcher finally converge on the running back around the 45 yard line.  The Browns throw another big pass after this and punch the ball in for the go-ahead score.  San Fransisco also ran quite a few screens to wide receivers and running backs against New Orleans.  Tamba must diagnose the play earlier and Dorsey must keep his head and arms up to try and prevent such a play.  And if both players struggle with doing that, I hope DJ can trust Belcher's coverage ability enough to stay home on his side of the field and make this sort of play a lesser gain.