Hey everyone, I'm back with a new (potentially) weekly series!  In this series, I pick a handful of plays from the previous game and step through them with visual aids, describing where the Chiefs went right/wrong.  This week, I picked one "bad" play and two "good" plays.  The "bad" play was a long reception over the middle by Gates that led to their TD in the 1st quarter.  The two "good" plays both came during the final defensive stand:  a big tackle for loss on Sproles, and the final stop on 4th and goal. 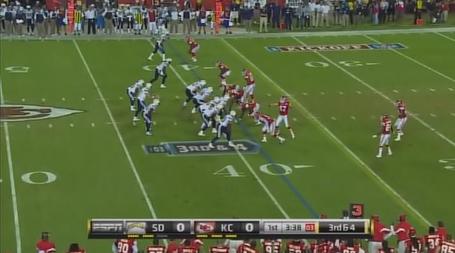 Right off the bat, you can see the Chiefs are in nickel defense, opting for another defensive back instead of two inside linebackers.  Gates is on the low side of the formation.  You can see McGraw desperately pointing at Gates for several seconds prior to this shot, trying to get the attention of the two players standing behind him. 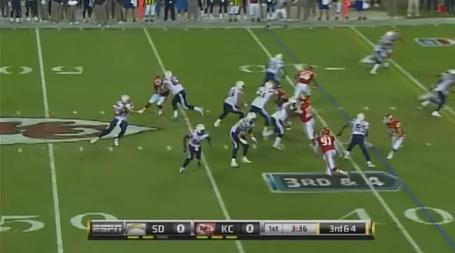 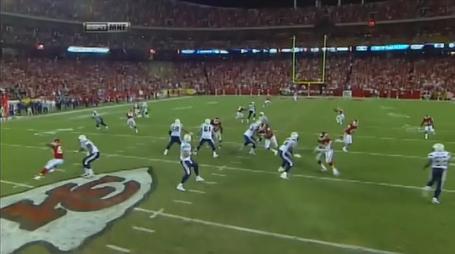 In these two shots, you can see that Gates breaks off the line for an inside slant.  The two running backs next to Philip Rivers have ran out into the flat, with Derrick Johnson covering one, and McGraw covering the other.  The defensive backs that were behind McGraw have fallen deeper into coverage, leaving a hole in the middle...directly through Gates' route. 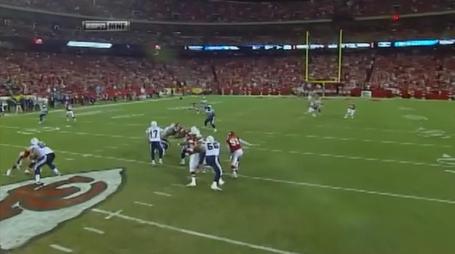 Rivers steps up into the pocket (very little pressure in his face) and throws to a wide open Gates.  If you look at the defensive backs, there's nobody within 10 yards of the all-pro tight end.  As McGraw and Johnson became responsible for the running backs, someone in the defensive backfield missed the call that they needed to step up and cover Gates. 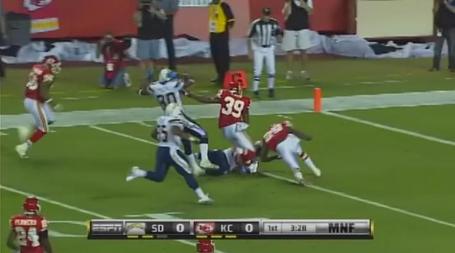 The result?  A massive gain that took the Chargers all the way down to the 4 yard line.  This happened on more than one occasion this week with varying receivers.  Whomever is responsible for calling the coverage really needs to get some of the switches figured out. 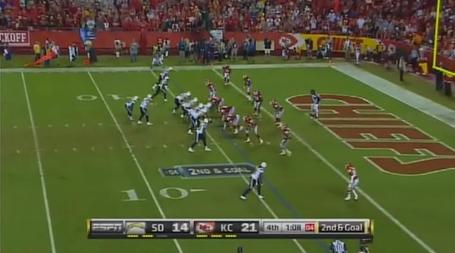 The Chiefs are in their standard 3-4 defense and are backed up deep against their goalline late in the game.  Rivers is in the shotgun with Sproles beside him.  Four wide receivers means the linebackers are more spread out than usual. 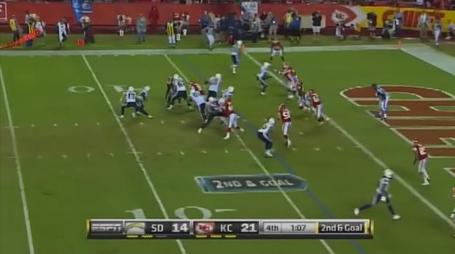 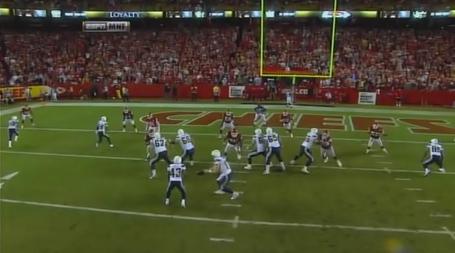 After the snap, Rivers hands off to Darren Sproles.  The linebackers are staying in coverage in case a play action pass occurs.  Ron Edwards turns his blocker completely sideways with the first move and blows by the center right off the bat.  San Diego's left guard turns to the second level to block, and Dorsey gets a good shove backwards on the left tackle. 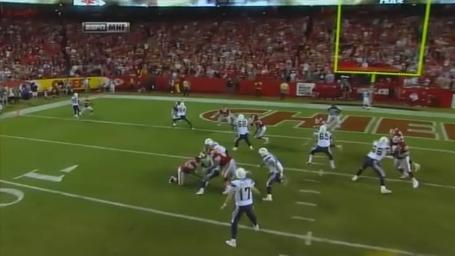 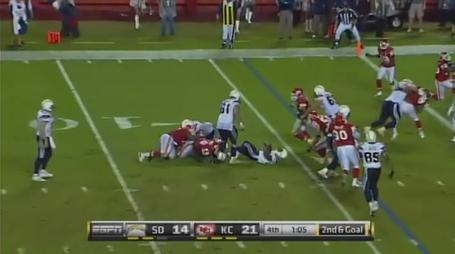 Dorsey drives his man back into Sproles, and Edwards' closing leaves the running back with nowhere to go.  Great play by the defensive line and a big tackle for loss at a crucial moment. 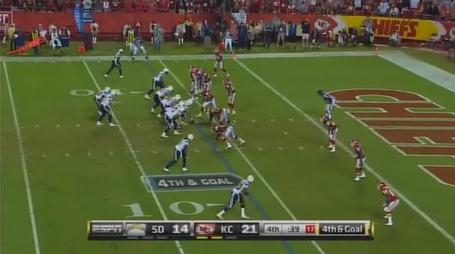 It's the Chargers last chance at tying up the ballgame from the 6 yardline.  You can see the Chiefs are in an odd nickel package from this picture.  While many defensive backs are on the field, three Chiefs are lined up opposite of Antonio Gates to try to stop him from getting off the line.  Rivers again in the shotgun with Sproles lined up next to him. 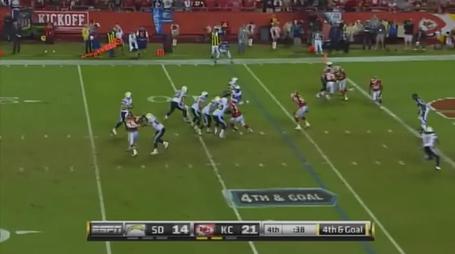 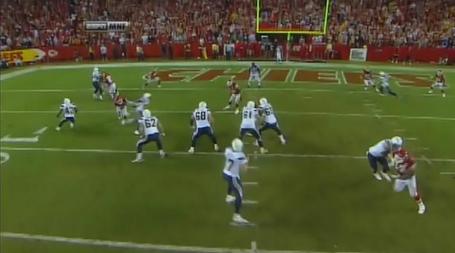 The three Chiefs lined up opposite of Gates stuff him at the line, preventing him from running the inside route that was called for him.  You can see in the bottom picture that Rivers is looking his way.  Sproles has come out of the backfield into the flat, and Tamba will take responsibility for covering him.  Gilberry is beating his man to the outside, and Dorsey is being double teamed in the middle. 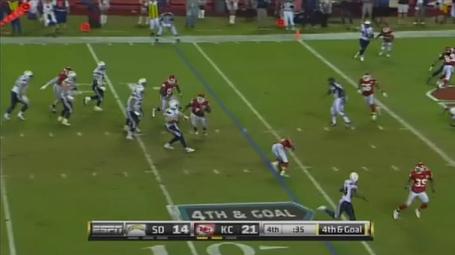 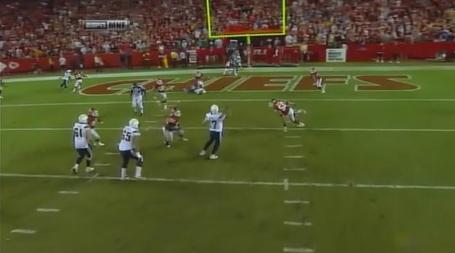 Wallace Gilberry's pressure forced Rivers to step up into the pocket.  The coverage by the defensive backs is still solid, so Rivers moves forward even more to attempt to create a better angle to throw the pass.  In doing this, he steps beyond his pass blocking and into the range of Glenn Dorsey.  Rivers is forced to throw a pass to a well covered Malcolm Floyd at the back of the endzone. 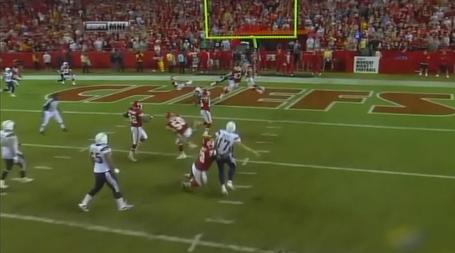 Rivers is hit by Dorsey just after he throws, and two defensive backs close on the floating ball.  Neither gets to it, but due to the good coverage of the secondary, Rivers is forced to throw a difficult pass that sails out of bounds to give the Chiefs the victory.

It was a great win last night, and while the Chiefs have some things to work on, it doesn't get much better than to start the season with a win over a division rival!  Tune in later this week for the defensive grades!