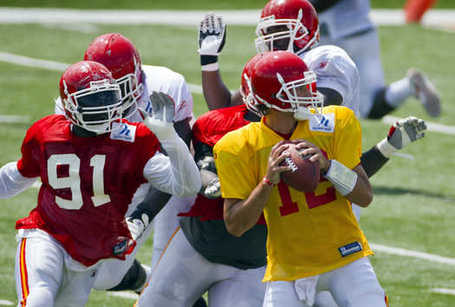 Good morning, AP and welcome to the weekend. Today's Kansas City Chiefs news appears to confirm that Eric Berry is awesome and that our power ranking is 27th no matter what blurb is put after it. Enjoy!

The Chiefs get their first off day of training camp today. They’ll return to St. Joseph for practice on Monday and begin preparations then for Friday’s preseason opener against the Falcons in Atlanta.

"I want them to first and foremost take care of their bodies," Haley said. "That would be my No. 1 thing on the agenda. This is a time to rest. That’s what the purpose of a little time off is. They’ve put a lot of wear and tear on their bodies over the last week and a couple of days. This is an opportunity to rest, take care of their bodies, hydrate, stay off their feet and put them in the best possible position to come back Monday and get back at it and hopefully improve."

Chiefs camp buzz: Berry gets a pick from KC Star

Dexter McCluster should be bigger. People tell him this all the time. His father, Marcus, goes about 6-1 and sturdy — around 210 pounds when he played running back in college. Dexter got his moves from pop, but his size from mom, which bothers most everyone but Dexter.

For a time, McCluster needed to make sure others knew that, too. Small guy? Sure, but watch him try to run over the biggest guy on defense. McCluster made it a point to never go down on his own, to never step out of bounds before taking a hit, all the way until college when his coaches asked over and over and over if he’d just please be smarter about things.

Chiefs' McCluster stepping into the spotlight from KC Star

Despite Chiefs coach Todd Haley saying on Friday that Saturday’s scrimmage would be comparable to last season’s in River Falls, Wis., the Chiefs did not go "live" for any portion of the practice. There were no crushing tackles, no dogpiles to tackle a runner going up the middle and no hard hits on wide receivers that NFL fans have come to love.

Haley said Saturday that a small portion of the scrimmage would be what the team calls "Live" where full-contact is involved except for the quarterback.

Haley was not made available to the media after the scrimmage.

If Chiefs first-round draft pick Eric Berry didn’t feel like an NFL player before Saturday, he has no doubts after a record crowd of 10,721 fans watched Berry and the Chiefs scrimmage at Spratt Stadium.

Berry picked off Brodie Croyle after linebacker Derrick Johnson put pressure on Kansas City’s backup quarterback. Berry quickly reacted to the bad pass. When asked about his first unofficial interception in the NFL, Berry smiled but still had a problem with the play.

"I was more upset that I fell," Berry said. "It is what it is. It’s something that I can build off of and our defense did pretty well today."

Berry returned 14 interceptions in college for 494 yards and three touchdowns.

27. Kansas City: Will Tyson Jackson make a giant leap forward from year No. 1 to year No. 2? Judging from how hard he's working at training camp, that seems to be a possibility. "Tyson is in the early stages of an NFL career playing a very difficult position against grown men," said Haley, the Chiefs' second-year head coach. – AP

Fans braved the heat at Spratt Stadium at Missouri Western to check out the 2010 Kansas City Chiefs. Family Fun Day was all about the kids with everything from moon bounces to autograph signings. The Chmelicek family traveled more than 400 miles from Iowa to see their favorite player. They said the trip was definitely worth it.

"It was awesome," said Iowa Chiefs fan Mary Chmelicek. "There were lots of activities for the kids and lots of places to cool off."

Her husband Craig said he had a good time too even though he didn't get any autographs.

"It was good to see the players even though they couldn't come over," said Craig Chmelicek.

After practice ended, Berry was so popular with the fans that he probably could have won the race for Missouri's seat in the U.S. Senate had he wanted it.

''I got something I can build off of,'' Berry told reporters afterwards. ''Our defense did pretty good today."

Berry was the last Chiefs player to leave the field, spending over 20 minutes in the sweltering heat signing autographs for fans of all ages. "I love the fans,'' he said. ''Where would you be without the fans? They came out here and sat in the sun just like us. They came out here and supported us. I just wanted to show my appreciation.''

Watch it, Eric. It's positive talk like that which will make Chiefs fans elevate you to the Trent Green/Tony Gonzalez/Priest Holmes/Derrick Thomas pantheon of Kansas City's football heroes. And you haven't even played in one meaningful NFL game yet.

27.    Kansas City Chiefs – It’s like a Patriots coaching reunion in Kansas City now, minus Bill Belichick.  The only problem is that Charlie Weiss and Romeo Crennel both failed to prove that they could be successful without "The Hoody."  They have made smart football moves, and this team should be one year better along their path to recovery.  Jamaal Charles was a revelation last year, and the addition of veteran Thomas Jones for depth was good.  The two of them should provide enough distraction to defenses to allow Matt Cassel to stay upright and get the ball out of his hands quicker.