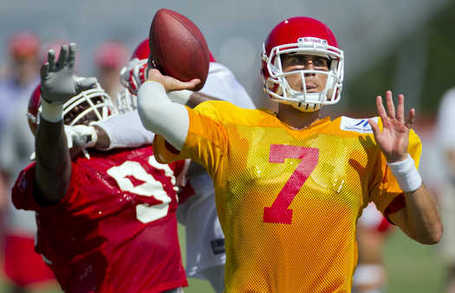 Happy Friday! Today's Arrowheadlines has some great Kansas City Chiefs news for you. The KC Star pushes the Chiefs on just what happened at the closed practice walkthrough, Chambers is tired of talking about dropped passes, and we've thrown in a little BBQ and Hank Williams Jr for you. I am traveling starting tonight through next Saturday. I'll still be posting the news, but i might be a bit later than usual. Enjoy!

For 10-year veteran wide receiver Chris Chambers, who came to the Chiefs mid-season last year, those numbers mean nothing heading into the 2010 campaign.

"Last year is last year. I’m really sick and tired of talking about dropped passes," Chambers said after Thursday’s afternoon practice outside at Missouri Western. "That was last year’s team. That was last year’s group. Receivers are going to get the brunt of that even though it’s a team thing with running backs and tight ends. They all were involved in that. This is a new year. Of course, there’s an emphasis for us to come out here and make plays and catch the ball."

Kansas City’s offensive coaches appeared eager to make those dropped balls a thing of the past.

Drops a concern for Chiefs from News-Press Now

The surprise is gone. That’s what coaches and players say. The wildcat formation isn’t what it once was, with its shock value and defensive adjustments. That was so 2008.

"It’s been done," Chiefs safety Jon McGraw said. "Everyone is exposed to it. You know where the threats are, you know what to expect. There’s only so many things you can do out of it. There’s not an element of surprise anymore."

But offenses still practice it. They have to. The surprise is gone because most teams’ playbooks contain some variation of the wildcat package. Some of those teams, such as Cleveland and Dallas, run it more than others. It’s trendy, and other teams try to keep up. The Chiefs might be late to the party, but now they’re here, and they’re lining up with the quarterback split wide.

Today: Patchy fog before 8am. Otherwise, mostly sunny, with a high near 88. Calm wind becoming southeast around 6 mph.

Tonight: Partly cloudy, with a low around 68. South southeast wind around 6 mph.

A video the Chiefs said was from Wednesday morning’s workout was of a walkthrough and not a regular practice. That supports the claim from coach Todd Haley and not rookie safety Kendrick Lewis, who had said it was a regular practice.

In the video, the Chiefs practiced at the indoor facility at Missouri Western. Players, as they usually do for a walkthrough, wore no helmets or other protective gear and went through plays at a pace far less than full speed.

NFL policy says NFL teams must open a regular training-camp practice in its entirety to the local news media covering the team. The Chiefs closed the practice to media and fans.

Haley, who’s been reluctant to talk about individual player performances during training camp, singled out several players Thursday who he thought "showed up when the lights came on" at Wednesday’s night practice...

— Rookie tight end Tony Moeaki appeared not to be affected by the atmosphere and continued to perform as well as he has in day practices.

— Running back Jamaal Charles had a "little extra giddy up in his step."

— Rookie wide receiver Dexter McCluster "definitely showed up," made a few mistakes but wasn’t afraid to make a big play.

— Rookie defensive back Kendrick Lewis was "all over the field."

— Fullback Mike Cox "stuck his nose in there and knocked the crap out of a couple people consistently."

On the heels of a successful Wednesday night practice where thousands of fans gathered to watch, university officials are hoping for an equally well attended Family Fun Day Saturday.

But if crowds to the Kansas City Chiefs’ training camp were drawn by the cooler temperatures Wednesday, Saturday afternoon’s forecast brings a steamier outlook. There is no rain in the forecast for Saturday, said News-Press 3 NOW meteorologist Justin Gesling, and the day starts with temperatures in the low 70s. However, temperatures will creep up to around 90 degrees by 3 or 4 p.m., bringing with it a heat index of around 102 shortly after the Chiefs wrap practice.

Falcons coach Mike Smith hopes to get cornerback Dunta Robinson, who suffered a hamstring injury last Sunday, back to practice next week. His missed practice for the fourth straight day on Thursday.

Smith acknowledged that it was "possible" that Robinson would not play in the exhibition season opener against the Kansas City Chiefs on Friday, Aug. 13 at the Georgia Dome.

The Kansas City Chiefs first night time practice in St. Joseph, MO was an unmitigated success for the fans as a crowd of more than 10,000 people showed up to watch the team. That was off the field. On the field? Not so much.

It is very clear after watching the team after their ninth practice of camp that their defensive problems of 2009 aren't fixed yet. Not even close. Either that, or the offense is in mid-season form already. The wide receivers are brutalizing the secondary with the lone exceptions of cornerback Brandon Flowers and safety Kendrick Lewis.

Home Sense is a new video series produced by Hunt Midwest Real Estate Development, one of the Kansas City metropolitan area's most active residential developers. There are 11 videos featured in Season One of Home Sense.

Each Home Sense video lasts just a few minutes and is chock full of tips from experts and great visual examples featuring topics like staging your home for a faster sale; construction 101; home offices; kitchen pantries; outdoor lighting; pool safety; and more hot trends in homes like drop zones for organization. What you won't find in a Home Sense video is a hidden marketing message.

Hunt Midwest Gets Social With Home Sense from MarketWire

Barbecue master sounds like the perfect second career for a former pro athlete.

But nowadays, he feeds hungry customers his own "unorthodox," secret-recipe barbecue -- ribs, brisket, pulled pork, smoked chicken, hot links, and something he calls a "barbecue sundae."

It’s doubtful Hank Jr. will be cruising back to Marianna just to hang out in the showroom with his new rowdy friends, but it’s a good bet several members of the Hopkins crew will be watching when his new "Monday Night Football" theme debuts this year. ESPN airs a double-header for the season’s first week on Sept. 13 as the Baltimore Ravens meet the New York Jets and the San Diego Chargers play the Kansas City Chiefs.