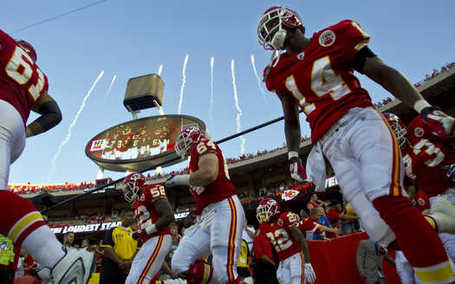 Good morning, AP! There's a lot of Kansas City Chiefs news this morning. From a glimpse into the prep the Chargers are doing for the MNF game, to a story on Nick "the kick" Lowery's work to make life better for others, you'll find it all below. Enjoy!

"If these first few (moves) are any indication, it’s going to be much more difficult," Haley said. "That bodes well for the team. The harder those decisions are, generally the more competitive and the better team you’re becoming."

The Chiefs must be down to the 53-player limit by Saturday. They’ll get one final chance to evaluate in Thursday night’s final preseason game at home against Green Bay.

Chiefs Working on Trimming Roster to 53 from KC Star

Former NFL all-pro and Kansas City Chiefs Hall of Famer Nick Lowery could probably have capitalized on his Ivy League education and fame at Dartmouth and Harvard as a businessman of some kind after his 18-year playing career was over.

Instead, Lowery travels to the poorest places in the country, looking to make a difference for people living in circumstances quite different from those that he grew up in as a youth in Washington, D.C.

"I am blessed," Lowery said. "Not because I’m so good or anything like that, but because I had the opportunities that these kids didn’t have. I grew up next door to (former NFL player and Supreme Court justice) Byron "Whizzer" White. If I hadn’t grown up next door to him, would I have ever even thought that I could one day win his award (given to the top humanitarian in the NFL)?"

•Alex Magee would be a surprise if he’s cut — but only because he was the Chiefs’ third-round pick last year. The Chiefs may keep him for that reason even if his play doesn’t warrant it.

If things went according to plan last Thursday night, Packers receiver Jason Chery might well have been released this week instead of Shawn Gore.

Call it fate or whatever, but something intervened and now Chery has a shot -- maybe still a very long one -- to make the team. Coach Mike McCarthy said Chery will return all kicks on Thursday against the Kansas City Chiefs.

The Chiefs must trim their roster to 75 players by Tuesday, August 31 and then make further cuts to their final roster number of 53 by Saturday, September 4.

The only slight surprise of the first four was Slate, a tight end who seemed to make plays when on the field. However, he does face a numbers problem in that the Chiefs will undoubtedly only keep three tight ends on their final roster.  It appears Leonard Pope, Tony Moeaki, and Jake O'Connell have those spots locked up.

It’s a dream shared every year by thousands of college football players across the country: to one day take the field with an NFL team.

The perks of the job are no big secret. There’s the instant fame, the ridiculously high salary and the opportunity to play in front of a national audience, just to name a few. But what if all of that could happen to you just a short drive from where you grew up?

The San Diego Charger has reasons to feel confident when they face the Kansas City Chiefs in the opening of the 2010 National Football League season on September 13. This developed after the Chargers successfully signed to a one-year $3,269,000 deal, outside linebacker Shawne Merriman in the next NFL season.

Merriman onboard when Chargers face Chiefs in NFL opener from RF365

Part of the National Football League’s "Play 60" league-wide initiative, the Chiefs Sports Lab is believed to be a first-of-its-kind, in-stadium learning center dedicated to teaching school-aged children the importance of sound nutrition and physical fitness. The primary objective of this new Arrowhead attraction is to help combat the threat of childhood obesity in the Greater Kansas City area.

Chiefs Sports Lab for children officially opens as another attraction at New Arrowhead Stadium from Examiner.com

So the Chargers watched myriad game film during the spring as early preparation for their Sept. 13 season opener.

"You look at Cleveland and Notre Dame, and you look at New England when Charlie was in New England," Turner said.

Chargers view Irish, Browns to prep for KC from The San Diego Union-Tribune

This one was actually very difficult. Looking back at the amazing talent that Kansas City had, it's really very impressive. Marcus Allen was incredible, Derrick Thomas was one of the best, Priest Holmes and Len Dawson were exceptional players as well. Don't forget Joe Montana wore a Chiefs uniform as well. Picking Tony out of this group was really a tough decision

In actuality, it’s a motley crew of Matts. Only one of them has ever made the Super Bowl as a starter (Hasselbeck). Only one other has ever started a playoff game (Ryan). The rest of them — save for Moore’s 6-2 mark — have losing records as starters. And Leinart still might get benched.Still, in a league of Donovans and Carsons and Trents, how can seven starting quarterbacks share the same mundane, albeit common, name?In the 26-year period from 1981 to 2006, Matthew was annually in the top five most popular baby names in the United States. Last year it dropped to 13th, due in part to Stafford’s 61.0 passer rating.

'Matt' is a passing trend in the NFL: The Book of Norman from The Cleveland Plain Dealer

"It was good to see him out there," coach Todd Haley said of Croyle. "He’s one of the guys that has to get better to help us become a good team. To see him out there and get through, with no issues, I thought it was a good sign.

"He didn’t look overly rusty, although we all had cans of Rust-Oleum in our pockets."

The national sporting press is starting to roll out its predictions for the 2010-11 NFL season. And while specific predictions don't mean much, anytime large groups of sportswriters reach some sort of consensus, they're usually right. Or at least not totally wrong.

In this case, the consensus is less depressing than you might expect.

Can the Chiefs finish 9-7? Sporting News, ESPN think so, but what do you think? from The Pitch