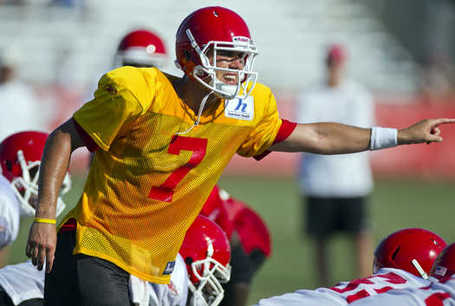 Cassel’s 2009 season had many lows, perhaps none bigger than a two-game stretch in December when he threw six interceptions with no touchdowns.

He survived that to have his best game of the season the following week, throwing for 331 yards and two touchdowns with no interceptions in a loss to Cleveland.

That kind of resiliency has Haley thinking Cassel will eventually benefit from last season’s many disappointments.

"It’s clear to me that Matt, having gone through an adjustment like he had to in so many ways … he was in a totally different role with totally different players around him, coaches around him," Haley said. "He continued to improve in my eyes. He’s a tough-minded guy. He’s tough to rattle and he’s physically tough.

"He shows a lot of signs of a lot of the other good or real good quarterbacks I’ve been around. One of those signs is that he likes football. He wants to be good. He probably wants to be great. I like that about players."

Without meaning to, a crowd of autograph-seekers gave Matt Cassel (FSY) a sharp reminder of why NFL quarterbacks are smart to stay humble.

The Monday morning practice had ended and Cassel was facing a battery of microphones and television cameras. He was explaining to reporters how hard he's been working and why Kansas City's offense should be improved.

But a few yards away, backup quarterback Brodie Croyle (FSY) was walking toward the locker room and fans behind the rope line began to chant, "Brod-EE, Brod-EE, Brod-EE!"

They got so loud, Cassel turned around to look.

"They're screaming Brodie's name over there," he said with a big grin. "Darn it."

Today: Sunny and hot, with a high near 98. Heat index values as high as 109. South wind 5 to 10 mph becoming west northwest.

Tonight: A slight chance of showers and thunderstorms. Partly cloudy, with a low around 74. North northeast wind 5 to 7 mph becoming south. Chance of precipitation is 20%.

Linebacker Derrick Johnson said Monday that, after a rocky 2009, he’s finally on the same page with coach Todd Haley.

Haley benched Johnson through most of last year, and Johnson openly questioned the decision and has said often that he disagreed with it.

"It was all of a sudden," Johnson said after Monday morning’s practice session. "I had never been through that before. Never in my life. Right or wrong, we weren’t on the same page. But here we are.

"Coach has great intentions for that. I’m not saying that. I always disagreed with me not playing."

Despite a heat index above 100 degrees, many Chiefs’ fans would rather walk than pay the $10 fee for premier parking.

"If you’re going to be here for the whole three weeks, $10 each time can get pretty pricey," Mr. Porters said. "And it’s kind of fun walking with other fans. It’s all a part of the experience."

Missouri Western State University has made some changes with the parking to compliment the fans.

Let it be known that Haley continued to praise the fourth-year wide receiver out of LSU for his contributions at camp that continued on Monday with several nice grabs.

"We’re five practices into camp; he is in my mind’s eye, clearly ahead of where he was last year at this time," Haley said after Monday’s morning practice at Missouri Western. "That’s really what all of us are trying to do is be better each day. I think if that continues as we go forward, good things will come open."

"Looking at this year compared to last year, a lot more people are comfortable," Cassel said. "I’m more at ease with my surroundings, my people and my own teammates, and they’re more comfortable with me, and it’s a nice feeling to have that."

Last season, Cassel threw 16 touchdowns but also threw 16 interceptions for the 4-12 Chiefs. When reflecting back on his 2009 experience, Cassel seemed disappointed in himself.

"It’s not at all what we wanted," Cassel said. "You learn a lot from a season like that, and we’ve turned a page and this is a new season."

For me, the Chiefs do have a "Big 3″ going in to the 2010 season. These 3 aren’t your typical triple threat. They aren’t well known around the league and no one fears them. The Chiefs’ "Big 3″ are not big because they are accomplished NFL football players. They are big because they will play a crucial part in the future of the Kansas City Chiefs.

I’m talking about Eric Berry, Kendrick Lewis and Javier Arenas. That’s right Addicts. The 3 guys mentioned above could make or break the Scott Pioli regime in Kansas City. There is a very, very real possibility, that the Chiefs will line up in their Nickel set against the Chargers in the season opener with 3 rookies being the last defenders standing between Philip Rivers and the end zone.

If that doesn’t frighten you a little bit, you aren’t human.

The Kansas City Chiefs now have the former New England Patriots Vice President Of Player Personnel, offensive coordinator, defensive coordinator and starting quarterback. While they have a Patriots-like feel to them, there is still no evidence that they can encompass the winning.

If they are to start this year, then their run would be as surprising as commencement of the Patriots dynasty back in 2001. They only won once in their last six contests of 2009 and covered just two spreads in those games. After a pedestrian offseason, there aren’t many signs that they are trending upwards.

The Carolina Panthers have signed running back Dantrell Savage the team announced Monday.

Savage, 5-8, 182 pounds, started his career with the Kansas City Chiefs after being signed as an undrafted rookie in 2008.

Walking to the other side of the field, I saw ahead in the distance. "Is that it?" I thought. "Can it be?" Yes, it was a Percy Snow jersey. That jersey is nearing 15 years old at this point.

Huge numbers were flashing before the arrival of Farm Technology Days July 20-22. Visitors to River Falls were predicted to range from 60,000 to 100,000. One forecast was for a $2.8-million stimulus to the local economy.

While a downpour canceled most of Day Three of FTD, a Journal survey found that many local merchants got anything from a mild boost in sales to nothing...

...Lundgren had two theories for what happened: 1) Either she lost regular customers because they didn’t want to bother with the expected crush of downtown crowds and traffic and/or 2) Many locals went to FTD and skipped their usual trips to the downtown.

She added: "I kind of miss not having the Kansas City Chiefs here. They brought in the customers."

This next one may have been posted before, but the part about the kid makes me want to post it to be sure. He sounds like most of AP.

The kid wore a "KC Chiefs" logo on his cap and a worshipful look on his face.

"Wow! Eric Berry can do anything!" he exclaimed, so excited his dad reached over to make sure he wouldn’t fall out of the riser.

The kid was not alone in keeping his eyes glued to No. 29 Saturday morning. Everybody in Chiefs camp was keeping their eyes on No. 29. And the rookie safety from Tennessee, one day after signing a big contract, did not let them down.

Berry Shows Up at Chiefs Practice from The Carthage Press

Saturday was a great day in the history of Canton High School sports as five individuals and four teams were inducted into the CHS Hall of Fame during "A Gathering of Giants" at Kemper Banquet Hall.

Individuals inducted on Saturday were Lucas Buckley, Boomer Grigsby, Fred Harms, William Oaks, and Dean Smith. Joining the teams in the Hall of Fame are the 1976 softball team and the 1920, 1925, and 1926 basketball teams. Unfortunately, none of the players from any of the basketball teams are still living.