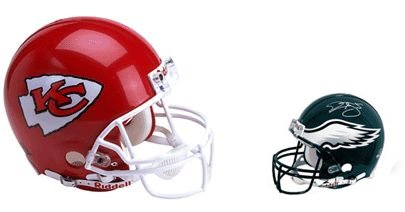 The pinnacle of the Kansas City Chiefs preseason and the NFL's preseason is happening this weekend. The third game of the NFL preseason is always the best - the starters play more, "real" plays are actually called and the roster starts to become more concrete. The Chiefs preseason games have been a little boring to watch so far so I'm excited about this one.

Tonight, the Chiefs face QB Kevin Kolb and the Philadelphia Eagles. Until now, the KC Chiefs preseason has been disappointing from a win perspective (0 wins that is) but encouraging from a player development perspective. Matt Cassel, Javier Arenas, Jeremy Horne and others have shown some good improvement over the last couple of preseason games. We should see a majority of starters play close to a majority of the game.

To get you caught up, here are some links to read before the game:

Get your score predictions in before the game starts. I'm going to call it....24 to 13 in favor of the Chiefs, naturally.
GOOOOOOOOOOO CHIEFS!!!!