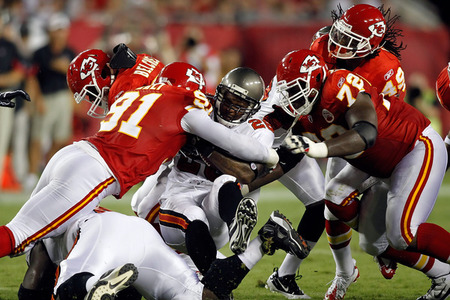 Hey all, I'm back with this week's Front Seven KPM ratings! As usual the rating system is located here. This week, due to the "starters" playing for the first half, I went ahead and graded through the 3rd quarter to try and catch some of the guys I evaluated last week. After the jump are some notes and the KPM's! Enjoy!

These ratings are starkly different from last week. It seemed the linemen made more mistakes in the run game, and our ILB's blew a couple of coverages that really hurt their scores. Here we go:

Dorsey did not play well this week. He was double teamed twice, and got a QB pressure that flushed the QB out of the pocket. However, he was pancaked once, let two free men go, and was shoved off the line once. On the second series of the game, Dorsey had a play that he let a free man by that got to Belcher, then was pancaked. If Berry wasn't there, it's a first down given up. He seemed to be very "off" this game. He did look pretty good in the nickel when he was head up over center, collapsing the pocket somewhat, but for the most part, he didn't look great.

Tyson didn't play very well either. He pulled two good swim moves, had 2 QB pressures, one of which flushed the QB out of the pocket. He followed it up with 3 free men, and was shoved off the line once. TJ didn't really get to grab any double teams, with the Bucs usually running away from him. He did seem to get good push into the backfield several times, just with some arm extension on the RT. However, he took some plays off and had a play in their last drive of the 1st half similar to Dorsey's earlier mishap: free man and shoved off the line. Two plays later, they both let a free man through to the second level. Not the consistency I was hoping for after a pretty good game last week.

Ron Edwards stepped up and played well this week. He only recorded two double teams, but didn't let any free men go, and stood his ground on the line very well. It was a stark difference from last year and previous weeks. He got rest in Nickel situations (which we seemed to run more in the first quarter) and then had Shaun Smith come in for the second quarter, but in his limited snaps, he was pretty darn solid...and that's coming from arguably his biggest critic.

Lokey didn't get a snap until the 3rd quarter...and that quarter wasn't good for him. He got thrown off the line a whopping four times, all runs up the gut. Last week he was brought in as a pass rushing NT, but seeing all of the snaps in the 3rd quarter exposed his weakness against the run. Hopefully it was just a bad week, but with both NT's in front of him playing well, he's got to step up in the future.

I definitely saw what the discussion has formed around this week involving Gilberry and Jackson's competition. He didn't see an out-and-out DE snap until the 3rd quarter, but his Nickel snaps were quality...much like last year. He had a QB pressure that forced the QB out of the pocket, but was shoved off the line once. He worked really hard on the Nickel line, disturbing it far more than Dorsey did, and garnered a couple chip blocks from the RB instead of Tamba getting them. As a 3-4 DE, he was pretty strong and was excellent at coming across the line of scrimmage to make the tackle in the center or opposite side of the field.

Smith FINALLY got some NT reps in the 2nd quarter, and looked good doing it. Once he moved to DE in the 3rd quarter, he struggled a bit, recording his two negative KPM plays (Shoved off line and free man) during that time period. He grabbed two double teams though, and like Edwards, looked strong anchoring the line. It really instilled a bit of hope to watch these two play well, and could result in a serviceable tandem.

Magee was on the field briefly in the 3rd quarter, but didn't do anything to record a KPM point.

Vrabel's KPM really doesn't look very good, but he made a lot of solid plays. He allowed a completed pass that he shouldn't have, and that was his only real KPM recorded play. However, he made quite a few first-down saving tackles. He was the guy who seemed to stay home and make sure the play didn't get any further than it did. In the Nickel, he covered well, and outside of the one completed pass, the QB really didn't throw his way. I thought he looked strong in the ILB position and played pretty well. I'm definitely looking forward to seeing him there again.

Tamba had an up-and-down night. He recorded two QB pressures, and batted the ball out of the QB's hand. However, he blew a coverage on a RB screen that should he have stayed home, he would've had a 2-3 yard TFL. As many have noted recently, he's mainly speed rushing and not using much in the way of moves to get around his blocker. He was held a couple of times, but I think we're going to have to get used to that until someone starts noticing him.

With Demorrio only playing during the 3rd quarter, he didn't see a whole lot of snaps. He was late to the gap once, but laid a whallop on the RB filling a gap after Mays hesitated. He didn't really cover well, but the CB's were the primary targets during the 3rd quarter. It surprised me a bit to see him off the field as long as he was.

Mays suffered from the same snap casualty as Demorrio. However, he was the one in that tandem that seemed slow to react. Even so, he filled one gap and completely missed another. Last week he seemed fast to the hole and like the defense featured his position. This week he seemed to have trouble picking which angle to take, and it showed that he was a step slow.

DJ was VERY hard to watch this week. For the second week in a row, he was slow to react and didn't cover very well. He was late to a gap, completely missed a gap, and allowed an important first down pass where he was playing a deep zone...deeper than Kendrick Lewis. On that particular play, the TE crossed from Tamba's side, switched to Vrabel, then Vrabel switched to...an open space where DJ wasn't. He hesitated even more than Mays did, but saw all the defensive snaps in the first half, working the 3-4 and the Nickel. One of my complaints was his consistency, but I didn't mean in this direction.

Jovan was the first-choice SILB this week. He filled a gap, missed a gap, allowed a short completed pass in front of him, and had a QB Pressure. He still looked as fast as he did last week, but didn't do as good of a job hitting the holes...partially because of the free OL's getting to the second level. He was blitzed three times...it seems Crennel likes sending him more than anyone else. Two of the blitzes, he was held as he was getting through the line, and the other resulted in the QB Pressure.

Studebaker continued his run of form. He broke up a pass, had a QB Pressure, and forced the RB to turn into the tackler once. I really liked him being on the field as the SOLB in the Nickel package. It would seem the coaching staff is pleased with his play, because he only got 1st team 3-4 snaps for one series after Vrabel came out. The one thing that really caught my eye was that

Studie's hand fighting is good. He was really pissing off the RT on a couple pass plays because the RT couldn't seem to get his hands on him. He wasn't able to really convert it into getting around the RT, but it definitely collapsed the pocket. He's benefitted from the extra help, and is really showing how well he's developing.

(Ed Note: Poor guy doesn't have an NFL.com picture yet!)

Sheffield was on the field briefly in the 3rd quarter, but didn't do anything to record a KPM point.

Pierre was on the field longer than Sheffield but didn't do a whole lot more. He didn't really show his quickness, and seemed to have trouble getting around his man in the 3rd quarter. He did what Tamba did earlier, not staying home and allowing the RB to catch an easy screen pass.

And now, the rankings for the two sections are shown below:

You'l notice that some of our starters are lower than expected. That's because they were on the field when the Defensive TD was scored. That put -3 points on all of them. When originally planning this, I wanted all of the players to be responsible for the defensive TD that were on the field. However, TJ and Tamba were in the QB's face, Vrabel, DJ, and Belcher were holding their own, and Smith had crushed the pocket. It would seem the front seven did a decent job, but Flowers' error cost them points. I'd like the community's opinion on this...should we change it to just those responsible, or should everyone bear the burden? Kalo's Edit: Went ahead and took the -3 for TD out.

For the second week in a row, Belcher and Studie stood out...but the Smith/Edwards combo really shone as well.

1. Belcher's tackling was better this week than last, and that quickness was still there. The part of Belcher's game I enjoyed the most was him being the sole ILB in the 3rd quarter Nickel. Instead of making him completely avoid passing plays, Crennel's integrating him into coverage schemes. That's only going to make him better in the long run.

2. Edwards and Smith were pretty much a dead heat in their abilities this week. I wouldn't say one was better than the other at the NT position, so shifting them in and out may not result in a dropoff, if this week is any indication. It may have been a bad interior line that they were going against, but based on Dorsey and Jackson's dropoffs, I'd like to think that they actually played well. As usual, I'll be watching this position the closest in the coming weeks.

3. Studebaker is making a ridiculously strong case to start, especially with Vrabel playing more ILB. I don't know what more I can say about the kid outside of making him my most impressive player on this team this year.

So there it is: Week two. Even though we statistically played better, it seemed there were quite a few more screwups this week. Our linebackers and safeties made a lot of tackles coming from the opposite side of the line to cover some of these up, which is good, but improvement is definitely needed next week.