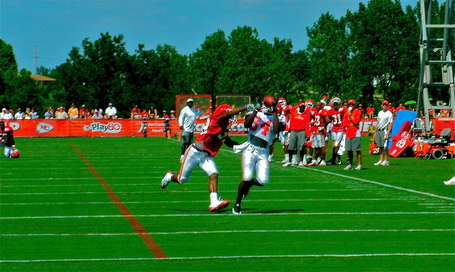 We've got this great photo sent in by a reader. Talk about great timing on the picture.

I'm not certain but I think this is the play I described here:

Brodie Croyle had a beautiful pass 35 yards in the air to Chambers landing a few yards from the end zone close to the sideline. Chambers hauled it in and might've scored if it were a game.

I was on the other side of the field (to the left in the picture).

By the way, I'll be bringing a better camera out to practice this week. I hadn't carried one (was using my phone) because I didn't want another thing to lug around but Arrowhead Pride has spoken. Better pictures coming soon.