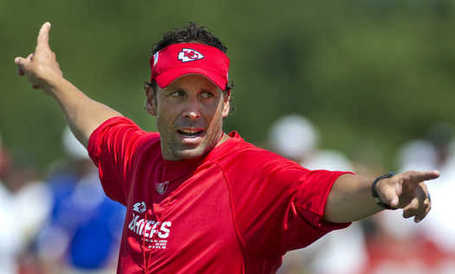 Well boys and girls, here we are. It didn't get the fancy name for another month, but one year ago today we started doing this daily post. I was searching for Kansas City Chiefs news every morning, and figured I might as well post links to save time for everyone else. Hopefully, this is a place where you keep up to date, and get a feel for what the rest of the world thinks (for what it's worth) about our team. Enjoy.

He’s not a surprise anymore, and he admits that’s different. Things changed for Chiefs running back Jamaal Charles in the last 12 months, when he went from a young backup trying to unseat Larry Johnson to a runner who’s on the fast track to stardom.

It was at this time last year that Charles declared that, whether you believed him or not, he had it in him to be great. He had the confidence, and he had put in the work. He spent much of that offseason in the weight room, and when Johnson flamed out, Charles’ work paid off — rushing for at least 100 yards in five of Kansas City’s final eight games.

Even for the NFL, a league that's famous for change, the Kansas City Chiefs seem saturated with newness.

From their relocated training camp, to their $375 million stadium makeover to the — relatively — relaxed and happy attitude of their head coach, it's a new day for the Chiefs.

The most obvious training camp difference is the added presence of thousands of happy, upbeat men, women and kids. They ring the new practice fields in St. Joseph day after day, seemingly oblivious to the heat and humidity that drape them like a heavy woolen blanket.

Fans in camp helping Chiefs train from The Associated Press

Today: A slight chance of showers and thunderstorms before 1pm. Partly cloudy, with a high near 95. Heat index values as high as 107. South southeast wind 5 to 8 mph increasing to between 13 and 16 mph. Winds could gust as high as 23 mph. Chance of precipitation is 20%.

Tonight: Partly cloudy, with a low around 74. South southwest wind between 9 and 15 mph, with gusts as high as 22 mph.

The Chiefs added just one new face to the defensive line this off-season – six-year veteran DT Shaun Smith. Upon arrival, Smith immediately became the second-most experienced member of the group outside of 10-year vet Ron Edwards. The two happen to play the same position.

After Edwards and Smith, the next-eldest member of the nine remaining defensive lineman is just 25 years old (Wallace Gilberry). Headed by a pair of top-five draft picks on the bookends, the Chiefs opted to put their faith in youth rather than free agency; particularly in the area player development.

Clear Commitment from The Mothership

The Chiefs for the second straight season are going through a training camp without a joint practice with another team. The annual summer battles against the Minnesota Vikings are less a casualty of geography than Todd Haley’s desire to do without.

Haley stopped short of saying the Chiefs would never work against another club as long as he’s coaching in Kansas City, but for now he seems to have little enthusiasm for a joint practice.

Chiefs camp buzz: No practices this season against another team from KC Star

KC Star Video: Third day of practice for the Chiefs

Jake O'Connell, tight end, Gulf Coast (2004), Kansas City Chiefs: Last year as a rookie, he started two games and played in four. He caught just two passes for seven yards, but he caught the attention of the team with his blocking skills. The Chiefs brought three rookie tight ends to camp, so O'Connell needs to continue making solid impressions in order to stick with the them.

Area players in the NFL from The Fort Meyers News-Press

Kansas City is banking on the same defense that ranked 31st against the run, giving up 157 yards per game, to come through in its second year in the 3-4 scheme.

Instead of replacing several of its front-seven starters with free agents like the Denver Broncos did in the offseason, coach Todd Haley believes if his team is to play solid defense in his tenure it’s going to be with this group.

"You can’t get everything that you want or you may think you need (in the offseason)," Haley said. "In the NFL the way that I do know that you can have continued success is you continue to develop the first-, second and third-year players you have on your team. That is mandatory. If you aren’t developing young players, you probably have very little chance at success."

On the defensive front from News-Press Now

The fans watching the Chiefs' training camp at Missouri Western haven't gotten to hear much explanation from head coach Todd Haley, as the team wastes little time talking in between drills.

But midway through Sunday's practice, the second-year coach trotted his end-of-game passing offense out for a walkthrough to show them and his defense, resting near the goal post, how a team runs last-second plays when a touchdown is needed.

After completing the first slate of two-a-days on Saturday, strength training was kept off of the morning schedule in order to give the team more time to prepare for Sunday’s mid-afternoon practice. Saturday’s two-practice day was the first major test of camp, but Sunday wasn’t any pushover either. Sunday’s full-padded practice lasted nearly three hours and was filled with plenty of intensity.

Q: Seemed like there were a lot of plays yesterday for your nickel against the run. How big of a problem was that in the whole run defense last year?

HALEY: "I think running in general was a problem. I think yesterday, the first two practices, we were strictly first and second down in order to get everybody acclimated and not install too much, Bob, we kind of followed how we did it in the OTAs, staying in base on both sides of the ball. The third practice was the day we were going to get into the nickel. Some of those run things on offense were ‘check-with-me’ or audible-type plays where it may have seemed a little heavy nickel-run. I’m glad; I like that part of the game on both sides of the ball. The run in general, we have to be good against the run to have the chance to be a good defensive team. You’ll see a heavy emphasis in both base and sub runs throughout the camp."

Q&A with Todd Haley - 8/1 from The Mothership

GlennDorsey72 Thanks for the many birthday wishes, you guys are unreal! #camplife

Adam_Schefter Fact of the day: RT @Keimer2254: Just realized this is the last weekend without football in America till February!

mitchholthus 12000 here in 3.5 days is my estimate...bout 3K per session...this is what Mankato is for Vikings...that's what Chiefs have in St Jo