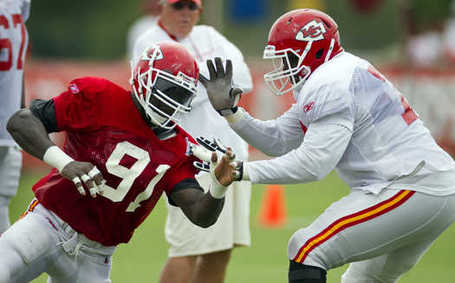 Good morning, AP and welcome to another Arrowheadlines. A lot of Kansas City Chiefs news for you today. We have a couple of stories on Wiegmann, a piece about the gentleman in charge of the Chiefs' Hall of Honor, and an article from The Wall Street Journal on fan-fave T-Rich. Enjoy!

A line of autograph seekers ringed the sideline of the Chiefs practice field on a steamy Wednesday morning. Center Casey Wiegmann made sure no one walked away disappointed.

That’s how happy Wiegmann is to be back with the Chiefs after a two-year hiatus with Denver.

"I missed Kansas City," said Wiegmann, a 15-year veteran who spent 2001-07 with the Chiefs as part of one of the most productive lines in NFL history. "The fans care about football. That’s what it’s about. That’s why I play. If the fans care about it, I’ve got to love that."

Undrafted rookie free agents typically have a tough time making the final 53-man rosters for NFL teams, especially if they hail from colleges outside of the BCS.

So it’d be easy to think that undrafted rookie wide receiver Jeremy Horne has little chance of becoming a mainstay on Kansas City’s team.

But Horne, a 6-foot-2, 193-pound speedster from Massachusetts, has been turning some heads during the Chiefs training camp.

"Jeremy Horne has done some things to get noticed," coach Todd Haley said at his press conference Wednesday. "And those are the types of guys…that have been a pleasant surprise."

"He is a football-playin’ dude," Haley said. "It’s like a pig to slop. A pig wants to be in the slop. Offensive linemen want to be in the trenches, and that’s the way they’re made or developed.

"Casey Wiegmann, if you looked up offensive lineman in the dictionary, there’s probably a good picture of him in there."

A starting role isn’t guaranteed, however.

Wiegmann has been getting some reps with the first-team offense this week, but he’s been listed as the No. 2 center behind fifth-year center Rudy Niswanger in the two depth charts Kansas City has released this season.

Kansas City’s secondary put on a show for during the Chiefs final night practice at Missouri Western.

Three different cornerbacks made interceptions during the 11-on-11 drills during Wednesday night’s two-hour practice at Spratt Stadium. Brandon Carr, a third-year cornerback out of Division II powerhouse Grand Valley State, picked off quarterback Matt Cassel by catching a ball that was thrown behind Cassel’s target. Carr had to stop quickly and turn his body 180 degrees to make the interception.

The next two picks were made by Travis Daniels, a six-year cornerback from LSU, and by safety Ricky Price, who hails from Oklahoma State. Daniels made his interception after a terrible throw by quarterback Tyler Palko while Price picked off an overthrown ball near the sideline from new quarterback Bill Stull.

Maybe it’s the dog days of training camp, but Chiefs coach Todd Haley was in rare form Wednesday morning and went at his players pretty hard...

...During a simulation of going against a prevent defense, Haley lit into backup quarterback Tyler Palko, who threw to a receiver in the middle of the field and was unable to get out of bounds.

"We have no timeouts!" Haley screamed. "Why in the hell did you throw that ball, Tyler, unless you’re dumb? Knowing where you came from (both are from western Pennsylvania), that’s probably the case."

And, this to cornerback Brandon Carr, who didn’t finish a tackle on veteran running back Thomas Jones: "He’s a 50-year-old running back, and he knows how to finish a play …"

The arrow is pointing up in Kansas City after an offseason of strong personnel moves that upgraded the overall talent level; the question is how high up it can go. There are still major holes (OL other than Waters, LB other than Hali) and significant question marks (WR, DL, QB) that make a dramatic improvement unlikely. The schedule is in their favor, especially the first three weeks: home for perennially slow-starting SD, at CLE, home for SF. If they’re 3-0, and I think that’s highly realistic, I can see these Chiefs building confidence and netting 8 or even 9 wins and threatening as a playoff dark horse. But my reservations about Matt Cassel and a very underwhelming defensive front 7, plus major depth problems all over the roster, keep me from jumping on the KC bandwagon. I like the Chiefs to finish 6-10 in an up-and-down 2010.
Kansas City Chiefs Season Preview 2010 from RealGM Football

The Kansas City Chiefs have drifted in obscurity, a joke of the NFL, since exiting the playoffs in the divisional round after the 2003 season to the Indianapolis Colts. This season, they’ve made strides that could potentially propel them from 4-12, to possible contenders in the next couple of years.

There’s no doubt that Scott Pioli has attempted to assemble a winning coaching staff. Coordinators Charlie Weis and Romeo Crennel have as much football knowledge as they do body fat. They’ve seen success; they’ve been instrumental, vital components to the New England Patriots of old. At the same time, fans have to wonder if the answers to the Chiefs offensive woes are standing on the turf of the newly renovated Arrowhead Stadium.

Chiefs could surprise from The University Leader

I have to admit, though, that Bowe fits the criteria for good fantasy value in '10. He's coming off a disappointing and much-hyped (I have my hand raised) season. He turns just 26 in September. He's an amazing athlete. And reports about him from training camp have been universally positive. I feel extremely burned by Bowe after '09, which I admit probably colors my judgment a bit, and forces me to rank him outside my top 20 fantasy receivers for '10: He currently sits 23rd on my list. But that's might be a bit too low. If you can get over the bad taste from last season, it might make sense to reach just a little bit (say, the late fifth or early sixth round in a 10-team draft) and grab Bowe as a high-upside-flex kind of player. Yes, a leap forward will require improvement from Cassel (and the Chiefs' O-line), and mental consistency from Bowe himself. But the rewards might be great.

Bob Moore has always been a history buff.

The Overland Park resident, who spent 21 seasons as director of public relations for the Kansas City Chiefs, has now made that passion his work. Earlier this year, Moore was asked by the Hunt family, owners of the Chiefs, to take on a new position, that of team historian and curator of the Hall of Honor housed in the renovated Arrowhead Stadium.

"The Chiefs and I knew what Lamar (Hunt) wanted and he knew of my interest," Moore said. "I’d been doing some of this type of work prior, but given my place in life, it was time to do this full time," said Moore, who’s 63. "This is something I always liked about the team — its background and history."

Year in and year out, college football players across the nation share the same dream: to one day take their game to the next level and play in the NFL.

The perks are no big secret. There's the instant fame, the ridiculously high salary and the opportunity to play in front of a national audience, just to name a few. But what if all of that could happen to you just a short drive from where you grew up?

Ask Ryan Lilja, and he'll sum it up for you in six words. "It's the experience of a lifetime."

For Lilja, a former Kansas State offensive lineman, that experience began March 16 when he was signed by the Kansas City Chiefs — a team that plays its home games just 21 miles from his old stomping grounds at Shawnee Mission Northwest High School. He was picked up by the Chiefs eight days after being released by Indianapolis, where he had played each season since graduating in 2003.

The Kansas City Chiefs are about to wrap up their training camp at Western Missouri State University in St. Joseph, and they didn't just paint the town red, they helped keep several area businesses out of the red.

FOX 4's Stephanie Hockridge is Working for You with the report on the team's impressive economic impact in St. Joseph.

I said yesterday that I believe the Kansas City Chiefs need to make a statement this Saturday night in Tampa. To do that some individual players are going to need to step up and make plays.

Here is a look at five guys I think need to step up this Saturday and help the team move forward.

It all starts with the quarterback. While the Chiefs didn’t really open up the passing section of the playbook in Atlanta, Matt needs to make the most of the opportunities he does get. Cassel is running out of excuses. He has some weapons out there and he needs to step up and show he knows how to use them.

Mr. Richardson is a fullback, which is one of the NFL's truly thankless jobs—and, in many corners of the league, a lost art. He blocks for the running back, protects the quarterback in passing situations and might as well show up for work with a lunch pail. But there are moments, rare moments, when a fullback finds scraps of glory.

Such was the case against the Texans, when Mr. Richardson led the way for Mr. Jones and found a safety waiting to make the tackle. So Mr. Richardson did what was necessary: "Tony just annihilated him," said Brian Schottenheimer, the Jets' offensive coordinator.

He's a Throwback and a Survivor from The Wall Street Journal

Yesterday was a sad day for Chiefs nation.  Or it should’ve been, anyway.  Jason Whitlock, one of the most talented and best known sports writers in the country, will no longer be covering our beloved Chiefs.  After 16 years, the Whitlock era is over.

I know a lot of you are glad to see him go.  You’ve made your presence felt over the years, believe me.  Whitless, Fatlock, Whitfat, Fatfat, and a host of other hilarious weight-related nicknames have sprung from your fertile loins.  Your attacks were as consistent as the poor spelling and grammar contained therein.  For you, this is a good day.  Your adversary is gone.

A Farewell To Whitlock from Arrowhead Addict