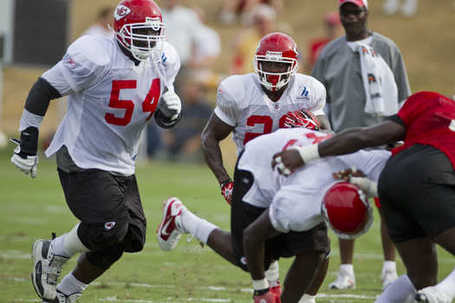 "They have been working hard and in tough conditions and with pads on in 18 out of 20, I believe, or 19 out of 21 days," Haley said. "That’s a lot of days in pads in some difficult conditions, which we needed. That’s one of the reasons I felt we were making progress."

The Chiefs held their normally scheduled practice later in the day.

But in the morning, just after the Chiefs arrived on their practice field in full gear, the players huddled around Haley for what appeared to be pre-practice instructions.

They let out a collective cheer when they received the unexpected change in the day’s schedule. They walked back up the hill and into their locker room, changed out of the practice gear and into shorts and T-shirts, and piled onto two buses headed for the Hollywood Theaters.

In an unexpected visit, Nixon arrived just before 6 p.m., walked on the practice field and watched the final 45 minutes of the workout.

The governor almost got into the action as quarterback Matt Cassel hit wide receiver Chris Chambers with a lofted pass in the corner of the end zone during an 11-on-11 drill.

Chambers caught the touchdown pass a few feet from where Nixon was standing.

Today: Scattered showers, then occasional showers and possibly a thunderstorm after 7am. High near 74. Calm wind becoming east between 6 and 9 mph. Chance of precipitation is 90%. New rainfall amounts between a quarter and half of an inch possible.

Tonight: Scattered showers and thunderstorms before 1am. Patchy fog after 4am. Otherwise, cloudy, then gradually becoming partly cloudy, with a low around 61. East wind between 5 and 8 mph becoming calm. Chance of precipitation is 40%. New rainfall amounts between a tenth and quarter of an inch, except higher amounts possible in thunderstorms.

After 16 years of writing thought-provoking and popular columns for The Kansas City Star, Jason Whitlock is leaving the paper to pursue other interests.

Whitlock joined The Star in 1994 as a general-interest sports columnist after writing for newspapers in Ann Arbor, Mich., and Charlotte, N.C. He immediately struck a chord with local readers and ultimately developed a national audience through his column and work in other media, including radio and television.

Coach Todd Haley said that, despite a breakout 2009 season and a strong performance in Friday’s preseason opener, running back Jamaal Charles’ role is "still to be determined."

Veteran Thomas Jones remains listed as the No. 1 running back ahead of Charles, a third-year back who rushed for 1,120 yards last season.

Veteran linebacker Derrick Johnson said the Monday morning movie session was a welcome surprise for all of the players.

"A lot of guys were pretty excited; we had a good time as a team," Johnson said. "Coach is doing the right thing. He knows how to take care of us. We appreciate it."

Punter Dustin Colquitt, who saw "Dinner for Schmucks," said the exercise should help the team bond.

"It was great," Colquitt said. "We all got to hang out and take the pads off."

The light-hearted nature surrounding the Chiefs’ training camp Monday morning didn’t end with the surprise trip to the movies.

Haley and the other assistant coaches convinced offensive quality control coach Nick Sirianni to practice with the team — in full pads. Sirianni donned pads and a quarterback’s yellow No. 9 jersey and trotted out on the practice field in the morning to laughter from the other coaches and players.

So far, little of what the Kansas City Chiefs have shown this summer looks any different than what they've displayed over the past few years.

That isn't good news for the Chiefs. Since 2007, they have gone 10-38, their worst three-year stretch in the franchise's 50-year history.

Certainly, the Chiefs didn't show anything in Friday night's preseason opener against Atlanta that would indicate they're better than the team that finished 4-12 in 2009. On the way to a 20-10 loss, the Chiefs' offense showed few signs of life in the passing game. Their defensive front seven was manhandled by the Falcons' offensive line, especially in the running game.

Progress for Chiefs difficult to see as pressure to win mounts from NFL.com

Taurus Johnson is the latest player to join the Cleveland Browns.

According to National Football Post, Johnson is heading to Cleveland after being waived by the Miami Dolphins last week.

The wide receiver, undrafted out of the University of South Florida in 2009, signed with the Kansas City Chiefs as a free agent. He spent last season with the Detroit Lions’ practice squad, as well as Miami’s practice team.

When the Kansas City Chiefs signed Thomas Jones, I, like all of you, was happy.  I wasn’t gushing about it or calling Scott Pioli a genius like some, but it was clearly a good signing.  Jones would limit wear-and-tear on Jamaal Charles, provide a quality insurance policy, and give the Chiefs a dose of that veteran leadership they love so well.  Finally, we had signed someone who wasn’t a former Cardinal, Patriot, or 35-year-old guy named Mike.  This move was clearly a win for everyone.

Except now Thom Jones is starting games.   I know it’s only the preseason, but I still can’t wrap my head around this.  Jamaal Charles is a much, much better running back than Jones.  It isn’t close.  Last year, he made a bad line look good and averaged nearly six yards per carry doing it.  Jones, meanwhile, locker-room-leadered his way to a paltry 4.2 yards per carry behind one of the better lines in the NFL.