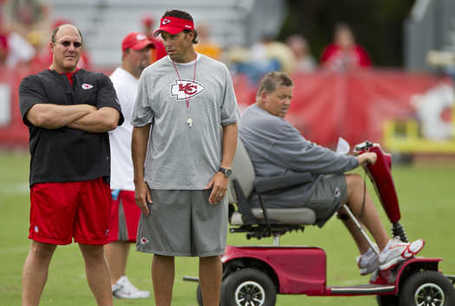 "A goal of a return man for Kansas City would be to be mentioned in the same sentences as those guys," Arenas said Sunday. "But first and foremost, you want to contribute, you want to do your job."

After giving up a field goal at the start of the fourth quarter, rookie defensive back/kick returner Javier Arenas caught the kickoff at his own 1 and ran 99 yards for an apparent touchdown. The touchdown, however, was nullified by a Kansas City holding penalty.

Haley said Sunday that the play illustrates that his team is making some positive strides but still must get better in a lot of different areas.

Chiefs get back to work from News-Press Now

Today: Areas of fog before 7am. Otherwise, mostly sunny, with a high near 85. Calm wind becoming south southeast between 4 and 7 mph.

Tonight: A chance of showers and thunderstorms, mainly after 1am. Mostly cloudy, with a low around 65. Southeast wind between 4 and 7 mph becoming calm. Chance of precipitation is 50%. New rainfall amounts of less than a tenth of an inch, except higher amounts possible in thunderstorms.

The Chiefs were down to 10 available offensive linemen when training camp resumed Sunday afternoon in St. Joseph. Three linemen — tackle Barry Richardson and guards Darryl Harris and rookie Jon Asamoah — spent the practice either walking around or on a stationary bike. Harris was injured last week, and Richardson and Asamoah were hurt Friday.

The situation at left guard has been rocky through much of camp, with Brian Waters missing part of the first two weeks because of an apparent leg injury.

"Struggled at times," Haley said. "Across the board up front, there were some good things, but there are some things that we’ve got to be better."

Strengths: The Chiefs acquired strong safety Eric Berry in the first round of the most recent draft. Overall, helping to at least partially fill an area of consistent weakness that plagued the Chiefs throughout last season as they gave up a total of 424 points.
Another positive for Kansas City is that Terrell Owens did not want to join their team and instead signed with Cincinnati. As reports swirled in July that a possible deal was in the works between the two sides Owens was quoted as saying, "Me and Todd Haley, we don’t get along." Haley, Owens’ receiver’s coach in Dallas in 2006, is now the head coach of the Chiefs. And with the Chiefs already facing an uphill climb, Owens’ controversy was the last thing they needed.

"I was very impressed that our offense was able to put together a 21-play drive.

"I thought that our ability to create turnovers was good.

It was interesting to see Kansas City Chiefs rookie receiver Dexter McCluster carry the football five times for 25 yards. It was previously thought he would work almost exclusively out of the slot, so this could be a sign of things to come.

The running game for the Chiefs wasn't bad in 2009, Jamaal Charles had the best last four weeks of the season in the NFL, over 600 yards rushing and 4 touchdowns. If he is anywhere near those numbers with Thomas Jones sharing the load, this could be the best one-two running back punch in the NFL. The offensive line will have to hold, but things are in place for the offense to be pretty good.

The defense is still atrocious. Nobody has filled Jared Allen's shoes to be the sack king and they just cannot stop the run, allowing over 150 rushing yards per game, good for second-worst in the NFL.

I think the Chiefs will begin to get better in 2010, but it will take a few seasons of going in the right direction before they are a playoff team. They'll improve to 6-10.