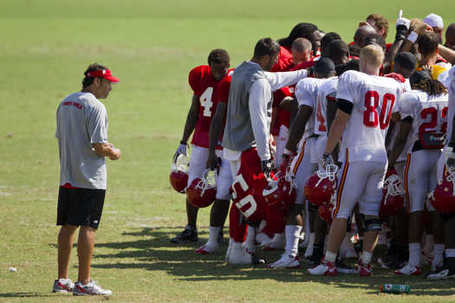 Good morning. It's football time! Chiefs at Falcons has to be better than last time,right? Tomorrow's an early travel day for me, so I won't be able to do a post. Hope you guys enjoy the game tonight.

Former Chiefs coach Marty Schottenheimer used to say few things were forgotten quicker than the result of an exhibition game. The Chiefs of a more recent vintage stand as evidence that for at least one NFL team, exhibitions can serve as an omen of things to come.

Their last three preseasons have been unproductive in terms of victories and progress toward games that count. Dismal regular seasons followed.

So while none of the Chiefs are suggesting there’s an urgency about tonight’s exhibition opener against the Atlanta Falcons at the Georgia Dome, neither is anyone proposing it’s a casual affair.

The Chiefs, who play against Atlanta at 7 p.m., tonight, used their last practice Wednesday evening to simulate conditions they’ll likely experience in the Georgia Dome. The team ran through drills and scrimmaged on the turf in the Griffon Indoor Sports Complex and even left the field for about seven minutes to mimic halftime.

Berry fits the Chiefs, in every conceivable way. Scouts say he could be the best safety to enter the league since Ed Reed. The Chiefs had a terrible secondary last season, one of the league’s worst, and general manager Scott Pioli is trying to remake the roster with solid citizens ready to buy in.

There are some who already fit (Tamba Hali comes to mind) and others who don’t (hello, D-Bowe), but nobody symbolizes the new movement better than Berry.

Tonight is the beginning of that, Berry’s first game with the Chiefs coincidentally happening in his hometown.

The Chiefs aren’t short on story lines, even in the preseason. Is Matt Cassel worth $63 million? Can Dwayne Bowe act like a grownup? Can Jamaal Charles do it again? Just how bad is the front seven?

Berry may be as important as any of them, and not just so Pioli doesn’t miss on another high first-round pick. For all the talk about Cassel not having much to work with, the Chiefs gave up at least 24 points in all but five games last season. Three opponents scored more than 40, and three others scored at least 34.

For Matt Ryan, it's all about the footwork.

The third-year quarterback is excited the Atlanta Falcons will finally play a preseason game with Kansas City visiting the Georgia Dome on Friday night.

Positive results could depend largely on how well Ryan moves inside and outside the pocket. A turf toe injury last season limited his mobility and affected his passing mechanics.

"I wasn't running around a ton at the end of the year with the toe," Ryan said. "I think any time you have a foot injury, you have to go back to basics and really make sure that you are really on top of your footwork. You have to make sure that your feet are in the right spots."

1 Matt Cassel’s poise. The Chiefs’ starting quarterback isn’t expected to play more than a handful of snaps, but it shouldn’t take long to notice a difference in Cassel — if the team’s offseason changes are working. The Chiefs added coordinator Charlie Weis and beefed up the offensive line, to say nothing of wide receiver Dwayne Bowe’s impressive training camp. Cassel might be rusty early — it is the first exhibition game, after all — but the Chiefs will need him to settle in quickly.

The Kansas City Chiefs may have a newly renovated stadium, but they’re near the bottom in a list ranking the most successful National Football League franchises, according to a new analysis.

The Chiefs were No. 28 of the 32 NFL franchises, edging out the Jacksonville Jaguars, St. Louis Rams, Oakland Raiders and Detroit Lions. The Dallas Cowboys and New Orleans Saints were Nos. 1 and 2, respectively, with the Cowboys pulling ahead despite the Saints’ Super Bowl victory last year.

The Chiefs have been noticeably lacking in locker room leadership in recent seasons, and they're making a concerted effort to rectify that short-fall. How? Well for starters, six of the seven players they drafted this season were team captains in college. They have prioritized finding leaders in the draft, and in signing veteran free agents such as Thomas Jones, Ryan Lilja, Mike Vrabel and Casey Wiegmann.

One quick byproduct of the improved leadership quotient in Kansas City: Recent first-round picks like Dwayne Bowe, Glenn Dorsey and Branden Albert didn't come to camp overweight like they all did in 2009.

Croyle somehow clawed his way back from his injury. He missed all of OTA’s but was ready to go for training camp. Matt Cassel and Tyler Thigpen were both ahead of him on the depth chart and new GM Scott Pioli brought in Matt Gutierrez who had recently been cut by the Patriots. It was only a matter of time before Croyle became a training camp casualty.

One year later, Thigpen is in Miami, Gutierrez is on the waiver wire and Croyle is the Chiefs unquestioned backup. The Chiefs are one snap away from their past once again becoming their present.

Croyle’s last significant action came in the 2009 season opener when the Chiefs went to Baltimore to play the Ravens where the QB played perhaps the best game of his career. He no longer looked like an inexperienced rookie but a prepared and experienced backup, going 16 of 24 passing for 177 yards. He had 2 touchdown passes vs. no interceptions and added a 50-yard pass to boot. He finished the game with a 116.1 QB rating. Despite his solid performance, the Chiefs still lost the game 38-24, though the game was closer than the score indicates.

A Ballad For Brodie from Arrowhead Addict